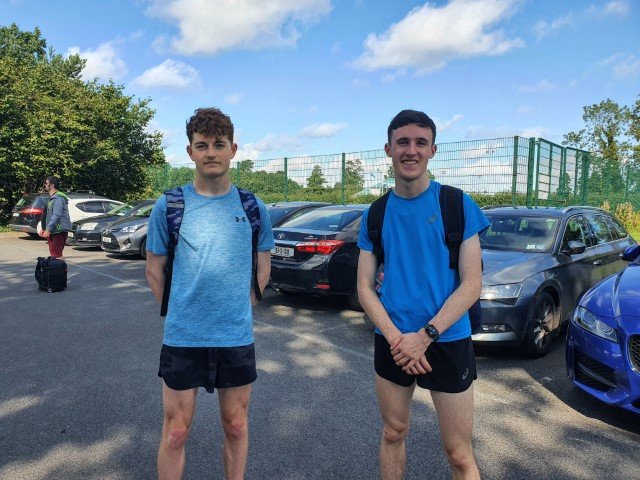 The strangest track season ever wrapped up in glorious but breezy sunshine at Santry Stadium on Sunday. Six athletes from Craughwell made the trip and all performed very well in stacked fields – Oisin Davis, Emma Boyle, Ellie Cronin, Ross McGuinness, Anthony Boyle and Ellie Cronin.

The direct links to their events are here if you want to watch them over:

First up was Oisin Davis in the Junior men’s 800m which was run over heats and a final.  Oisin had two goals – to break the magic 2 minutes and to make his first ever final.  The first two athletes and the 4 fastest losers would qualify, so times were important! Oisin knew if he was to go sub-2, the first race of the day was his best bet so he took the lead at the bell to keep the pace moving along. With 200m to go a couple of athletes passed him, when he sat in he caught his feet on the athlete ahead and stumbled, losing some momentum.  In the end he finished 5th in the heat with a slight 0.6s pb of 2.00.26 – no sub-2 today but with the breezy conditions and the stumble, you would have to think it is there soon – alas we have run out of track in 2020!!

The next two heats turned out to be quite a bit slower than the first so 5th was good enough to qualify for the final!  The final was an absolute cracker at the front between Louis O’Loughlin and Jake Bagge with O’Loughlin breaking Bagge and a 20 year old championship record en route to victory.  Oisin got caught in some traffic and the first lap was slow.  He picked it up on the second lap and felt good, but you are unlikely to set a pb with a slow first lap in an 800 – he finished in 6th place with 2.02 in the final.  Altogether, an excellent day’s work – I think the first u18 home and top-7 in both 1500m and 800m is a solid week’s work!

Emma tells the lads what to look out for in the 3000m!

Next up for Craughwell was Emma Boyle in the junior women’s 3000m.  Our plan was for a steady start and pick it up from 800m, but the field went out at a ferocious pace and Emma had to decide whether to go with it or isolate herself – a tough decision!  She came into the race with a 10.50 pb and as lap after lap of 10′ pace went past in the baking heat the inevitable payback came for a lot of the athletes in the field.  Emma got stranded between groups but held on bravely and came home in the top 10 with a very creditable 11.04 – not quite a personal best but not far off and I was hugely impressed with her resilience and mental fortitude in holding her form throughout.

Ellie Cronin had a new departure taking on the tough 400m Hurdles for the first time and decided to debut on the toughest stage!.  This event should suit Ellie as she has excellent hurdling technique.  She started out brightly but 400m is a looong sprint and as the hurdles passed her endurance started to fade.  She finished in a personal best of 1:17, but was swimming in lactate for the last two sections showing that there are massive improvements to be had in the event as she works on her endurance. 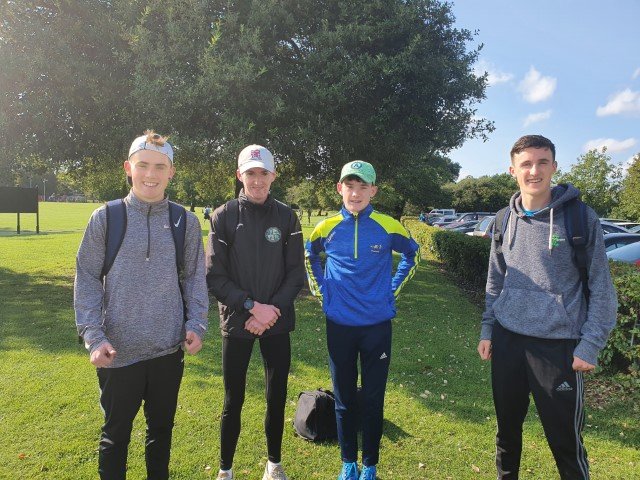 The last event for Craughwell was the men’s 3000m and this had truly incredible fields – the toughest of the day with 40 people turning up!  They were split into two heats but such was the depth of talent that both races were very very fast.  William Fitzgerald had another excellent race – building from the back.  Each time he came around I shouted “another one William” at him and he obediently immediately moved up and picked off another one – in hindsight I should have shouted “another two William” and he might have won the thing!  In the end he finished 8th overall in a near-pb of 8:57 which in my mind on that hot day IS a pb-level performance!  Next home was Ross McGuinness.  Ross had been homing for a 9:20 but for some reason couldn’t find the right pace to settle on and ultimately finished in 9:39 which was about 10s off his personal best, but still a solid showing.  Anthony O’Boyle wasn’t too optimistic heading in, but he is a really good competitor and I have never seen him run a bad race so I wasn’t worried.  He defied the heat to run to his second fastest time ever of 9:52 – as usual he raising his game to deliver a solid performance and just 3s off his PB on a hot breezy day.