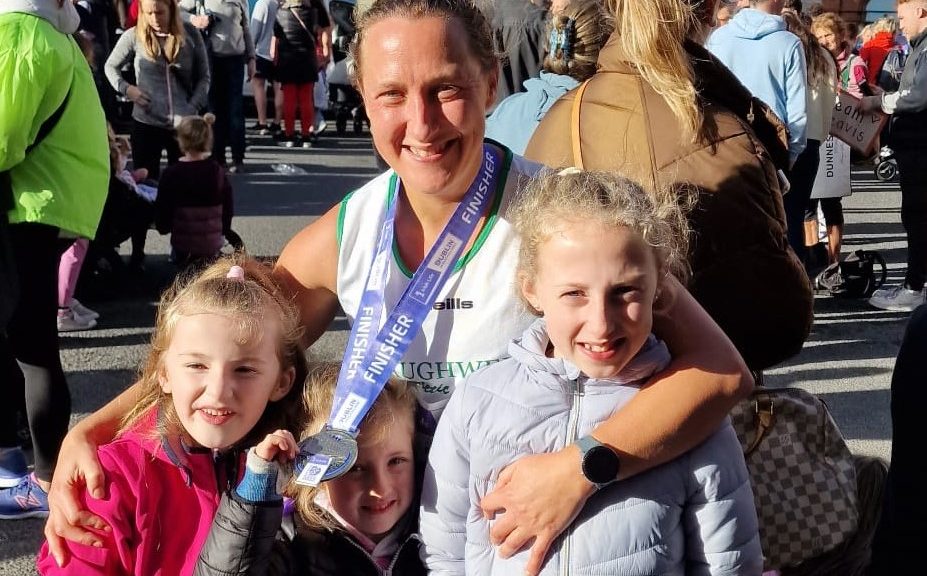 Three years in the making this marathon has been a tough one.

As it was for many, this marathon had been postponed for 2 years- that, compiled with an injury prone knee the year before meant that it has been a very long build up to this day – Sunday the 30th of October 2022. At 42 years old 42km would be my longest run to date, and possibly the most memorable one too.

The sun was shining on Dublin and the rain that had bucketed down the day before was nowhere to be seen. The streets surrounding Merrion Square were cordoned off and well sign posted for each wave. The air of excitement and anticipation could be felt by all. The pre-race nerves were building but in a positive way. We separated into our waves and made our way to the starting point at Fitzwilliam square.

The start was busy and congestion was to be expected. We moved slowly and steadily, winding our way around the Georgian Streets of Dublin and its surroundings. These included Trinity College, Herbert Park, St Stephens Green and the Phoenix Park. The running at this stage was easy and pace was good. I was trying to maintain a steady heart rate but I’m not too sure how successful that was looking back on Strava!! Support from the crowd came in waves of enthusiastic people from all corners of the country. Notably were groups from the north such as Armagh, Antrim, and Lisburn, but most importantly there was a gentleman on a corner with a Galway flag, dressed in the Galway colours to whom I shouted ‘Gaillimh Abú’ and he responded with the same. Home support meant everything.

The daunting long straight stretch of the Phoenix Park was a hard drag, broken in the middle by a familiar face of Aisling Roche and crew. Nearing the exit of the park were some of the Zoo keepers full of enthusiasm. The long up hill bend at the back end of the Phoenix Park proved tough but the crowd again were incredible, even some of the runners were cracking jokes at this stage. We turned a corner around Inchicore / Dolphins Barn (forgive me the memory of all the different areas are a bit muddled) and there were literally hundreds of supporters along route, this meant a LOT. The crowd were amazing and honestly each one that shouted ‘Up Craughwell’ or ‘Go Aoife’ helped immensely.

Crumlin was next and with it a light shower of rain fell. Nothing to worry about but if anything, it felt a bit refreshing. Kimmage road and Templeogue proved to be my toughest mile. It came as a surprise to me that mile 16 was hard. Id been here countless times recently and knew that I could do better. My pace dropped and I could feel it. Another familiar face greeted me and spurred me on – Katie Gorman your cheers were amazing, clearly an experienced marathon runner who knew what I was feeling.

A tough uphill faced us as we approached the 20-mile mark at Milltown Road and it took every effort in my heart and soul to get up that hill and not walk it. There was a guy in full fireman gear pushing up the hill alongside me and I thought to myself if he can do so can I. Mile 21 was one of the toughest. I can’t say I hit the wall at this point because in no way did, I wanted to stop but the legs were hurting and the daunting fact that there were another 5 miles to come was playing with my mind. “One mile at a time” was the mantra that got me through.

At mile 22 – I think, there was another hill and on that hill was a guy (clearly a runner) telling us to maintain our pace and stride and the top of the hill was just at the bend -great advice!

After that there was a steady incline up to the UCD flyover and a steady downhill (that really didn’t feel like a downhill at all) on Stillorgan road. The waves of support started to increase and merge into one long line of people cheering, the end was near. Merrion Road signified mile 25 and my only thoughts were of the finish line. “Go Aoife!” came from the left and the familiar face of Helena Gorman was a welcome distraction. That mile felt like it went on forever.
My family were about 200m from the finish line and the sight of them brought a tear to my eye. It was a long road to get there through injury and deferrals, a tough road to run but a great experience over all.  The sun was shining and my heart was full. Every ounce of energy that I had was left out on the road behind and the feeling of achievement was intense.

Dublin you were beautiful today…. And may well be again.