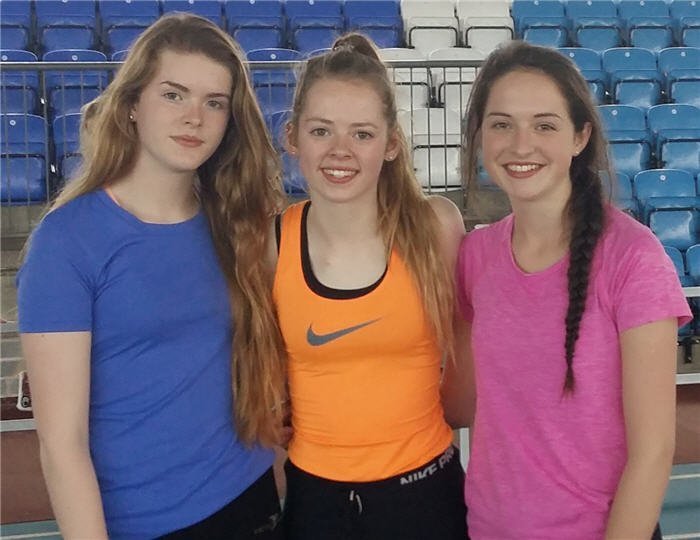 The eagerly awaited Connacht Schools Multi Events took place on Thursday in the Athlone International Indoor Arena with some fantastic performances by athletes from the club while representing their schools. It was possibly the most successful multi-events competition ever for the club with all 3 podium places in the Intermediate Girls, top 2 in the Junior Girls and second place in the Junior Boys all coming the way of the club. Results aren’t available in the other age groups as yet.

A highly competitive Intermediate Girls grade saw Aisling Keady take the Connacht title with an impressive points tally exceeding 2800 which included a 5.11m long jump (Aisling’s first time over the 5m mark) and a 2:40 800m which was a massive improvement by almost 20 seconds on Aisling’s PB. In second place in keenly contested event, Lorraine Delaney took the honours with a points total approx. 2700 with Laura Cunningham in 3rd with approx. 2600. Caoilin Milton (Calasanctius) and Ciana Reidy (Loughrea VS) also placed highly – most likely in the top 6 when results are confirmed. The standard was top class and this was particularly obvious in the high jump where Aisling, Lorraine and Ciana all cleared 1.50m and in the long jump where all 5 girls jumped brilliantly.

Also in the honours, Leanagh Gilligan (Loughrea VS) and Ciara Murphy (Calasanctius) took the top 2 places in the Junior Girls with Leanagh particularly impressive in the hurdles.

Aisling’s long jump catipults her into an exclusive club of long jumpers who have surpassed the 5 metre barrier in girls long jump indoor or outdoor:-

Some of the participants in Connacht Schools Junior Boys Pentathlon 2015

In the Intermediate Boys event, there were also some great performances with Daniel Callanan-Forde, Jerry Keary  (both St Raphael’s) and Matthew McKernan, all leaping massive jumps close to the 6m mark and Ben Garrard (Calasantius) and Cian Waters (Pres Athenry) also putting in solid performances. While the results are not out yet, all should place in the top third of the field. And in the Senior Boys, Adam Flynn (Pres Athenry) competed exceptionally well including a 5.70m in the long jump, a huge PB for him and a performance that will put him well in contention for a medal.

In the Minor Grade, the club had a large number of athletes taking part including from Pres Athenry Sarah Callanan, Mia Waters, Tara Lydon, Ellie Cronin, Kyle Moorhead and Finbar McFadden and from St Raphael’s Ryan Gallagher,  and Ciaran Connaughton. Results are not yet available for the minors so I will update this article when they are available.