We were treated to a real spectacle at the AIT Grand Prix on last Wednesday night. With our U13 boys and girls relay teams also in action on this international stage, it was a special special night. The U13s were magnificent, both relays winning their races to the rapturous applause of the capacity crowd – great experience for these young athletes. For the history books, our champion U13s were:- …

The videos of their races are up on facebook – take a look, they are spectacular.

And what can I say about the elite events. To have such a host of international stars competing practically on our doorstep was fantastic. The master of the night was the amazing Mutaz from Qatar where he proceeded to set a new Asian high jump record and have 3 solid attempts at the world indoor record which was set way back in 1989 before any of us were born 🙂 by the mythical Sotomayor from Cuba. Mutaz and his younger brother Muamer were the star attractions and captivated the large audience with an elastic display of jumping as they bounced along the tartan and twanged up and over the high jump bar. Muamer cleared 1.28 which only for his brother would have been an all-comers Irish record. But his brother had other intentions and proceeded to clear the next 2 heights before the bar went up to the incredible 2.41 height – just an inch shy of 8 feet!!!! As he eyed the bar, with a loud roar he started the slow hand-clap for the crowd. As the clap accelerated so did Mutaz, gliding over the blue boards and bang up and over by a comfortable margin to the deafening cheers of the crowd.

At this point, the entire arena had ground to a halt as all eyes were on the young Qatari as he eye-balled the bar at the amazing height of 2.44m. With his by now trademark roar, he got the crowd going and sprung into action as he ricocheted across the tartan. Alas a world record was not to be on this occasion and the bar tumbled 3 times. But it was a wonderful show and a privilege to have been there. Well done to the Barshim brothers and their coach Stanley from Poland whom myself and Cathriona were lucky enough to be able to nab after the event for some advice. Imagine being able to get some advice from the coach of the soon-to-be world record holder! And if you click on youtube and search for 2.41 mutaz Athlone, you can see a gang of us watching in the background as Mutaz soars over 2.41 including coaches Eddie, Tracy, myself and athletes Cathriona, Shauna, Laura, Jerry, Aoife and Lorraine.

It was great also to see 2 of our top athletes Conor Duggan and Sinead Treacy in action in the heats of the elite 60m races. Both athletes did themselves and the club proud!! The night wrapped up with another spectacle – this time the first time ever that the magical 4 minute mile was broken indoors this side of the border. The honour fell to the American athlete Ben Blankenship, training partner of Ciaran O’Lionard who looked likely to be the one to take the honours but faded in the last 2 laps.

And click here and here if you want to see our fantastic U13 relay teams in action at AIT!! 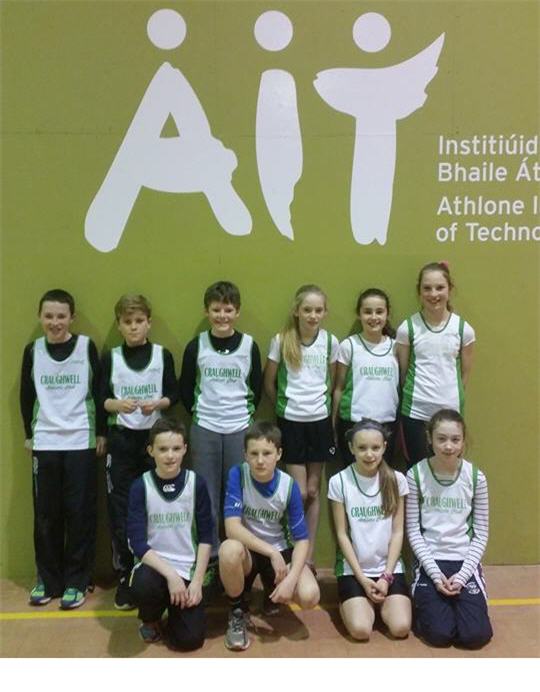