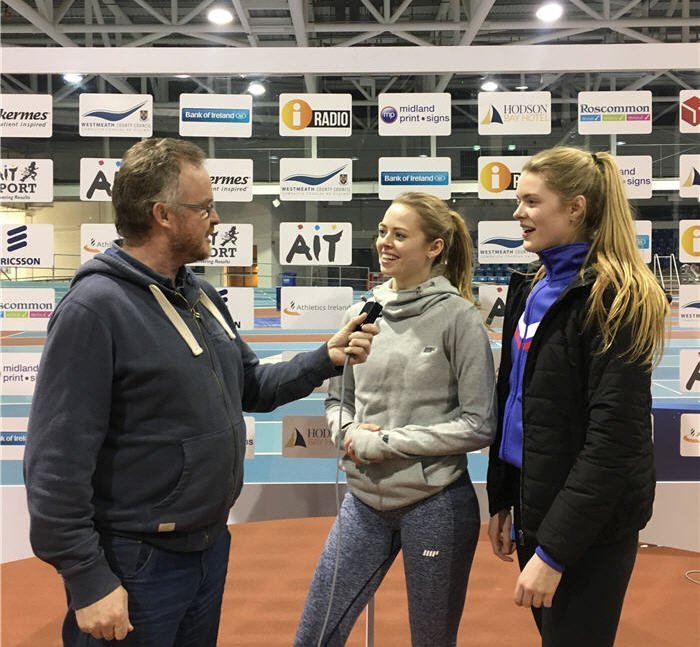 A massive well done to Ciaran O’Cathain and his hard-working team in Athlone IT for pulling together another fantastic night of athletics at the AIT Grand Prix graced by some of the biggest names in athletics and some magic moments on the night.

A packed house witnessed some fantastic spectacles including the historic mile run by adopted local hero John Travers who becomes the first Irishman to break the magical 4-minute barrier indoors on Irish soil. Travers had a number of attempts at the mystic mark while in college in AIT a few years just missing out on a number of occasions. But there was no missing out on this occasion as he blitzed around the track crossing the line in 3rd place in a time of 3.59.40. 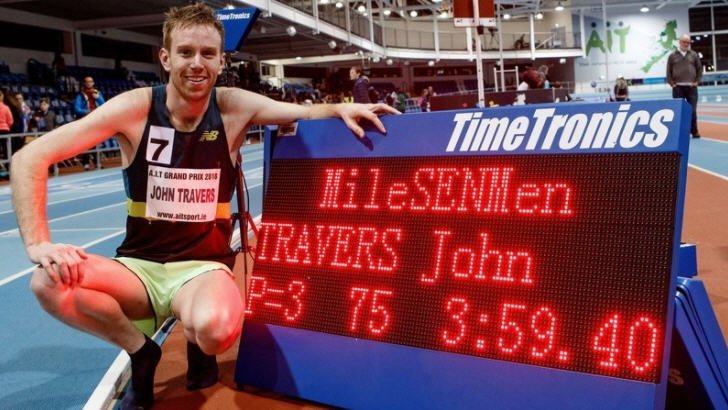 The night kicked off with some exhilarating performances in the 3 juvenile relay races including our very own 4x200m relay teams. First into the fray were the U13 Mixed Relay team of Cormac McFadden, Grace Keaveney, Jamie Collins and Muireann Leen who raced to a brilliant 3rd place in their 4x200m. They were followed swiftly by the U13 Girls team who powered around the track to take a brilliant 2nd place with their team of Siobhan Carr, Aoibhe Donnellan, Chloe Hallinan and Niamh Duffy. And the top-notch performances continued the next race where the U13 Boys team swept all before them to take victory in their 4x200m with their team of Eoin Spelman, Conor Gilligan, Eddie Silke and Evan Moran.

Meanwhile the men’s pole vault competitors were warming up where we had the privilege of witnessing the current and previous World Champions in action … USA’s Sam Kendricks and Canada’s Shawn Barber amongst others. Kendricks and Barber didn’t disappoint with massive 5.60m clearances, Barber clipping 5.70m and Kendricks going on to clear 5.70m but just fail to set a new stadium record of 5.80m. An exciting high jump also concluded with Irish Indoor champion Barry Pender sharing 3rd place with a leap of 2.19m – our own Jerry Keary had finished 2nd to Barry a few days earlier at the Irish National Senior Championships. 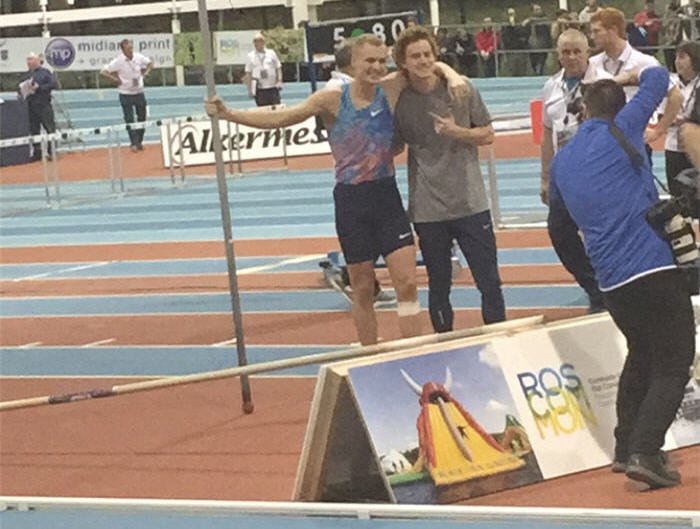 Kendricks and Barber after the pole vault

There were some incredibly exciting races on both the sprint track and circular track with the highlights being an absolutely cracking 400m race where the great Thomas Barr put his heart and the crowd’s hearts on the line when leading the race into the final 100m before being passed just prior to the final bend and with the crowd willing him forward on every step, he surged again with 30m to go to retake the lead and cross the line in 46.94 to the joy of an incredibly partisan crowd. The excitement of this race was matched in the men’s 800m where Mark English ran an absolutely cracking race to very almost take the victory on the line in an incredible 1.47.48 just 3 hundredths of a second behind the winner. What a talent!

And the night was rounded off by the brilliant mile run by the aforementioned John Travers – who is not only 1 of the most talented Irishmen in athletics but also one of the humblest. I can remember a couple of years ago him unselfishly assisting as an official at a Universities track and field in Athlone, not something you will see many elite athletes do. Its wonderful now to see it all coming together for him.

So another Grand Prix comes to an end, a mighty occasion in front of a full house and hopefully there will be many more to come.