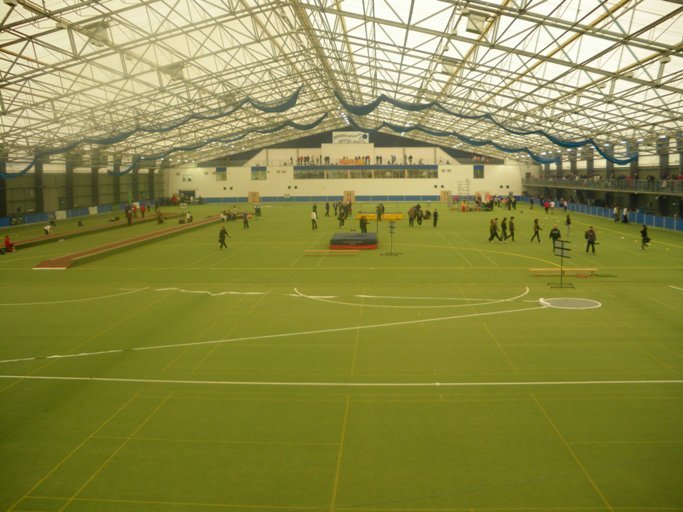 Craughwell athletes faced the long trip north to Magherafelt in Co. Derry for the second weekend of the National Juvenile Indoors. Magherafelt boasts the largest indoor sports facility in Europe with a huge building enclosing 2.5 acres of a carpet-clad playing field.

The track was very different to what we are normally used to – being a flat 300m track laid out on a type of industrial carpet. The facility itself was well worth seeing and as far as I know was built by the local district council in Magherafelt. Frustrating how it seems that every other Government in Europe can fund such facilities for the health and well-being of their communities, but here we aren't even encouraged to provide such facilities, have to acquire our own site if we want one and have to beg for grants and other funds to build it.

In the case of the fine astroturf facility in Craughwell, we felt very fortunate that we got a Government grant of €100k towards the facility – but if you broke it down, the construction of the facility almost certainly resulted in more than this been paid to the Government in VAT and income tax. And you can bet in the current economic climate, it will become even more difficult to get Government grants for this sort of project.

Anyway, back to the athletics. Craughwell had a smaller group participating on this occasion due to the long trip north.

On Saturday, we had four individuals in action and on Sunday 4 relay teams. Cathriona Farrell was the first into action on Saturday in the U18 girls high jump. Joining the competition at 1.55m, Cathriona easily cleared it and the following height of 1.60m. At this height, only 1 other jumper went clear – Mary Kate Lanigan from Kilkenny, who has been the main oppostion for Cathriona in most high jump events in the last two years. So up the bar went to 1.65m and again Cathriona effortlessly cleared it, with the Kilkenny girl going clear also. Expecting the next height to be 1.70m, we were surprised when it went to 1.68m – but on checking the juvenile competition rulebook later on, it says there that it can go up in 3's after 1.60m. But whatever the height, it didn't matter to Cathriona as she sailed over both 1.68m and 1.71m on her first attempt, demonstrating supreme ability and focus. The Kilkenny athlete cleared 1.68m but knocked 1.71m on each attempt. So gold for Cathriona yet again and another National title to her collection! 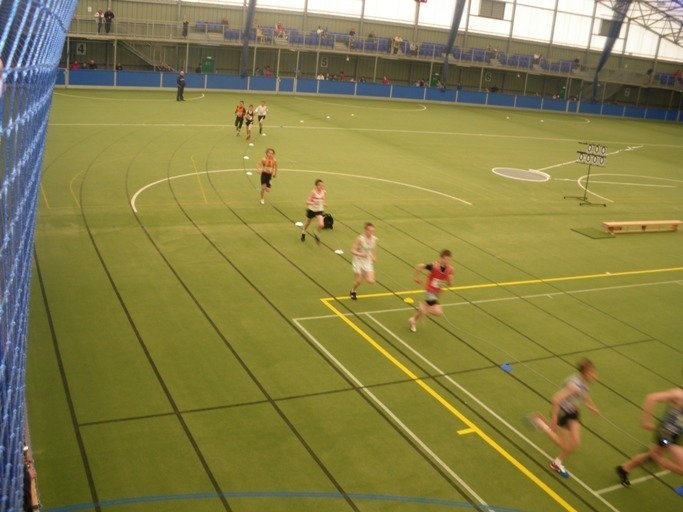 While the high jump was in progress, Conor Gillen lined up for the U14 boys 800m. Prepared for the possibility of heats and a later final, it turned out to be a straight final due to the numbers participating – something that suited everyone as its difficult to run two fast races on the same day. There was a difficult start to Conor's race with elbows flying and Conor was to the back of the field but rapidly moved up in the first 100m to sit in 4th or 5th place. Looking very strong, Conor stuck with the hard pace and moved up another slot into 4th place.

As the bell went for the final 300m lap, the leading runners put the boot down and Conor responded too, moving into 3rd place on the bend and holding this place as he raced down the back straight and onto the final bend. 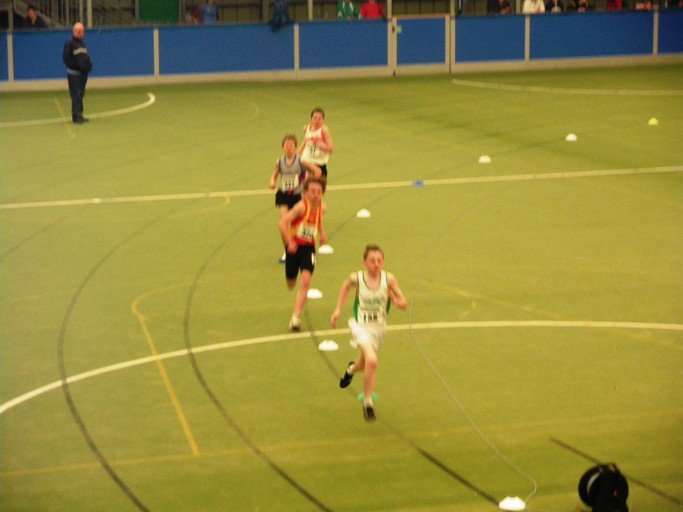 Visibly struggling at this point, Conor glanced behind to see how close the chasing pack were. Hanging on as best he could down the homestraight, Conor did his absolute best to hold 3rd but was overtaken by a Dublin athlete in the final 30m and had to settle for 4th place. It was a fantastic performance by Conor – running an exceptional 2.20.49 and very unluckly not to take a medal. His time set a new club record for his age group and was only 1 second slower than the time which David Concannon set in the Connacht indoor 800m this year – and as we know, last weekend David had an incredible run to take 4th place in the U16 1500m in Nenagh. So Conor can hold his head high to be in such company.

Next into action was Ashley McDonnell in the U17 girls long jump. Ashley's target was a new PB in this event, having claimed one in the Connachts this year and edging ever closer to a 5.00m jumper. The long jump was probably the only event of the day which was a bit challenging from athletes, spectators and coaches perspective as it was positioned 70m from the viewing gallery on the far side of the building and was on an elevated platform which has been assemled on the playing field, with rubber tiles forming the runway. Ashley's first jump was a respectable 4.42m. Perhaps it was the surface or perhaps it was the long journey, but unfortunately for Ashley she didn't improve on that in her 2nd and 3rd attempt and was dissapointed not to get a new PB. But with more competition coming up in the schools and club outdoors, she will definitely add to her PB in the summer competition.

Final competitor of the day for the club was Maeve Curley in the U18 girls 1500m walk. Maeve adopted a strong position early in the race in 3rd place. The leading two walkers tore away and opened a substantial gap quite early in the race of perhaps 100m. As the race unfolded, Maeve edged away from the rest of the group and slowly started to close the gap on the leaders. With two laps to go, Maeve was motoring and visibly you could see the gap narrowing. With one lap to go, there was possibly 50m in it and Maeve was still flying. Rounding the last bend, the gap was down to perhaps 20m. Maeve kept closing but ran out of track and took 3rd place in a new PB of 7.15.49 and only 3 seconds behind 2nd place.

Onto Sunday and the relays. Unfortunately I was unable to stay overnight for this and had to rely on a minute-by-minute account from Brendan Treacy on the relays and regular text updates from Triona and Martin!

The U13 girls were on first with their team of Ellen Treacy, Dandy Murray, Ellen Fitzpatrick, Sinead Treacy and sub Katie Donohue. In their heat, the girls performed their usual perfect baton passing and won their heat to take an automatic qualifying spot for the final. The U13 boys team of Conor Duggan, Gavin O'Toole, Jamie Spelman, Aidan Conneely and sub Conor O'Donoghue were up next in their heat. Running confidently, it came down to a photo finish between Craughwell and Brothers Pearse from Dublin for the heat winner … at this point, I'm not sure if we qualified in first place or on fastest times, but the main thing was we qualified for the final.

Then the anxious wait for the final, and the more anxious wait for the phonecall or text message after the final. Then the call from Brendan … "the girls came 3rd in the final". A fantastic performance. For this team, this was a super reward for years of hard work – having been very unlucky on two occasions in Connacht finals to zone fault once and miss out on qualification by 0.01s another time. Well done girls! Then onto the boys final. And a live commentary from Brendan for this one as I waited on the phone line. "Just starting now", "Conor off to a good start", "Passing to …. " the noise drowned out Brendan's voice. Lots of noise and screaming in the background … had an official taken Brendan's phone from him? No, back he comes. " Jamie's got the baton now, he's really flying. Looks like we're 2nd, no leading." "Jamie to Aidan", "Come on Aidan", "Aidan he's", "Aidan", "Aidan's in", "GO ON", "GO AIDAN", "1m ahead", "2m ahead", "He's got it" "YES YES". A fantastic race and fantastic gold medal for this super team. Their finish time was an incredible 54.97. The old National record was 55.something so we smashed the record but there is a questionmark over whether it will be regarded as a new record or not because it was set on a 300m track.

The U12 boys and girls teams were on in the afternoon. The girls team of Tara McNally, Caoimhe Reidy, Grainne McDaid, Hannah Rabbitte and sub Jean Waters ran strongly to qualify for the final on fastest times and took 5th place in the final in a good performance. They were National medallists in last year's outdoors and undoubtedly will be back in the shakeup again for National medals in the future. The boys team of Eddie Madden, Niall Broderick, Oisin Coppinger and Ian Connolly put in a strong performance to take 3rd place in their heat in a fantastic time of 60.9 and just miss out on making the final on fastest times. Again for this team, they were National medal winners last year and will be back in the shakeup for medals in future competitions. And a quick word on their time of 60.9 … its faster than last years Craughwell U12 team who as you see above are now the National U13 Champions and National Record Holders!

Full results of day 3 and 4 are on AAI website.