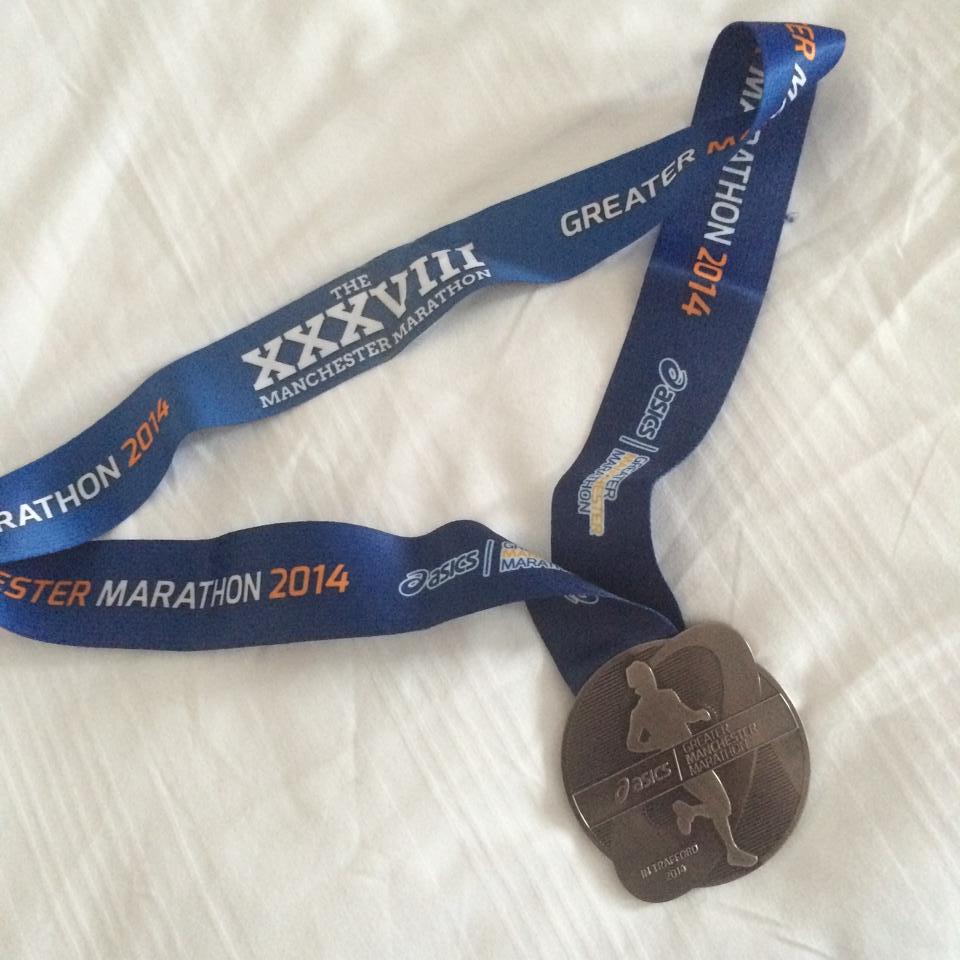 I flew over On the Saturday From Dublin & collected my Race Number that evening at the race village although there was the option for overseas runners to collect their number on the morning of the marathon.
The Start and Finish is at Old Trafford. I stayed in The Premier Inn Old Trafford,5 minutes walk from the Exchange Quay tram stop and a five minute easy jog to the race village
I woke up to a grey and dull Manchester morning which all weather reports incorrectly said would turn into heavy rain at about 11, in fact, apart from a few spots, it never rained at all.
After Breakfast (the usual Porridge & coffee combination) I then went through half an hour of the usual indecisiveness about running with or without base layers before deciding to go with it as it felt cool outside that morning (1st Excuse/Mistake!! )
When I reach the starting point there were massive number of people and it was announced that nearly 7000 are doing the marathon instead of predicted 5000.
I found the 3:30 pacer and 15 minutes later we dutifully started shuffling to the line, once we were off it was more a case of being aware of the runners around you as in the opening miles Manchester can be very congested ( traffic cones and traffic islands to negotiate around and I found myself at certain points having to jump on to paths to avoid running in to other runners – this would later be my downfall in the race)
The first few miles are run around Salford quays and the Old Trafford stadium before heading away from the city and off towards the half way mark in Altrincham.
My running felt pretty good and I was easily keeping up with the pacer (the plan being to hang on as long as possible @ 8 Min Miles / 5 Min KM’s)

Going Through The 5 & 10 K markers I was bang on pace and felt good although I was starting to feel myself getting hotter as the race went on. At The Half Marathon Marker my time was 1:45:20.
For The Manchester Marathon, water was being distributed at the water stations in plastic pouches “ICONIQ”, for me this would be a problem as I usually carry soluble electrolyte tablets with me which I put in the usual 250ml bottles that are given out at races at home, to solve this problem I brought my hydration vest which carries 1.5 LT of liquid but on the day of the marathon I found myself drinking a lot more that that as the day got warmer.
There were a few out & back sections where the faster runners passed us on the opposite side of the road & that was interesting to see the progress of these runners.
To be fair there wasn’t too much scenery and a lot of the course was flat with few gentle hills, A great feature of the Manchester Marathon are the various choirs, rock bands, church groups and brass bands offering support and entertainment throughout the route

At somewhere around Mile 14 I found myself in a bunch of maybe 12-15 runners and for whatever reason took my eye off the road for a split second, then some of the runners in front of me split as there were traffic cones in their way I jumped on to the path to avoid running in to the back of the runner in front & when I came back off the path and on to the road I instantly felt a twinge in my left knee. Leading up to this marathon I had run in Clontarf /Howth & Connemara Marathons with MCI in Feb and March & had a few issues with my knee tightening up but as these were hilly marathons the mix of Inclines & flat running offered some relief & I didn’t really worry too much about it.
I Carried on for another few miles & hoped the knee would settle down and this is where it all started to go wrong. I noticed a twinge in my Left Calf (which I felt might have something to do with my knee) , and my legs just felt empty & I was starting to limp badly, my knee just felt like it was getting tighter ( Basically Like no oil in the joint) this led to miles 16 onwards being absolutely brutal. It was at around this point a I rang my wife Maureen who I knew would be at the finish to let her know it was game over & it was all about just getting home, at this stage I knew my race was over.
As the race went on I had to play a game with myself where I would tell myself to run/shuffle the next mile then walk for a minute. When I got to 20 miles I literally had no idea how I was going to do another 10k. At mile 23 I had to pay a visit to The Red Cross tent, at this stage of the marathon the roads are always full of runners suffering cramp etc the medics in the tent were flat out when I arrived – credit where credit is due they did a great job & strapped my knee up as best as possible, I can still remember them laughing and joking about time penalties for medical treatment !!
Forced into alternately running and walking to nurse my Knee I was just about managing my pace, the crowds on the last stretch of Chester Road were really supportive spurring me on, in the final yards
As we got back in to Stretford the support was amazing and the crowd really picked me up and with 2 and a bit miles to go I could see Old Trafford and managed to pick up the pace, at the last left turn onto Sir Matt Busby Way, I spotted Maureen in the crowd at the start of the home straight & this gave me the motivation to push on to the finish.
I finally Crossed the Line In a time of 3:51:34 not anywhere near my fastest time but honestly I was happy just to finish, it was a tough day & mentally one of the toughest races I’ve done so far.
In summary, a decent marathon, the course was relatively flat( probably too flat – found it hard on the calves compared to other marathons I’ve ran) a few inclines and bridges, easy to get to, plenty of hotels nearby. But not a wow factor, if your comparing it to the likes of Dublin or some of the other Big City Marathons