In yet another fantastic display of innovation and initiative from our Athenry AC neighbors, we will be treated to a night of true quality running on Saturday week.

They have arranged for some open races (5k, 1 mile for men, 3k, mile for women) that will allow ordinary runners to experience what track running is like.  I hope that some Craughwell athletes will make an effort to participate.  As you may know, I am out of action with achilles injury, but may just chance bringing the spikes to take some part in the festivities.  After we have huffed and puffed our way around, they have arranged for some superb quality races to entertain the masses.

Practically every runner in the 5k race would be leading home any average road race around these parts.  Among this top quality field, we have some real stars who may end up gracing our TV sets in the next Olympics.  I have only a loose idea of who's-who in the running world, but I would guess that rising Ugandan star Isaac Kiprop has to be the pick of the bunch.  A couple of weeks ago he came home second in the 2006 Nike BMC 5k held in Solihul.  He finished in 13:41:59, almost 10 seconds ahead of the first placed European. 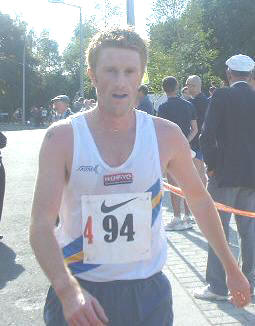 We also have names like Peter Riley (pictured left), UK 10K champion and winner of this years UK Cross Country at Parliament Hill and Ben Noad – former winner of the streets of Galway.  Of course Athenry's own Paul McNamara – double Irish 10K road champion and national short-course XC champion, will also be there – I think it's his hard work and high-standard connections that have managed to get this together.  GCH's Gary Thornton is in excellent form recently and I expect him to push Paul close for the honour of first Galway man home.  I am not sure if either of them will be confident of being first Irish man home – such powerhouses as Joe McAllister, Killian Lonergan, Mick Clohissey and Mark Keneally will all have something to say about that.

In addition to the 5k, we also have a high quality Mile race.   The field is more mixed here and if all the runners turn up some people will need to fight hard not to get lapped.  There are still some class acts, and we have a chance that the four minute mile could be broken for the first time west of the shannon.   The best contender for this might be Gary Murray (St Malachy's), who is among the few Irishmen that managed to break the hallowed target in 2005.  Pushing Gary to the limit will be young gun Colin Costello (Star of the Sea/Arkansas).  Colin is the current Irish Junior 1500M record holder and trains in Arkansas under the same coach as Alastair Cragg, so he should be at that level now.

Scottsmen Darren Gauson and Mark Pollard both have 1500M PB's in the 3:45-3:50 range so might be able to press for four minutes if all works out well for them but I can't see them beating Gary or Colin.  I would say that we would need to see the absolute best from these Athletes if they are to produce a 4 minute mile, so I don't think on the relatively spongy/slow Dangan track that it likely that any of them will pass Roger Bannisters watershed.   However, there IS a reasonable chance – and that should be worth seeing in itself!

I'm afraid I don't know anything about the ladies race – I expect Orla O'Mahony to be favourite – simply because she's the only one I've heard of before.  If people are more knowledgeable, or have other ideas on who will be worth keeping an eye on in the mens race then please use the comments feature below to provide your inputs… please excuse my ignorance!!

Fair play to Athenry for arranging this – hopefully it gets the support and interest it deserves.  The action starts at 5PM on Saturday July 8th in Dangan.  Check out the Athenry AC Website for more details.