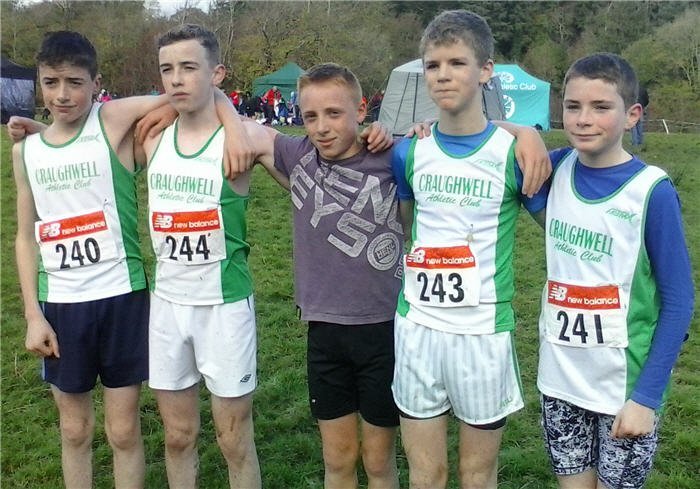 Westport House provided its familar tough cross country challege to athletes from the club in day 2 of the Connacht Chanpionships today. Mixed weather conditions made it a tough day for the athletes but nonetheless they battled to some brilliant performances.

Leading positions on the day went to Jack Miskella who placed 5th in the U19 Boys 6000m and sister Ailbhe who put in a splendid performance to place 6th in the U15 Girls 3500m, with Mathys Bocquet also placing 5th in the U11 Boys 2500m. Ailbhe’s 6th place finish is just reward for the one of the most dedicated athletes in the club who has attended an incredible 42 training sessions this Autumn.

Two teams from the club finished in the medals with the U13 Boys and U15 Boys taking the accolades. And it was hard luck for 3 more teams who were just pipped for the top 3 places but still qualify in 4th place for the All-Irelands – particularly so for the U11 Boys who came 4th on countback to home club Westport.

The day got underway with the U11 Girls 1500m where we placed 7th with 167 points led home by Isabella Boland in 32nd place and followed by 35 Erin Doyle, 44 Sole Lopez, 49 Nicole Clarke, 50 Muireann Leen, 53 Claudia McGuinness, 56 Holly O’Boyle and 64 Jenny Cloonan. The U11 Boys 1500m was up next where the team scored 90 points to place 4th with 5 Mathys Bocquet, 14 Evan Moran, 34 Liam O’Connell, 37 Lucas Keane, 42 Cormac McFadden, 43 Adam Jordan, 53 Callum Brady and 66 Eamonn McGlynn. The boys were unlucky to just miss 3rd place, tying on 90 points with 3rd place Westport who took 3rd place by virtue of a higher place 4th finisher – the harsh rules of cross country.

In the U13 Girls 2500m, the team put in a marvellous performance to take 4th place with 3 of the team out of age. The team scored 80 points with Saoirse Moore and Clodagh O’Meara leading the way in 15th and 16th place, followed closely by Fauve Aylmer 22nd and Jade Moorhead 27th. In the U13 Boys 2500m, the team claimed a splendid bronze medal with 85 points led by Ross McGuinness in 11th and the rest of the team packing well with Eoin Byrne 23rd, Darragh McCartin 25th, Evan Hallinan 26th, Daniel Galvin 28th, Ben Brady 36th and Noah Keane 42nd.

The U15 Girls 3500m saw yet another 4th place finish for the club with the team scoring 75 points and led by Ailbhe Miskella 6th, Ciara Sheppard 21st, Asia Clarke 23rd and Sarah Woods 25th. In the U15 Boys 3500m, the club claimed their second team bronze of the day with 65 points with 11 Sean Cotter, 17 Finbar McFadden, 18 Kyle Moorhead, 19 Liam Leen and 40 James Furey – a fine performance with several of the team running out of age.