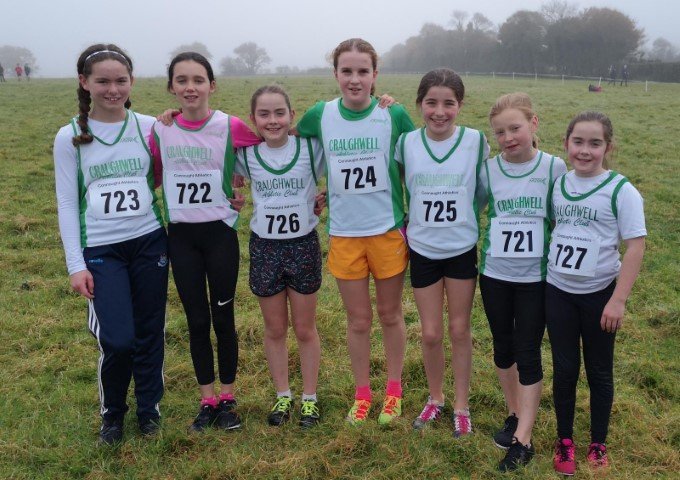 The venue was Calry, Sligo – a course with a reputation for mud, hills and more mud. With the heavy rain of late spirits were muted in the cars on the nearly 2 hour drive from Craughwell – however when we got out and walked the mist-covered course, we had a pleasent surprise.  The long drags were still there, but the course was runnable with only about 200m of the 1km lap that were really muddy.  Rumour has it the farmer had switched from Cattle to Sheep, and we were all grateful for it!  The course is set in a spectacular setting in Yeats country and as the mist burned off we were treated to some great views.  Each lap is just over 1km, and consists of a 500m drop followed by a 500m drag.  The finish in particular is a gut-churning 250m straight up a long drag, brilliant for spectators and we saw some superb battles.

Craughwell athletes featured in almost every race and the results were smashing as usual with every child giving their all and doing themselves proud.  Craughwell did brilliantly in all the age groups, with the highlights being a superb individual gold from Caron Ryan and a brilliant team Gold from the u12 boys.

[note: results aren’t released yet, let me know if there are errors or omissions, or if you know of some more results!]

Sisters in arms! – the u12 Bronze medal winning team

The u12 Girls 2000m kicked things off with a simply superb team effort to claim Bronze.  Aeveen Kelly, Emma O’Donovan, Keevagh Barry, Amelie Bocquet, Ciara O’Connor and Katelyn Walsh wore the green and white with pride and each had a big part to play in the result. 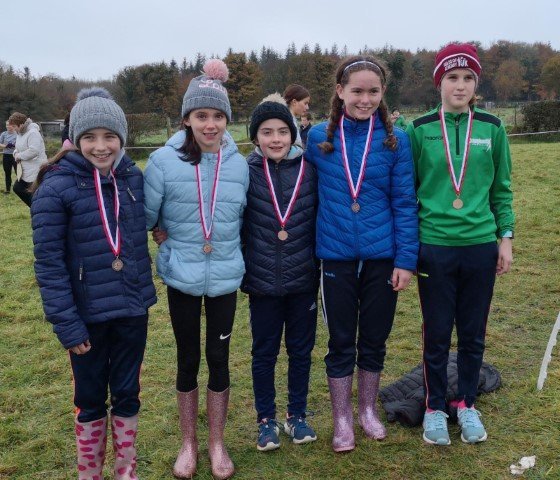 The u12 boys 2000m fared even better, with one of the runs of the day coming from Keelan Moorehead in their race, leading his teammates of Stephen Joyce (6th), Stephen Ruane (7th), Declan O’Connell (12th), Cian Brady,  and Jack Farrell to Gold.  With 3 finishers in the top 10 of a superb field, they always had a superb chance of winning.  Keelan was in Bronze position at the base of that long tough finish, but just got pipped to 4th at the end of the climb. 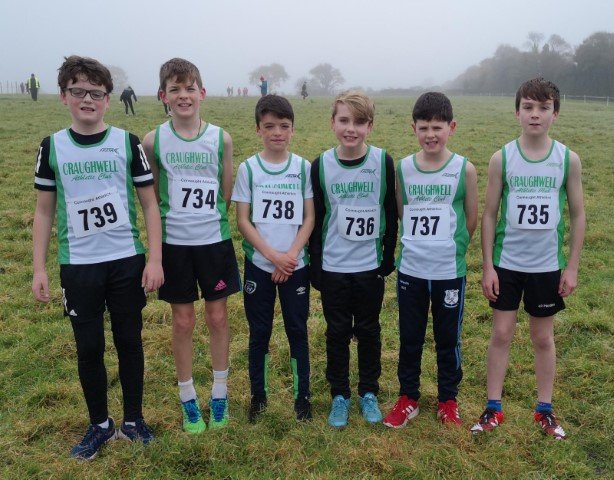 The u12 boys delighted after their superb performances!

Next up in the u14 boys 3000m race, Sean Liston and Mathys Bocquet donned the green and white for the 3km race. Mathys was my strong pre-race pick for the win as he has been training very consistently, but as they say “there is always someone!”.  In this case the entire field looked strong up front.  Mathys and another fine (Swinford?) athlete  moved clear after a lap.  They ran close to each other, with Mathys just a few steps behind for the first two laps.  With about 1000m to go, the lead athlete put on a surge and the gap stretched from three paces to about 10 and try as he might, Mathys couldn’t rein him in.  It was a superb race and no doubt these two will meet each other again in Abbotstown on the 24th!  Sean Liston finished strongly, running hard all the way. 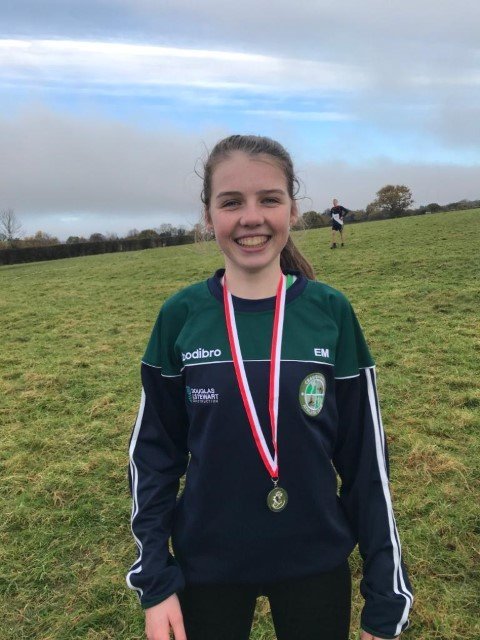 Emily rightly delighted with her Silver

The u16 girls 4000m was the next Craughwell race, and we had one competitor in Emily Miskella.  This was a fascinating race to watch – many of the competitors familiar with each other from the Connacht endurance squad and other events.  It started out so tactically with the entire field grouped together and feeling each other out for a lap.  After they had completed the first lap, the leaders added an injection of pace from the middle of the hill and the field soon spread out into several groups.  Emily watched all the moves carefully and put herself in a good position in the first three.  This group of three eventually pulled clear of the field and it was all about the colours of the medals for them from about 2.5k on.  About half way through the final lap, one girl put on an almighty surge and broke clear so Emily was left in a battle for Silver.  She won that battle in a real barnstormer of a run down the back straight, broken clear by the bottom of the hill finish.  It was a real “give it all” performance from Emily, and an absolutely brilliant performance to watch. 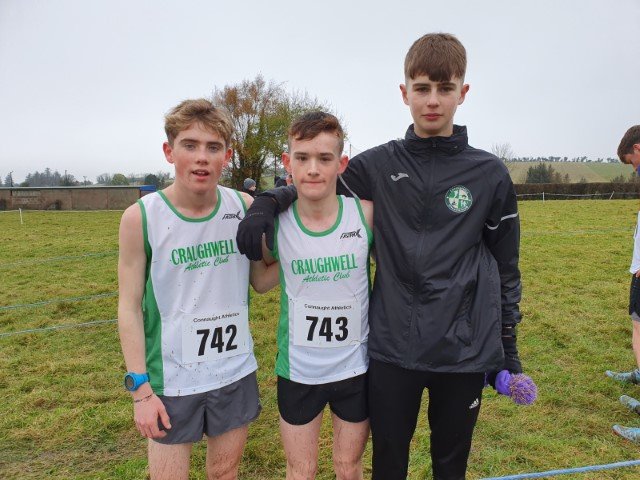 The boys putting the athlete into triathlete!

In the boys u16 4000m, Ross McGuinness and Anthony Boyle represented Craughwell in yet another stacked field.  This race started at a pheonomenal pace and the field soon got spread out.  Ross attached himself to the leading group of three and they broke clear of the chasing pack.  Ross looked comfortable with about 2km ran, but at this stage another surge happened and he found himself unable to respond on this occasion and a gap developed.  He held on bravely for an excellent 3rd place finish.  Anthony was running his first ever Cross Country and he totally blew all my expectations out of the water!  He ran an exceptionally smart race.  He didn’t get sucked into the early chaos, picking off runners all the way through his race.   At one stage he was in 6th position, but in the end I think he got 7th overall – an exceptional debut from Anthony! 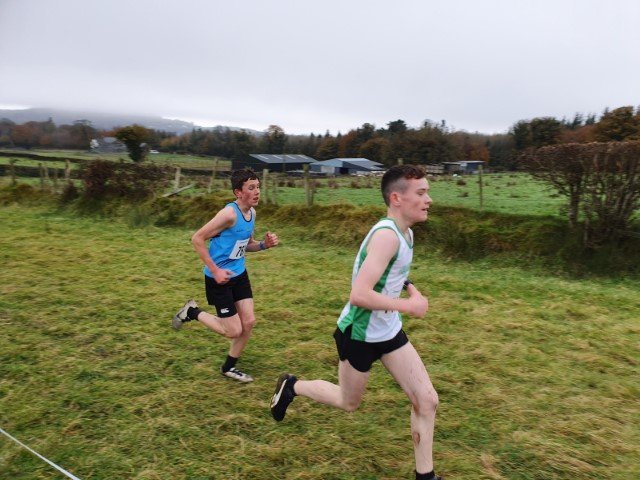 Emma Boyle was our sole competitor in the u18 girls 4000m race.  This race was exactly the kind I hate being in – it had a small field of about 10 athletes but everyone was good so there was nowhere to hide!  Emma was totally unphased and settled in over the first lap and found her rhythm.  In the end she came 4th which was a superb result.

In the boys u18/Junior 6000m race, the pace was ferocious!  Luke Burke was the only Craughwell competitor and he was running smartly in the early laps but unfortunately developed a pain in his foot so decided wisely to live to run another day. 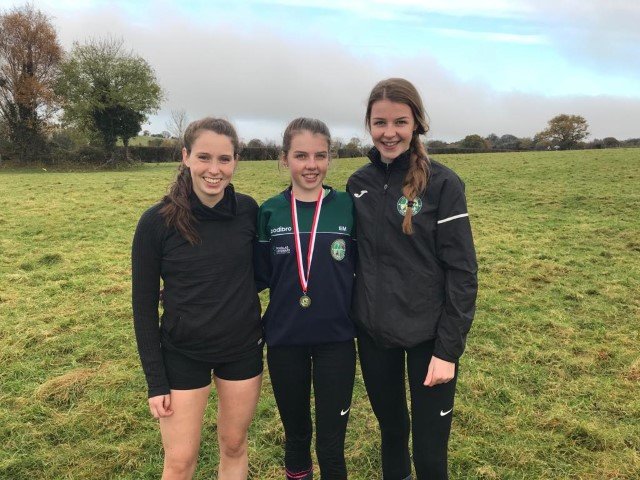 Sinead, Emily and Ailbhe who is itching to get back!

In the Senior Women’s 4000m race, Craughwell had two competitors – both on comebacks!  Caron Ryan hadn’t raced all year and was itching to get her spikes on again.  Sinead Gaffney has been racing but this was her first competive Cross Country in many years.  Caron made a triumphant return with a superb solo run up front from the gun to claim a marvellous first position.  Sinead got carried away a little in the first Kilometer but ran a superb run and won’t find a tougher course than that to test her!  Welcome back to both ladies! 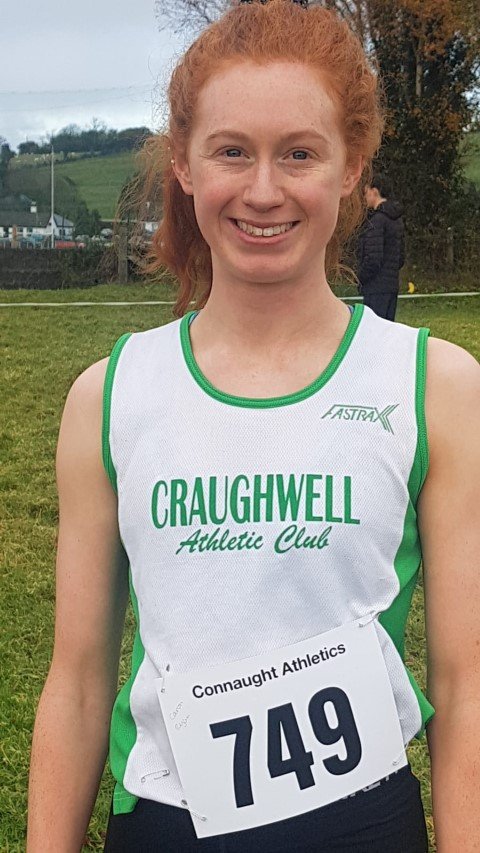 Last race of the day was the Senior men’s 8000m race with quite a large field of 40 or 50 athletes from all over the province.  Craughwell fielded a strong team of Kevin Mooney, Jack Miskella, Gavin Cooney and Mark Davis.  The longer slogs can sometimes suit the old dogs and so it transpired on this occasion as I managed to work my way through the field until I ended up in a nice see-saw battle with a Moy Valley lad.  I had a good night’s sleep and felt fresh enough to push for home early and was pretty surprised and happy with taking 3rd – a good boost two weeks out from the 5-nations in Aintree.  Next home for Craughwell was Jack in about 6th or 7th, followed by Gavin in 11th and the carefully building Kevin not far behind.   Exceptional running from all and results not out yet but I think Craughwell were most likely first club on the day. 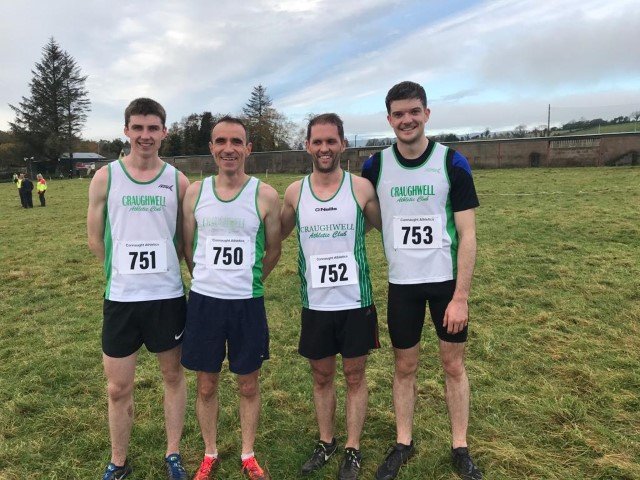 All laughs – I’d say we were first team?