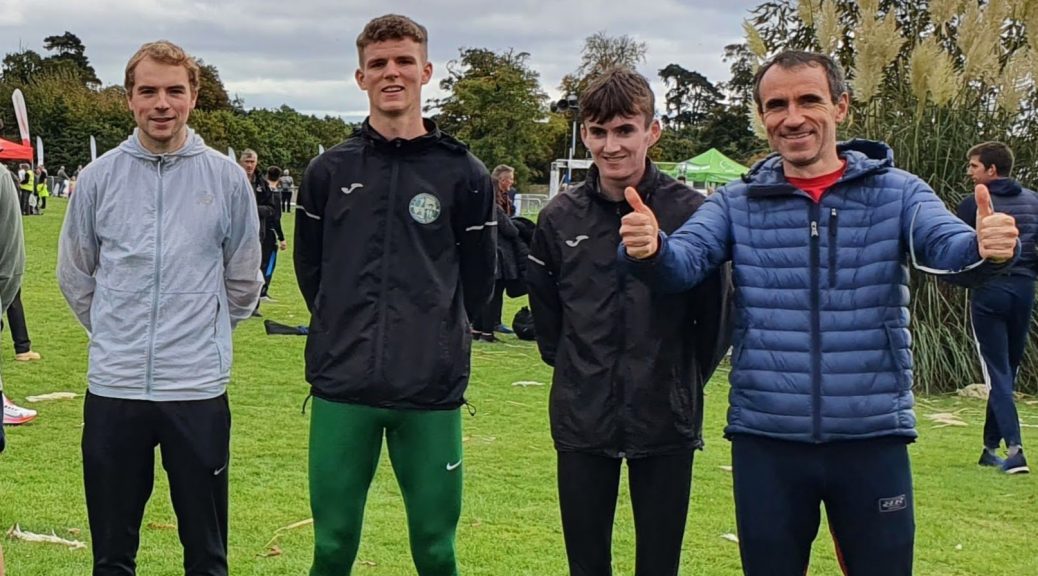 David Matthews, legendary Irish 800m runner did a lap of the course the other day on Instagram and called it tough and muddy. Turns out, the speedy track man’s definition of “muddy” doesn’t match your average Connacht person as the course was immaculate throughout and I’ve never seen the back section as clean.

The National Cross Country course in Abbotstown is my favourite course and plays host to the Eurocross later this year.

The big lap is a 1.5km loop, which the Senior men ran 5 times and the Women/Junior men 4. It starts downhill with a sweeping fast open first kilometer – a fabulous cavalry charge which causes many to get carried away with themselves. Next you turn into the sheltered section where you begin a series of rolling ascents for approximately 400m, after a relatively level 300m, you do it all again!.

When you have completed your allotted number of laps you face the biggest challenge of all – you round the corner to see the finish line, seemingly within touching distance and kick for all you are worth!! However, time and distance get warped somehow here and you eventually will realise the actual finish line is just a mirage that only gets further away while lactate quick-sand sucks you back and treacle-veined competitors you just outkicked wade their way back to you in some kind of slow motion torture – glorious stuff!!

A nice contingent of Craughwell Athletes headed up – Jamie Fallon, Caron Ryan, Kyle Moorhead, Jack Miskella and William Fitzgerald made the hike to the national cross country arena in Abbotstown.

In the Senior men’s 7.5km, William Fitzgerald showed more of the scintillating form he has shown all year. Jamie led the Craughwell challengers through the first two laps. William started quickly but still more cautiously than most of the field, many of whom lived to regret carrying the exuberance of their opening km through the first hill. Well warned, Jack sat well back from the mayhem in the early stages which I took as a good sign!

As the laps rolled by, William gained on Jamie and, after a period of working together gradually built up a narrow gap. William made a massive effort down the long finishing home straight, kicking impressively to overhaul several – but he got re-taken by two of them just before the unreachable finish-line. A marvellous 12th place finish in 24.21! Jamie also made a great push on the long home straight, just getting hauled back by Sligo AC’s Finley Daly at the death for a superb 19th place – two in the top-20 is a definite record in the event for Craughwell! Jack was next home in 40th position – having made up huge ground over the last 3 laps for a super run.

With Sean and Oisin out sick, Kyle Moorhead was the sole Craughwell Junior in the race and though the 800/1500m man had a solid run to finish 26th, there is definitely much more to come from the NUIG Student.

In the Senior women’s race, Caron didn’t quite look 100% from the start and she had to pull out after a km or two – thankfully not an injury – she will hopefully soon be back stronger than ever!

All in all a brilliant day and well done to all the athletes that took part – it was great to see such superb results from all the Galway and NUIG athletes. Thomas McStay in particular had a breakthrough performance to win 3rd in an inspirational outing. At one stage it looked like he was getting dropped by the lead group but his fight back was hugely impressive and he was only one second off Silver in the end (that’s one second behind many people’s pre-race favourite, Tom Mortimer – a UK 7.38 3000m runner!), having closed the gap from 11 seconds over the last 1500m!. Kudos also to Athenry ACs Martin Keane and GCH’s Gerry Carty who look likely to win selection to the Irish masters team for the friendly against Northern Ireland in November.

Next stop for Cross Country – the Connacht Evens in two weeks, followed by the UnEvens and then a week’s respite before the big one: the national cross country championships!