On another night of high drama at the AIT International Grand Prix, Canadian pole vaulter Shawn Barber was the star of the show when soaring over 5.77m on his first attempt in the packed Athlone arena – in the process setting a new National Allcomers record, the previous record being 5.40m.

The Canadian quickly became an adopted Connacht man as he demonstrated his greatness when hanging back patiently after the event for the scores of kids who wanted autographs and selfies. In a similar manner to the great David Rudisha a few years ago in Dangan, the young Canadian star was a great example of humility and gentleness as he calmly spent over 30 minutes with his young fans.

It was another splendid program of events with another highlight being the wonderful mile record set by Ethiopian athlete Dawit Wolde in a time of 3:54.02. That’s faster than eight 30 second 200s in a row! Incredible running.

Earlier in the night, Craughwell AC’s young relay teams put in a heroic effort in the invitational 4x200m relays. The U13 girls team were blazing to a magnificent victory when disaster hit Emily Miskella only metres from the line.

Holding a substantial lead of over 30m, Emily was literally flying when her feet were moving so fast that she tripped around 10m from the line and only that the baton went rolling 4 or 5m into the next lane, Emily would have recovered and still won.

As it happened, she bravely got to her feet and finished 4th – but certainly the unofficial winners of the night along with her team of Eve Ayo, Rebekah Flynn, Aoibhe Carr and sub Jade Moorhead.

The U13 boys had a less dramatic finish to their race when taking 3rd place with a fine performance from the team of Robert Urquhart, Danny Morrissey, Lukas Schukat and Conor Hoade (sub Cian Lavan).

Full results of the night are here. 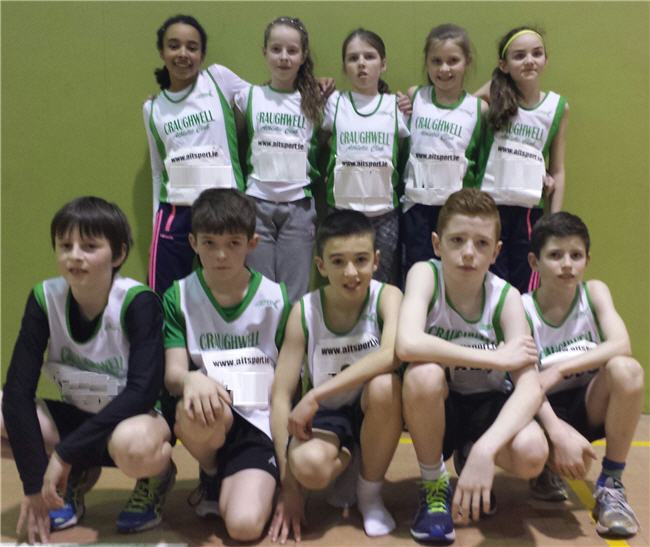