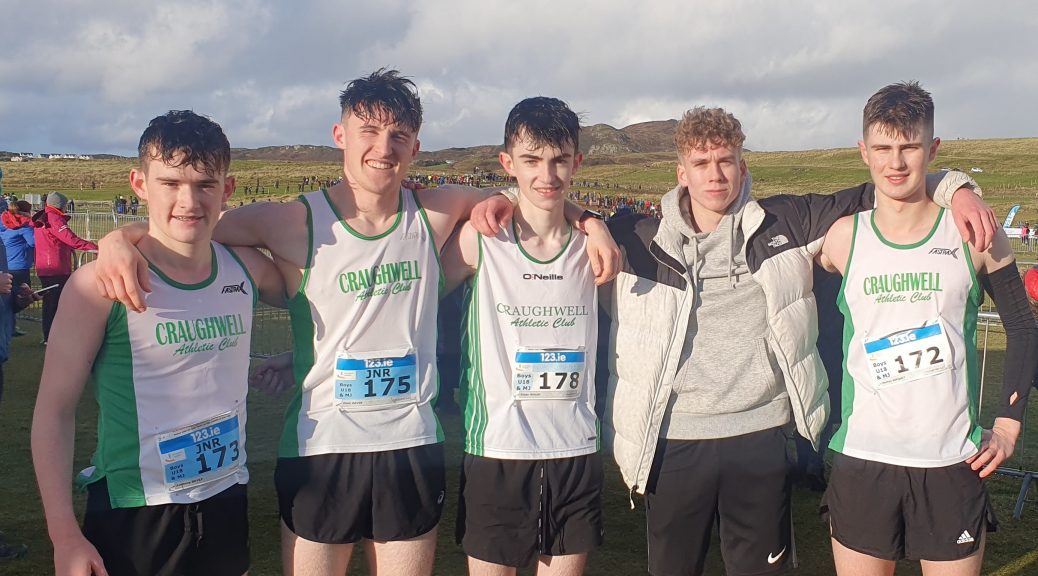 This year’s National Senior and Even Ages Cross Country Championship unusually took place in the remote and beautiful Downings peninsula, Donegal.  A large contingent of Craughwell AC athletes made the lengthy trek and delivered amazing performances.  The weather was cold but mostly dry and the course was an excellent, undulating cross country course with plenty of technical hills and turns – very little mud but still enough to take shoes from top contenders in all races.

For those unable to travel, the live coverage of the races was exceptional on the stream and take a look at the below stream to fast-forward to your desired race:

The Craughwell AC Senior run of the day came from William Fitzgerald who came 28th in the Senior race and 9th u23.  William covered the tough 10km course in a fantastic 31:46.  Looking at the criteria for the International CrossCup Hannut in Belgium in January, I think this puts William in an automatic selection spot for his first international cap which would be an outstanding achievement, fingers crossed he gets the opportunity he’s earned!.

Second home for Craughwell was Jamie Fallon in 52nd.  Jamie didn’t quite feel himself from the gun but covered the first few km with William before gutting it out for a solid run.  Third home was Jack Miskella in 80th in by far his best ever Cross Country outing.  Jack clocked an 8 km personal best en-route to a 33:40 finishing time.  Patrick Noonan, running his first 10km, went out a shade too hard and felt it bite from 3 km in.   Patrick held on well for an 87th place finish in a little under 34 minutes.  I was 5th home for Craughwell in 129th place overall from the 180-odd finishers, not my finest run as I wasn’t really in the mood for it after the drama of the youngsters races but I muddled through all the same.

When I heard the 10km race consisted of 7 laps, I knew I was in imminent danger of getting lapped in an XC for the first time in my life and it duly happened as the leaders passed me just as they made their final surge for home when Hiko was trying in vain to break Darragh. The first 8 finishers passed me like I was standing still, it’s stunning to see it up close and personal. My landmark first lapping wasn’t exactly under the radar as the clip featured in a lot of the news broadcasts and media re-tweets! I did lap a good few myself which is little consolation – I’m officially old now!!

The Junior Men’s 6km race was a qualifier for the prestigious European Cross Country U20 team, with the top-3 being guaranteed qualification and up to 6 places awarded from the race.  Seán Cotter had put his heart and soul into training for this almost impossible goal over the last 6 months.  The popular Oranmore man had the race of his life.

Seán immediately put himself right at the head of the 180-strong field along with World and European caliber athletes like Nick Griggs, Dean Casey, Scott Fagan, Cathal O’Reilly, Sean McGinley and others.  Many coaches agreed that this was possibly the most stacked ever field for the qualifier, but Sean looked right at home. As they turned for the last km, Sean was still looking strong in 4th place and we all were starting to believe in the unthinkable.

At this point however, his legs inexplicably just completely went from him and he couldn’t run another step – he completely hit his limit.  Seán was fine after some treatment – understandably gutted, but his coaches, teammates and family couldn’t have been prouder of him for his immense effort and bravery and he was left with no regrets from the day or his preparation.  His was definitely the run of the day for me – he put himself right where he wanted to be and stayed there as long as humanly possible.

First finisher for Craughwell in another fine run was Oisín Davis as 16th Junior overall in 19:02, about 34s from a Eurocross qualifying spot.  Oisín went out a little hard, just behind the leading group but consolidated to balance his energy well over the remainder of the course to finish ahead of many of the nations top XC specialists.  Mathys Bocquet who has 3 more years in the category was next home in 48th, and 4th u17 in the race which should give him good encouragement for the u17 nationals in two weeks.  Anthony Boyle, Liam O’Connell and Killian Walsh finished in 143, 148 and 150th positions respectively in fine runs for all three, despite not being quite at full fitness and having more years to run in the category.

In the u16 boys race, the talented Declan O’Connell was once again the star of the show with an exceptional 6th place finish to scope a top-12 medal, out of age and I think the first u15 home.  Declan ran a perfect tactical race from start to finish, just sitting back from the lead group of an excellent race that was iconically won by the athlete from the local Cranford AC club. Declan was followed by fellow u15 Stephen Ruane showing great strength in an impressive 48th place.

The exceptional Stephen Joyce delivered one of the runs of the day in the U14 boys race to finish 14th overall.  Stephen had a bug leading up to it but didn’t let that bother him with a superbly strong start and holding on all the way for his memorable result.  U14 Claudia Coyle prefers the track but took on the 3k course in Donegal regardless and did fantastically with a 66th place finish.  Claudia used her track speed to get out good and strong and held on well over the narrow sections of the course for an excellent finishing position.

Donal Coyle led the Craughwell charge in the u12 boys race with a superb 46th place finish.  Donal was closely followed by Sean Colleran in 72nd place.

In the u12 race, Sophie Meehan came a fantastic 68th over the 2km loops.  The start of the race sweeps into a narrow bend and with the traffic Sophie found it difficult to make as much progress as she would like over the short course.  It was a great experience and she did get a slot on RTE news for her run!