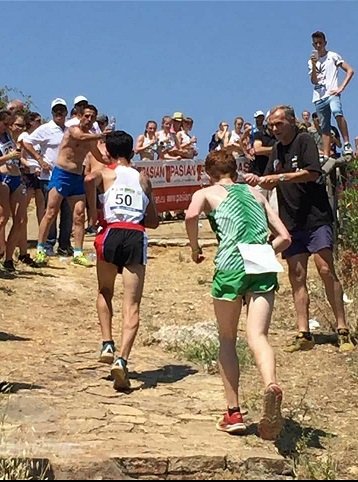 We all thought it was hot in Santry on Saturday, but by 10.00am in the Italian mountains, temperatures had soared to 34°C! Even sitting in temperatures this hot; is exhausting, one can only imagine the affects on the body when you have to run a 5k distance and run a significant part of it, uphill.

According to Ben (Ryan), it was an incredibly fast start to this race, with the first 200m covered in 30 secs; which you can liken to a 2 minute 800m pace. After the first lap Ben held a very strong comfortable position somewhere in the middle of the pack. Embarking on the second lap, he decided to give it his all and charge forward, overtaking several runners which left him at the end of the 2nd lap amongst the top 20 runners. This was a remarkable achievement demonstrating Ben’s strength of character and motivation to ignore the feelings of fatigue attributable to the extreme temperatures. Unfortunately although the risk paid off, in him gaining signifcant places, it also meant that it led to him missing out on an all important water station and necessary hydration stop. The combination of the heat and dehydration resulted in Ben collapsing with a mere 1500m to go.

Speaking to his family after the race, they recounted how devastated Ben was not to have been able to finish the race, with such a short distance to go. Shortly after the race he indicated that he would “never” run in that heat again.

It was only later on that day speaking from the hotel Jacuzzi that Ben was able to reflect on the fantastic experiences he had gained and the benefits of such experiences going forward. He is now looking forward to the possibility of representing his country again.

I am always amazed at how effortless our long distance runners make their races look and to add to the equation of long distances (in this instance) were steep hills and extraordinarily high temperatures. A fantastic achievement Ben. Well done.

From Ben; “I’d like to thank Craughwell AC for their continued support”.
Comments are closed.