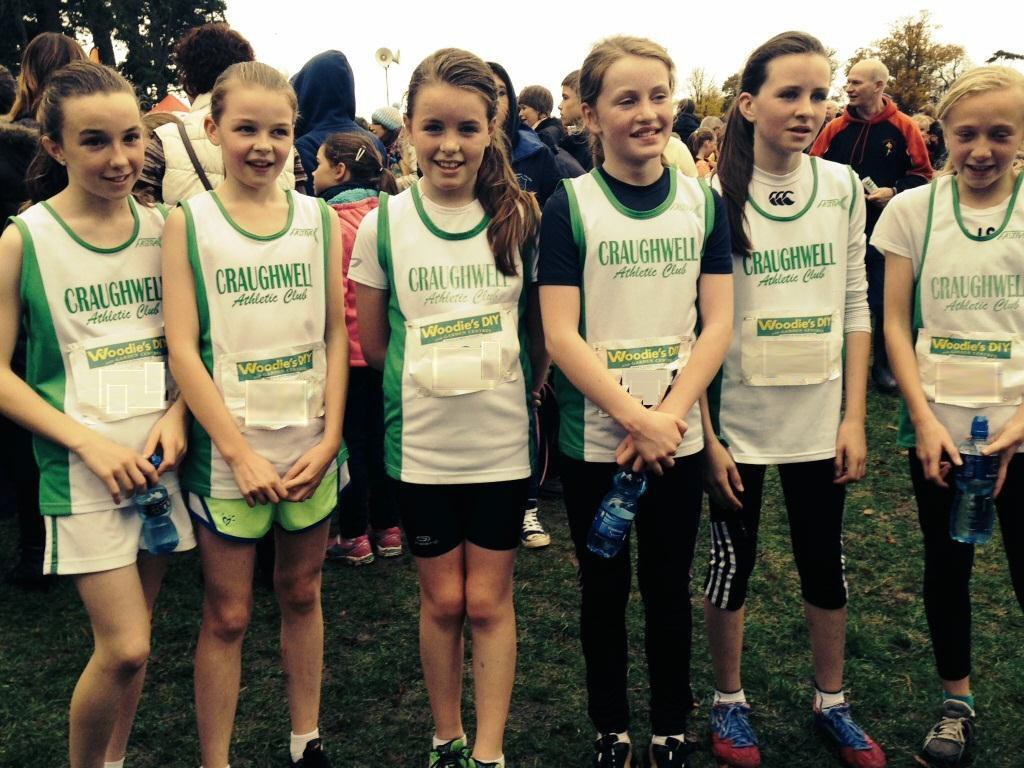 The club travelled in numbers to the National Even Ages cross country in Santry on Sunday where as usual an incredibly high standard of running greeted us. Some of our teams were running for experience while some were in serious contention for National honours.

Jamie Fallon had a superb run when stepping up an age in the U18 boys grade, taking individual 5th place and placing perhaps 15th overall in the combined U18/20 6000m race – a result that certainly bodes very well for Jamie’s chances of making the European Junior Cross Country team in the years ahead. Jamie’s progress in distance running and cross country has been memorizing with a steady improvement year by year from his 52nd position as an U11 in 2007 in his own age group to his 5th place at the weekend out of his age and he is an inspiration to many younger and older runners in the club.

Also having a superb race, Oisin Lyons had a magnificent performance in the U14 boys 3000m. In spite of missing the last 2 weeks of training due to an ankle injury, an injury which was aggravated during the race by a stumble on a short concrete section, Oisin make progress through the field to hold 7th place by the half-way stage and held onto this place to the finish for one of the club’s best ever individual performances with only a handful of athletes from the club having ever finished at this position or higher – Jamie Fallon (5th U18 this year and 6th U16 last year), Conor Gillen (6th U14 in 2009, Linda Porter (4th U11 in 2004), Ashley McDonnell (7th U11 in 2003) and Rachel Finnegan (6th U11 in 2002).

The day kicked off with a massive performance by the U12 girls in their 2000m to take 4th place in the club event only a mere 9 points behind Donegal’s Finn Valley AC. Niamh Niland led the team home in 21st place with Ailbhe Miskella 38th, Jennifer Hughes 48th, Sarah McCartin 87th, Mia Waters 125th and Sarah Woods 126th for an exceptional team performance. Both Niamh and Ailbhe scored on the Connacht team that took the bronze medals. You have to go all the way back to 2004 when the club had a similar performance in this age group with a 4th place finish with Sarah Helebert 16th, Ashley McDonnell 31st, Laura Mitchell 51st, Linda Porter 76th and Kate Bryan 141st. This year’s U12s are in fine company with athletes of the above caliber with Kate going on to represent Ireland in international volleyball, Laura getting the Irish camogie player of the year award as an U18, Linda winning county camogie honours with Galway and Ashley winning multiple 600m National titles in athletics, not to mention Sarah daughter of hurling legend Tom Helebert who probably could have achieved all of the above barring injury.

The U12 boys were also in fine form with Sean Cannon in particular having an outstanding finish to take 20th place individually and lead the team to 13th place overall with David Lee 57th, Finbar McFadden 92nd, Kyle Moorhead 144th and Shaun Gilligan 145th. Well done to Shaun who made the big step up in age from U11s for this race and to Kyle who was visibly suffering from a virus but still participated. His finish position in no way reflected his ability having took bronze in the Galway schools cross country only a few days earlier. 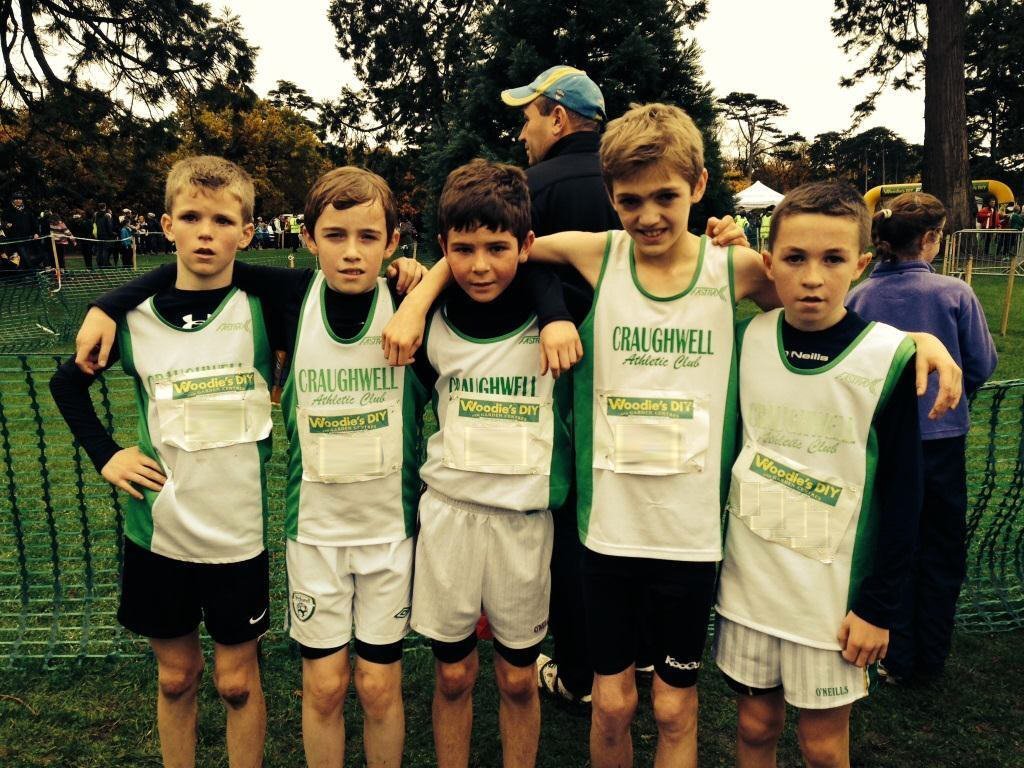 The U14 girls’ team bravely lined out for their 3000m. The girls knew in advance that they were running mainly for experience as most had not participated at this level before. They all ran well against the best in the country and with more experience will be well able for this level of competition. The team placed 14th led home by Rachael Hughes in 89th followed by Amy Touhy 132nd, Catherine Noonan 137th, Sineád Kennedy 143rd, Sarah Phillips 144th and Fiona Commins 145th.

As mentioned earlier, the U14 boys were led by a fantastic performance by Oisin Lyons in 7th place. Conor Lee put in a fine performance also when taking 49th place. Conor was making a return to cross country after a year’s absence and there is plenty more to come hopefully in the years ahead for Conor. Patrick Noonan stepped up an age to take 77th place, a fine run and a huge improvement on his 90th place finish in the U12s last year as did sibling Sean who placed 136th in the older age group compared with 133rd in his own age group last year. There were also fine runs from Luke Finn 134th, Jerry Durkan 142nd and Gavin Forde 143rd in their first season of cross country. All 3 athletes are making steady progress and the race was super experience for them. 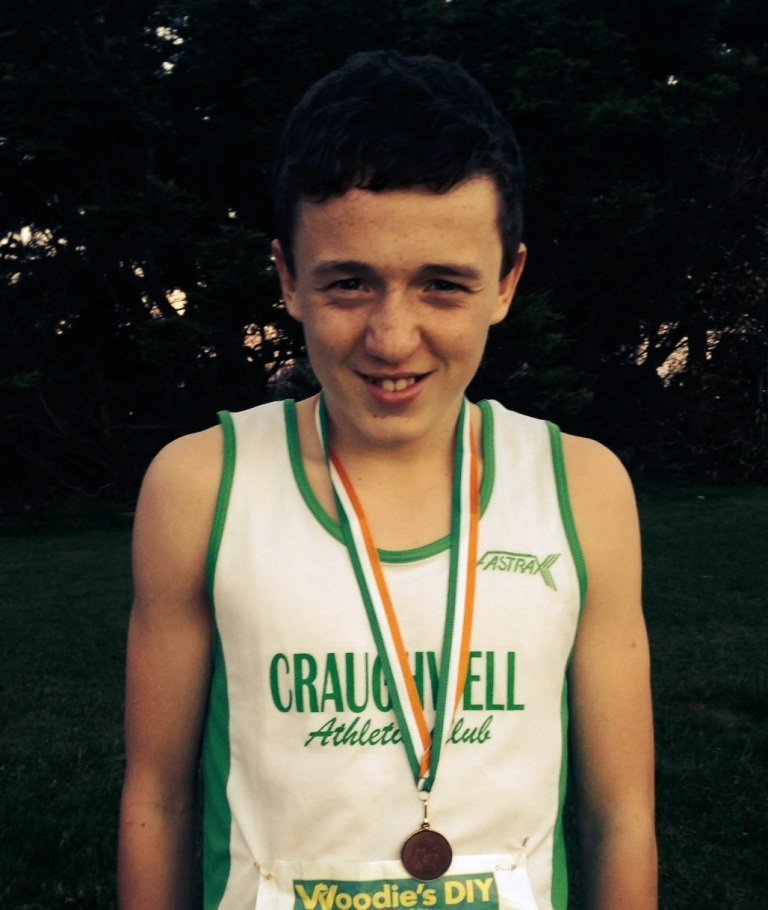 Oisin Lyons, 7th place in the National U14 Cross Country Championships in Santry

The club fielded an U16 girls’ team for the first time ever in the National cross country championships and they all performed admirably. In a high quality race, Grainne McDaid led the team home with a 70th place finish followed closely by teammate Dearbhaile Walshe in 73rd with Ciara O’Boyle 91st and Laura Keane 115th. For both Grainne and Dearbhaile, it was great to see them getting back into strong racing form and we will see plenty more from both athletes in the next year, while for Ciara she had her best run ever in cross country and can be very pleased with her finishing position. It was Laura’s first cross country season and a baptism of fire to compete out of her age in the National championships. With what sounded like an elbow in the ribs very early in the race leaving her winded, Laura did exceptionally well to finish out the race over its tough 4000m distance and like the other girls, Laura shows plenty of promise for the future. The team placed 11th overall and the club are very proud of their achievement in contesting at National level.

The U16 boys had a tough battle in their 4000m race. Liam Moran and Oisin Doyle were well placed in the early third of the race but a bad stumble and minor injury put paid to Liam’s chances of a top finish and he drifted back in the group. Likewise as the race progressed, Oisin drifted back a little and found it hard to get going properly on the day. The team placed 14th with Liam leading in 75th place followed by Oisin 89th, James 96th, Matthew 122nd, Diarmuid 135th and Ben 136th. With most of the team U15, they will get another crack at it in 4 weeks’ time and the experience from the weekend will stand to them. 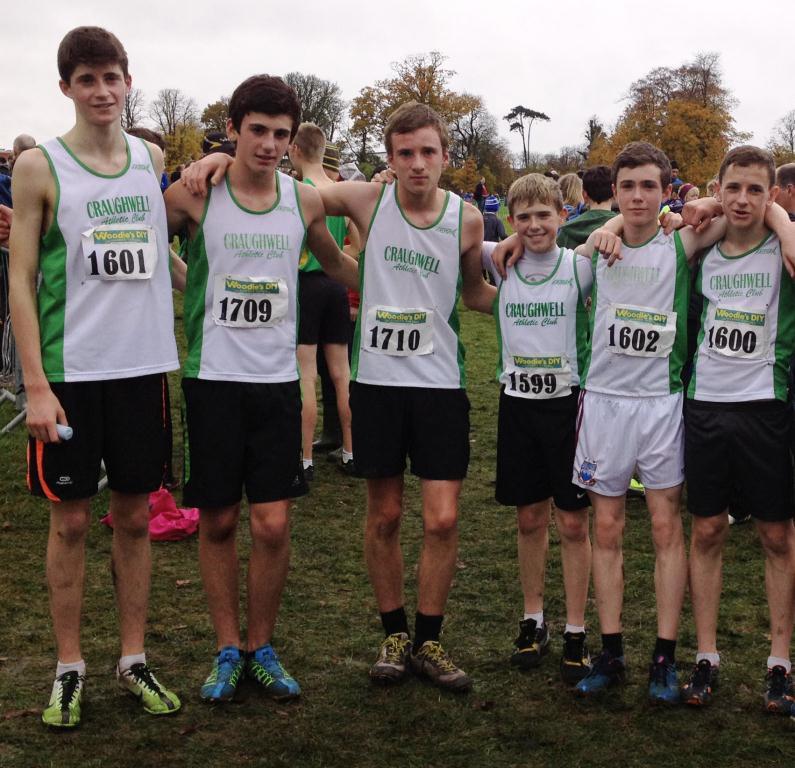 The U18 boys, bronze medalists from last year, hadn’t a great lead-in to this race with injuries to John Cormican and Keelan Ryan in the Galway championships ruling them out of today and with Nicholas Sheehan’s exile (!) to Yeats College for his Leaving Cert year. As already mentioned a fine individual performance by Jamie Fallon to take 5th place put the team in with a chance. But an unfortunate injury to our 2nd placed athlete Matthew Moran during the race cost him 10 or more places. Matthew was having his finest cross country season to date and was certainly in form for a top 20 or higher finish, so it was very unlucky to pick up an injury during the race. But it’s a measure of the man’s toughness that he persisted and finished 35th and was literally unable to walk after the race and the following day. Conor Gillen who is returning from injury was perhaps 4 or 5 places behind Matthew as the race entered its closing stages but had to pull out. Damien O’Boyle whose focus had switched to multi-events for the autumn was our final runner in 63rd place – impressive considering he had an extended break after a long track season and had competed in the schools multi-events a day earlier. We likely would have placed 5th team by a couple of points on the day and with a little more planning, could easily have taken team medals.

The U20 men’s race was combined with the U18 boys and we had two U19s take part in it – Neil Greaney and Paul Joyce both had fine performances when placing 18th and 19th in the U20 grade and perhaps 28/29 in the overall field. It was the best ever placing for both men and again plenty of encouragement for the future of Craughwell and Galway running. An interesting statistic is that by virtue of their finishing positions yesterday Jamie, Neil and Paul are the 4th, 5th and 6th best juniors to emerge from Galway in the last 16 years, a list that is headed by Irish international Gary Thornton back in 1998. And to think for Paul that had he not partied all night long at a grad the night before and arrived just 15 minutes before race start, that he still achieved such a fantastic performance – that’s talent! Not that I am recommending it as the best preparation for a race –  it was just unavoidable on this particular weekend!

Full results are on the Athletics Ireland website:- http://www.athleticsireland.ie/content/?p=35334