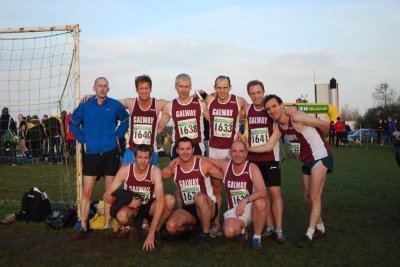 Obviously as shown below the Juvenille events had more than their fair share of hiccups.  However at the same time Galway managed to get a senior team up to the event, blissfully unaware of the hooha surrounding our juvenille athletes all day.  The Galway team was very Craughwell heavy with us making up 6 of the 9 athletes.  Credit to Peter for nagging us all into submission so that we made the effort.  The team was completed by Brian of Athenry, and Brendan and Eddie of GCH.

The Galway team all ran well.  I think the standard was a little higher than recent years (loads of tough northerners).  The Galway scorers were the ever-awesome Martin Corcoran of Craughwell (31) closely followed  by improver of the year (millenium??)  Peter O'Sullivan in 44th position, Johnny Lane (78) came next followed by Brian Bruton (86), Mark Davis (88) and Tony Nevin (103).  There were strong runs also from Eddie Costello, Brendan Glynn and Diarmuid Quill.  The standard is high in the novices and we all had a goal of not being last and we all achieved that goal!!

The start was dodgy in that there were no chutes but after all the negative talk of the Coleraine even recently I might as well just add in a few positive notes to give credit where it's due:

– The course was  in my mind the best cross country course I have ever ran on.  It was epic – 3 x 2K laps up long dragging hills, good ground, terrible ground, down steep declines into woods, sharp turns and to cap it off a gigantic whooshing windmill.  Now I know the above things might not appeal to juvenilles but they do to the masochistic adult cross country runner.

– The facilities were superb – dozens of hot showers right beside the course, a canteen, etc.

Aftewards we turned around and headed back on the 5 hour drive to Galway, stopping for a bite in a very nice steakhouse resturaunt in Ballybofey.  All in all a great day.  Well done to all those that made such a big effort to take part.