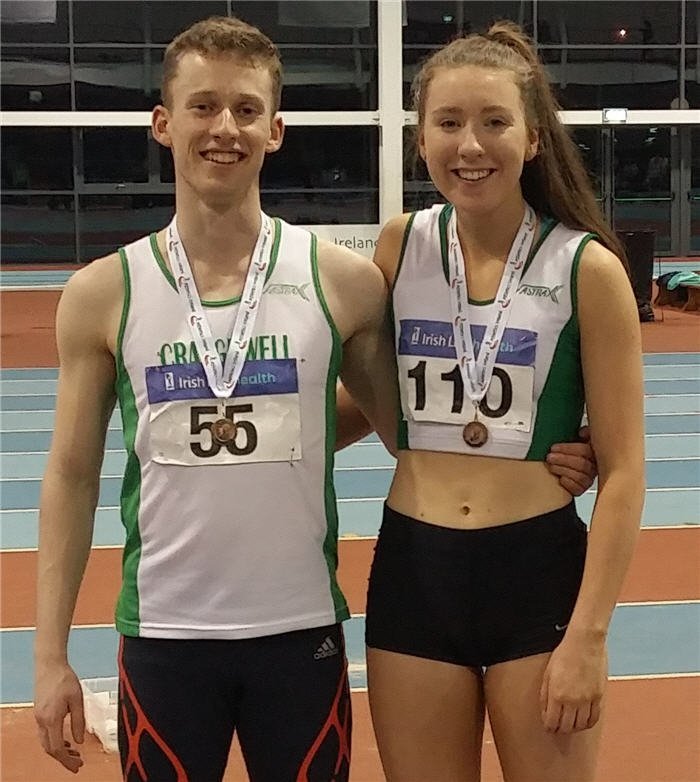 Sunday’s National U20/23 Championships continued a busy weekend for the club and particularly Sinéad Treacy and Laura Cunningham who had also competed a day earlier in the National League.

Jerry Keary completed the medal winning performances with a fine 1.90m clearance to take silver in the U20 men’s high jump – tying on the same height with the winner but having to settle for silver on this occasion. It was a great performance from Jerry who was ill on the day and also had to take a 10-day break from training recently due to a minor back injury.

Laura jumped brilliantly in the U20 Women’s high jump clearing 1.45m and 1.50m at her ease and brushing 1.55m on her first attempt before clearing it comfortably on her second attempt. She made 3 valiant attempts at 1.60m just clipping it with her heels on her 2nd attempt and having to settle for 4th place on this occasion on countback. She followed it up later in the day with a great series of jumps in the U20 triple jump and a best of 10.18m to place 8th overall and only for the busy 2 days of competition would have gone further – very promising for her own U19 age group in 6 weeks’ time.

Both Ben Garrard and Jack Miskella were unlucky not to make the finals of the U20 and U23 Men’s 800m when both finished within milliseconds of the qualification times in their semifinals with Ben recording a time of 2:04.27 and Jack a PB of 2:04.62. Ben was angling for a place in the final but unfortunately got boxed in on the inside lane for much of the race so when the break came for the last 200m, he was unable to maneuver into an outer lane to get himself into position to qualify and had to settle for fifth place and a time that was incidentally faster than all of the times from the second heat.

For Jack, this was his first time competing in a National track event and he set out with his own race plan in mind to run a PB and came within less than a second of qualification. Drifting back off his opponents in the first lap, Jack ran a brilliant race in equal 200m splits to overtake some of his opponents on the 3rd lap and move into a qualification slot on the final lap but just got pipped on the line in a busy finish which relegated him to 5th place – a fantastic performance on his first time competing at this level.