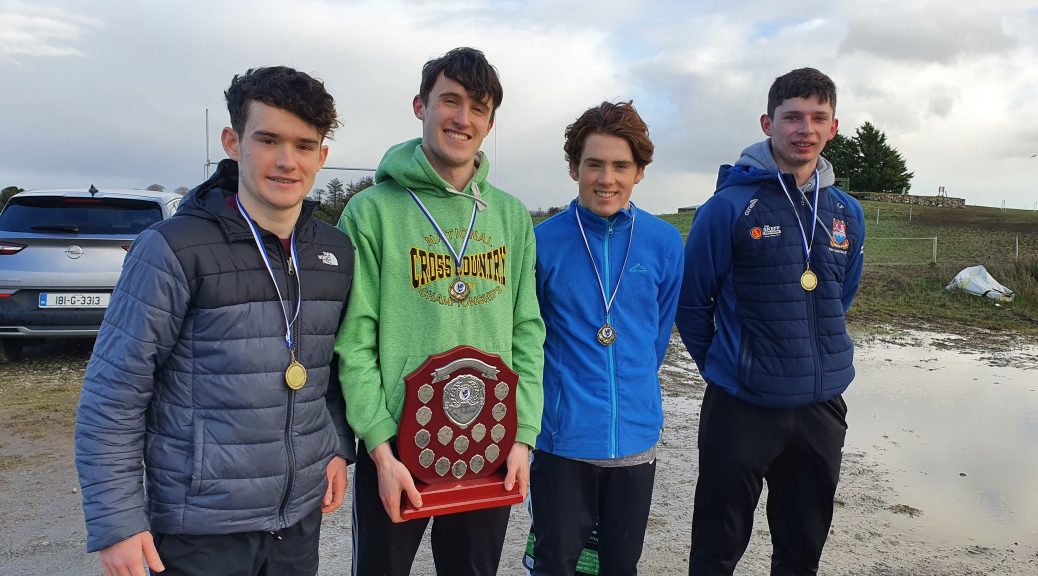 It was definitely a case of “four seasons in one day” as the cream of North and South Connacht distance running collided today in Bushfield for the magical goal of a top-15 qualification ticket to the All-Ireland in Belfast. After the heavy rain of the last few days, the course was coated with pretty deep mud for a lot of the loop, and the weather was intermittently cold and sunny and freezing and stormy. There were some outstanding runs from Craughwell AC Athletes. I’ll start from oldest to youngest which is the reverse of the order they ran in. [I don’t have the official results yet and don’t know all the athletes so if there are Craughwell Athletes you know of that ran but I don’t mention, just let me know and I’ll add them to the report – we like to have everyone in the reports for historical record!!]

Oisín Davis tends to travel fairly well over muck and it proved the case today as he made a move with just 500m covered and sealed a comfortable win, extending his lead all the way.

Ross McGuinness got “the jab” during the week and it knocked him for six, but he shook that off and closed with an outstanding last km to seal 5th, fighting off a fast finishing opponent with an unbelievable response-kick which is a really hard thing to do!. Next home for Craughwell AC was Anthony Boyle in 10th place, followed by Luke Forde in 13th place. Both lads found the conditions tough going but had very strong runs. The scores were enough to seal a fine win in the School Teams Competition and the new Plaque is winging its way to the Pres tomorrow!

Senior Girls: Emily to the fore

Leaving Cert Student Emily Miskella represented the Pres Athenry with pride to compete in a small but very high quality girls race. The race started out slowly but soon wound up with Emily leading a breakaway group of 6, ably accompanied by her training partner Helena.

At about half way, Emily got tailed off slightly from the group and made a valiant effort to close the gap , which she did, but as soon as she closed the gap the group surged again and she got dropped slightly back to finish in a fine 6th position. Her training partner Helena O’Keeffe continues to show good form this year, with a real breakthrough run to finish in 3rd.

The Intermediate Boys race was the pick of the day – definitely the highest quality field with an exceptional group of Summerhill athletes working as a pack and several national medallists in the top 10. It started out slow but wound up fiercely.

Mathys Bocquet representing Calasanctius found the constant muck heavy going but stuck right in there in the lead group despite several slips. In the end he finished a fine 4th as the talented young Spanish visiting athlete Arturo kicked at a rate of knots for home, ambushing all the top 6. There was very little to separate the top-6 so it was one of the best contested Connacht cross races in a long time.

Teak-tough Oliver Ginty absolutely emptied the tank on the finishing straight and closed for an exceptional 12th and a qualification for the nationals in Belfast. Liam O’Connell also representing Clarin College was just outside the selection slots, in 18th position – a fantastic result from a man just starting to take it seriously. Sean Doggett of Athenry that sometimes trains with the gang in Craughwell was very unlucky to finish in 16th – just outside the qualifying positions.

Holly O’Boyle was in 17th position for the first km but when the initial injection of pace happened she slipped slightly back to about 24th, a position she held for the remainder of the race.

Declan O’Connell put on another masterclass in the Junior boys race with a dominant win from the front. There really isn’t a whole lot more to say about this race other than that it reinforced his class, which is no surprise to anyone that watched his dominant win in the nationals last year – he is just brilliant!

Junior Girls: Emma and Brigids off to Belfast!

Emma O’ Donovan had a storming run for Scoil Naoimh Bríde Loughrea, driving home in 17th place to help her School Team of St. Brigids qualify for the all-Ireland in Mallusk as first team. Emma was helped by teammates Eva Ruane3 (2nd) and Clodagh Breheny (28) and Bethany Clancy (46).

Stevie Ruane got the day off to an outstanding start with the first of the three Craughwell AC wins. The “hitman” looked absolutely superb, driving to the front and running an absolutely class race from start to finish. He had a gap on the field, but not a large enough one that you could ease off so he had to keep his concentration work right to the line, finishing with an absolutely empty tank. Fair dues Stephen!

Minor Girls: Amelie off to Belfast!

After her great run in the South Connachts, Amelie Bocquet set herself the ambitious target of qualifying for the all-Irelands in Belfast on 12th of March. A top-15 finish is not easy, especially at the younger ages where the depth of competition tends to be greater. At about half way, she was running in 15th position and her mum elaine knew jusat the thing to motivate her: “You are 17th Amelie!!” she shouted, and you would want to see Amelie move from there! She drove on to finish in an excellent 13th – job done and a brilliant achievement for her. I think she was probably the happiest runner there, and rightly so!

Also well up the field were Lilian Walsh and Ciara O’Connor who finished just outside the qualifying slots in about 16th and 18th! Well done girls on super running!!