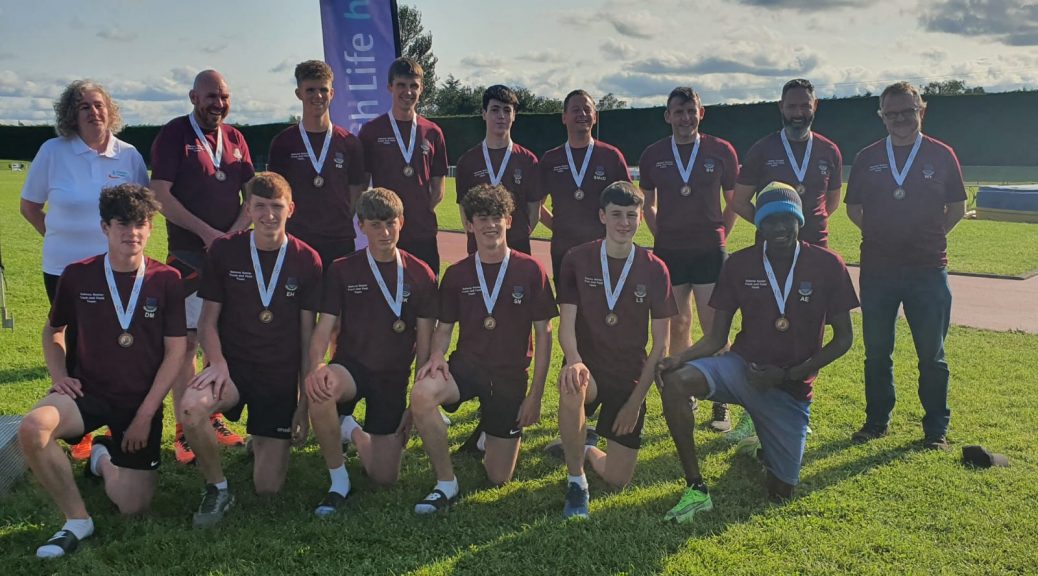 Sean McDermott did the rally call and team selection and a large Galway team of 16 athletes, including 9 Craughwell Men lined up for Galway in the National League today to win a fantastic National Bronze medal. The weather was ideal and the day was perfect for chatting and competing!

Knowing the points were the important thing, William Fitzgerald tracked the leader for the first few laps of his 5000m which ticked by in a slow 76-78s. When he was pretty sure that he had his number, William pushed on for the win in 15:38.01. Kyle Moorhead had a broken week’s training so wasn’t too optimistic before the race. He went for the win and took the lead on the final lap but got passed over the final 50m to finish 2nd with a near-pb of 4:03.95. Jack Miskella had a similar race – giving the win a good crack, but the sprint finish was very sharp and he got held off into second in 1.58.58.

Evan Hallinan scored a big PB and a new Club Junior Record in the Long Jump with a clearance of 6.42 for 4th. Not to be outdone, Lukas Schukat cleared a massive pb of 1.85 in the high Jump for 4th place on countback. Evan Quinn got a large pb in triple Jump with a fine clearance of 10.95.

In the Javelin, Andrew Power threw a massive 31.36 for 4th place to secure a further 5 points for the team.

In addition to the Craughwell lads there were fine performances from the Galway club teammates Sean Kelleher (Walk), David Mannion (400mh), Stephen Mannion (200m), Abas Edris (steeple), Tommy Farragher (Hammer, Discus), Justin Lane (PV, WFD) and Oliver Gaisetti (Shot). Well done to all the lads and to Sean Mac for herding the cats, ably assisted by our own Mike Tobin!

There was also a fine track event in Ballinasloe, organized by Tribal running with a full program of events – by all accounts the event was great craic and well organised, providing some good late-season competition.