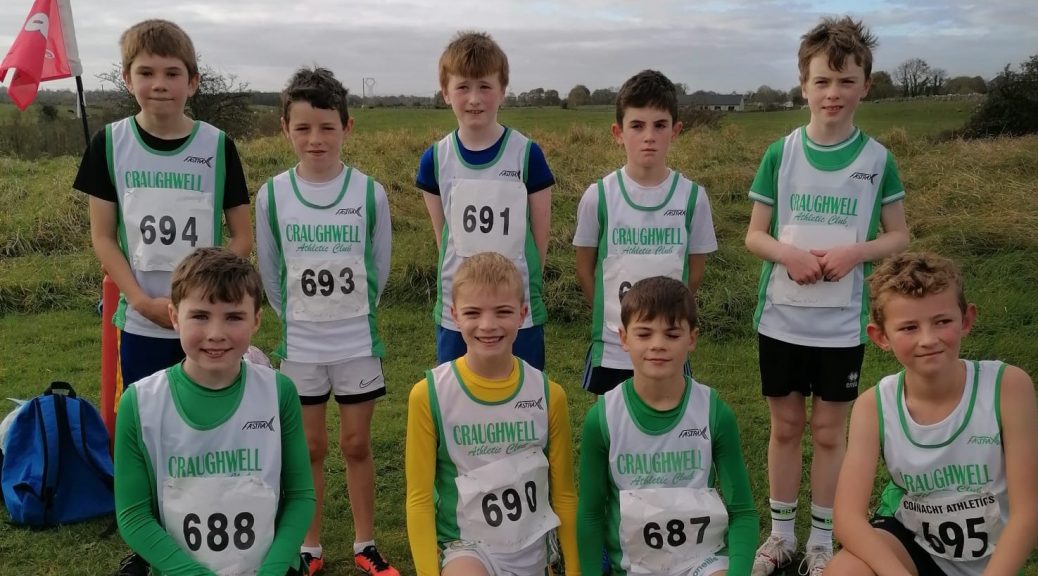 As the week approached – I was getting texts from various coaches and athletes from about Connacht looking for an insight into the Bushfield course. I told them all the same thing: “Possibly the best course in the country, and ideal preparation for Santry”. It didn’t make a liar out of me as the weather, course and fields collaborated to make for ideal cross country conditions! Well done to all the organizers, especially host club Loughrea AC.

The fields were MASSIVE – almost 200 finishers in the u11 category alone! The racing was superb from start to finish! For a change, I’ll cover the races in reverse of running order – from Senior down to U11.

In the Senior men’s race, Craughwell had a team of 4, with Jamie Fallon, Jack Miskella, Paul Joyce and Piotr Prokop lining up. Jamie looked fit as he rocked up from the car so I knew he would be one of the favourites. He immediately went to the front of the field, accompanied by Emmet Dunleavy who is his coach and training partner in Dublin.

The two immediately put a gap on the rest of the field and it was clearly a two horse race, with Emmet tracking Jamie stride for stride. Unfortunately about 2.5 miles into the race, when looking very comfortable – Jamie got a sharp pain in his foot and had to stop. He tried to walk and jog it off but couldn’t continue. Hopefully it is not too serious as he is in super shape. It was a shame for the race itself as they both looked to be having a very strong run and would have had a right battle.

Jack Miskella had his best ever run over the dirt, and his fastest 8k full stop as he cruised through the course at about 3:25/km to finish in a fine 4th place. Jack started conservatively and worked his way up brilliantly, looking really strong at the finish. Not far behind Jack in 8th place, Paul Joyce started another comeback with a fantastic outing. 8km is a long way for Paul at this stage of his training but the club indoor 800m record holder managed his energy nicely to finish ahead of some superb runners.

Next home for Craughwell in 26th overall but 5th Senior was Piotr Prokop. Piotr ran his favoured plan of building from the back – this can be a little tougher to execute in Bushfield due to the many tight turns but he made great strides.

Emma and Catherine start their comebacks!

Emma Boyle has had a truly HORRIBLE 2021 with a very stubborn long-term achilles injury but showed great character and persistence throughout to come out of it stronger. As someone who is often coming back from injury, I can attest that race-pacing is very hard to judge on your first race back – Emma decided to err on the side of bravery and went right at it with the lead group.

She tucked in nicely with the leading 3 and looked extremely strong until the last 800m where her fast start caught up with her suddenly. She finished as 2nd Novice woman and I think about 4th overall in an absolutely fantastic run.

Catherine Noonan is another person who has had a torrid time with injury which has really sidelined her for the last several years and still makes it hard for her to push herself to her full potential. She had an absolutely outstanding race, drawn into several battles and finishing with an outstanding kick on the home straight to pass two and finish as 10th Novice lady.

U19 Boys Sweep the medals

Our u19 boys team of Sean Cotter, Oisin Davis, Luke Burke, Anthony Boyle and Ross McGuinness (stepping up from U18) ran together for the first time this year. Ross took the early lead as he usually does, but he was looking over his shoulder to see who might share the work. Eventually Oisin Davis took over the reigns and pressed a solid pace. The guys were mixed in with some really classy U17 athletes who were running a 5km race instead of 6.6km and could afford to drive hard from 4km out.

With a lap to go the two u17s pushed ahead for their finish and this left Sean and Oisin working together alone for the final mile, with Ross just a little behind. Sean is a super racer over the dirt and put his stamp of class on over the last km to finish a clear winner, with Oisin holding onto 2nd and Ross 3rd. This is the second time this trio have won 1-2-3 in the Connachts (first time as U16s in 2018) and only the 3rd time it has ever been done by Craughwell AC.

Luke Burke finished 6th and Anthony Boyle 7th in strong runs. A lot of the guys are working their way back from setbacks so hopefully if luck comes right, this will be a competitive team for the national Juniors in 2 weeks and the u19s in December.

Killian Walsh has been getting stronger by the week and is really catching the “bug” now. He had a fine run to finish as 10th u17 in a really tough field. He looked strong throughout and caught people all the way – definitely Killian’s best run yet – watch this space!

The u17 and u19 girls found themselves in a really tough age group but they ran really well. the race went off at a ferocious pace and they found themselves slightly adrift at one point. At the end, Emily finished a fine 6th in the u19s and Grainne Tuohy 8th after a start which looked like she might be cast adrift! Anna Cotter who is going from strength to strength was first of the u17s in 7th, followed by Aoibhe Carr in 8th and Holly O’Boyle in 9th.

Declan O’Connell has been tearing up all the age groups in Connacht of late, but met his match today while stepping up to the U15s with a very strong South Sligo athlete. The two broke clear of the field early and had a brilliant battle all the way. I think I might have had a slight part in Declan’s downfall as with about 800m to go I gave him a shout on and he visibly increased his pace and put a gap on his opponent.

I jogged across to the corner and by then he had started to fall back as the pace caught up with him! He did great to keep the head up and keep ahead of a very good chasing pack to win Silver. this will be super preparation for the nationals for Declan.

The u13 boys was another top class battle as Stephen Joyce showed incredible character and dug deep to win a brilliant Bronze in the large field. Stephen was closely followed by Alan Hallinan (4th). Oisin O’Donovan and Alan Warde also finished beside each other in 22nd and 23rd respectively to win team Bronze. The team was rounded out by Zach Keane and Osiin Fallon in 49th and 55th positions.

In a super-high standard u13 Girls, Aeveen Kelly was again to the fore as she finished a fine 7th. Next home for Craughwell was the tenacious Claudia Coyle in 18th followed by Alva Horan in 32nd and a delighted Aisling Lavan in 38th, stepping up.

The field size in the u11 race was exceptionally large – making it a challenging course for the youngsters since the sometimes narrow technical paths of Bushfield cause a large field to spread out heavily. No less than 10 Craughwell AC athletes too part in the boys event with Darragh O’Donnell coming home first in 11th followed by his friend Donal Coyle in 12th, James Niland (17), Darragh Browne (29), Sean Colleran (45), Ciaran McNena (46), Rian O’Donnell (66), Lincoln King (74), Sean Niland (75) and Jake Molloy (97).

A smaller but no less excellent team took part in the u11 girls with massive runs from Sophie Meehan in 4th (first Galway woman!) followed by Grace Drysdale (34th) and Laoise Colleran (44th). Outstanding running all!!!