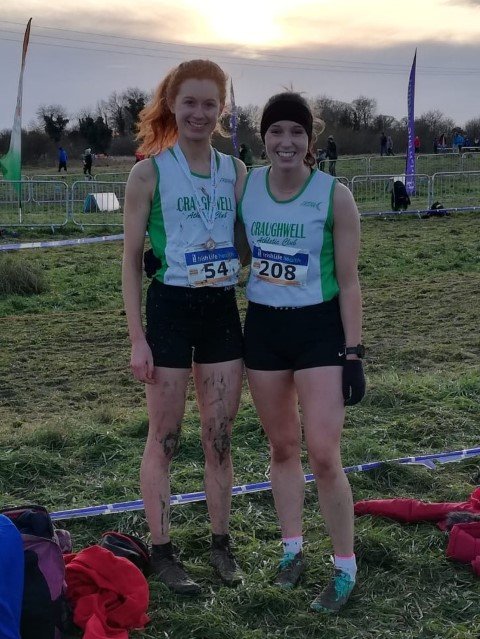 As any runner will tell you, it’s been almost impossible to find a dry patch of grass to run on this last month or two, so when the venue for the National Unevens and Novices was announced as “the Cowpark”, we didn’t feel too optimistic about finding a dry stretch there! So it transpired as the course was flat but almost totally covered in pretty deep mud – several people slipped into the mudbath and many spikes were left behind!!  Despite all that – Craughwell A.C. athletes had a lot to smile about, enjoying perhaps their finest ever day at the national stage, especially at the older age groups with several medals and two podium finishes.

Caron Ryan was the outstanding Galway Senior Athlete of the day as she drove hard all the way to finish in a superb third position in the National Novices, ahead of a large field. She had a big gap on 4th but it still made for an exciting finish as Irish International speed-merchant Nadia Power fresh from the European Cross Country in Portugal bore down on Caron at phenomenal speed on the relatively firm finishing straight, but the gutsy Craughwell girl did enough to hold her off. Caron felt in her last race at Abbotstown that she didn’t really do herself justice and this podium position was redemption of the sweetest sort!  Caron’s teammate Sinead Gaffney had a fantastic run behind her, finishing well up the field. 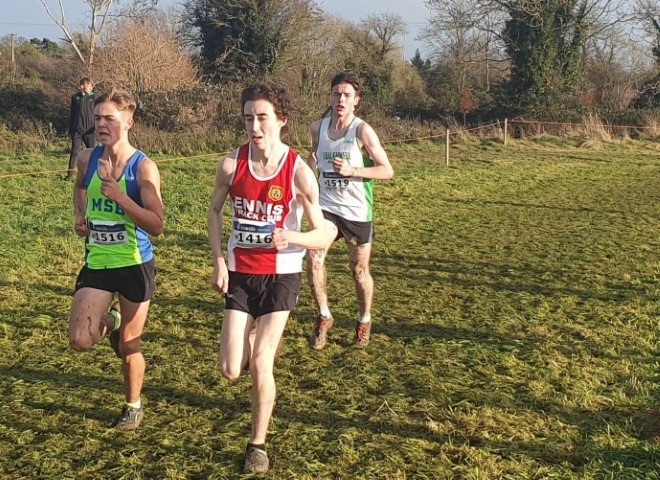 Sean right in the mix with the breakaway leaders

Sean Cotter had the best Galway Juvenile run of the day to take u17 3rd in a phenomenally tough field. Sean has had consistent success over the years but this was his strongest ever Cross Country performance.  Sean was never far from the business end of things – going out hard with the leading group of seven and as the laps progressed it broke to a breakaway group of three with Sean right in the mix.  Just on the last lap, a slight gap started to appear between Sean and the second placed athlete but he kept his concentration and didn’t slow enough to give those behind him any hope. 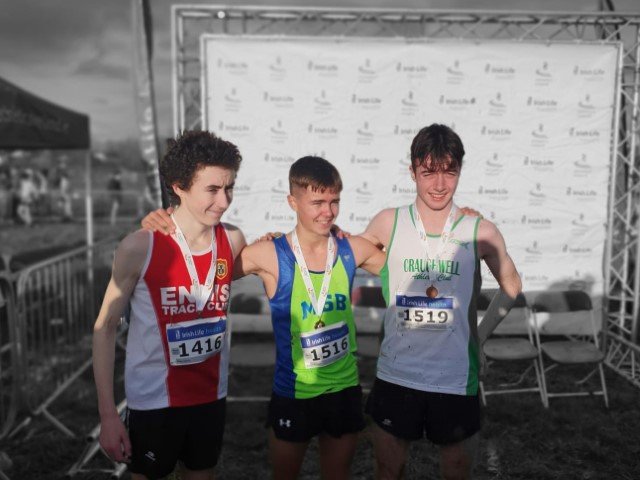 Mark accidentally hits some “effect” button on the camera!

The Novices was the first national senior event Craughwell ever competed in – if I recall correctly the crack team on the day was me, Michael Tobin, Diarmuid Quill and Bill Doran.   I’ve ran many novices since, but this was our best team position, and the first time we all came away with medals!  This field was as large as any I can recall – with well over 200 competitors battling for position over the twisty muddy 6k route!  The Craughwell team of Damian O’Boyle (28th), Kevin Mooney (40th), Jack Miskella (41st) and Mark Davis (57th) were first Galway club home, 5th of the 26 club teams, a record high for the club at the event.  Really great to see the Galway clubs attack the event in force – strong teams from Craughwell, GCH, South Galway and Castlegar and other individuals well up the field.  The top 6 from Galway were good enough to win a historic Bronze medal – I say historic as I can’t recall the last time Galway won a county Novices medal, and the older result links are dead on the AAI site so I can’t check!

All four Craughwell Athletes scored on the Galway county team so each took away Bronze medals for our efforts, sandwiched between the excellent James Frizzell and Jack Maher of GCH.  Damian shook off his jetlag to run superbly – he was in the top 10 for much of the race but faded on the last lap as the mud took its toll.  Jack ran hard throughout – his finest ever cross country run in my experience.  Kevin built from the back and really charged on the final lap, putting in an amazing finish.  He breezed past me with about 2k to go (giving some advice: “it’s dry at the edge Mark”) and forged ahead just catching and passing Jack at the end.  I have had a hamstring problem for the last few weeks so haven’t been running but was pretty happy with the run in the circumstances and definitely the result! 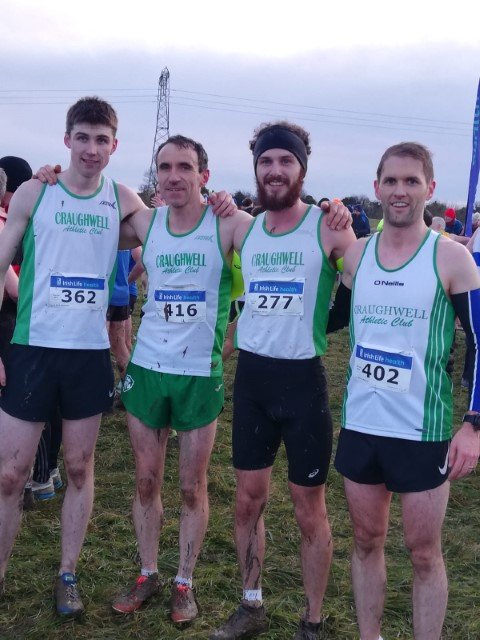 Boyz in the Mud

[Edit: I since dug around and found the results from the first Craughwell AC trip to the Novices back in 2005 – the individual results are here and the team results here.  We were second-last team on the day, but I remember a big cheer from the kids on the team bus when we announced we beat Athenry :).  James Lundon has his Athenry AC report on that race here]

Mathys Bocquet stepped up in age to take on the u15 3500m. He had plenty of confidence after his 5th place finish in his u14 race three weeks ago. Despite a fall on the last lap, Mathys had a phenomenal run to finish in 14th position, beating all those that were ahead of him in Abbotstown! The fall came at the worst time and I’ve no doubt it cost him a few positions.  Mathy’s teammate Killian Walsh had a solid run in the tough conditions.  Killian played another vital role for Craughwell – after the race he washed down his spikes as they proved a perfect fit for eventual “Cinderella” Bronze medal winner Caron Ryan who had forgotten her own! 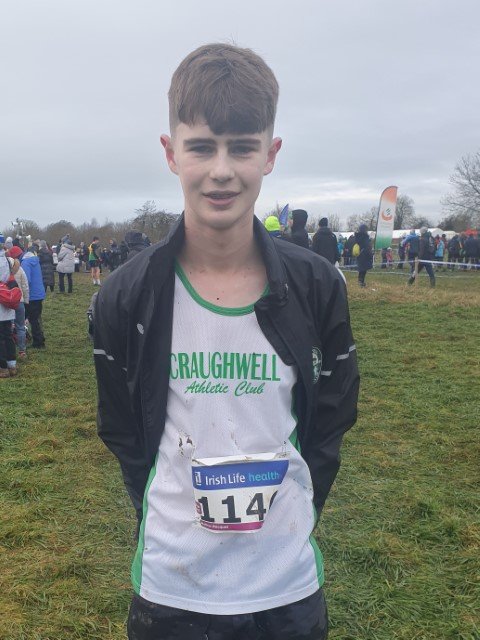 What a year for Mathys!

In the u11 boys Race, Stephen Joyce had a sensational run to finish in about 11 to 14th position, winning a Bronze Medal. Stephen’s clubmate Alan Hallinan finished a very strong 57th. 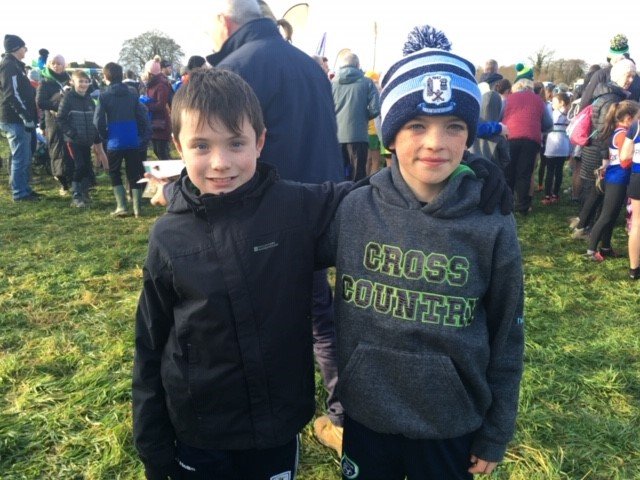 Stephen and Alan wrapped up warm after!

In the u15 Girls 3500m race, Holly O’Boyle was first Craughwell Girl home in a great run, followed by Anna Cotter and Leonore Church. The day started with the u11 girls race, Claudia Coyle and Aeveen Kelly had solid runs all the way. In the u13 boys race, Fionn Higgins had a great run to finish in 82nd among the 160 competitors. 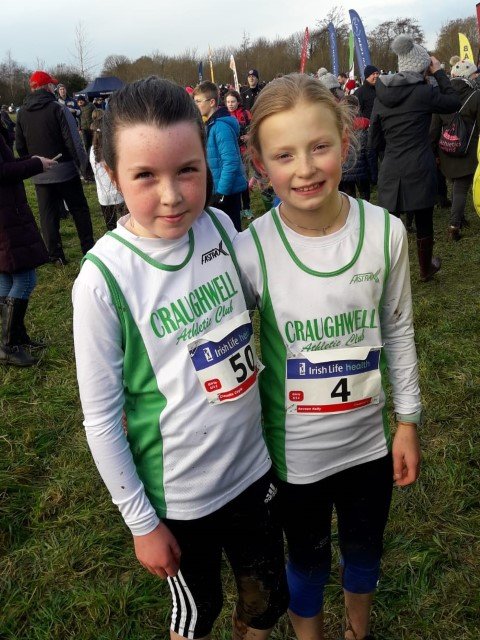 Claudia and Aeveen were brilliant! 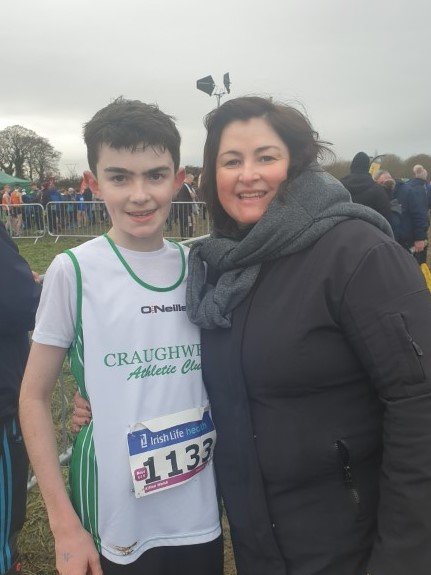 Killian and proud Marese after the race