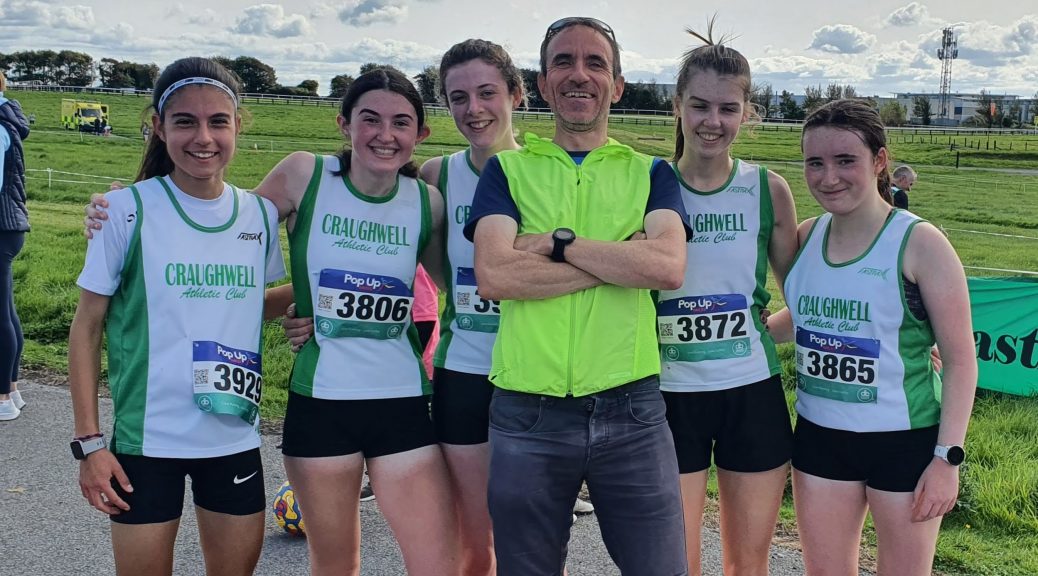 Cross-county season kicked off with a bang in Castlegar on Saturday for the annual Castlegar Open Cross country.  The race continues to grow from strength to strength and the weather on Saturday made it another superb festival of Athletics.  The course was slightly changed from previous years, with the steeper back hill replaced with more of a long undulating drag.  The racecourse in Ballybrit provided a perfect but challenging route with really not much respite on each of the 2km laps.

The first race of the day was the 4km race which included the ladies senior race and the boys and girls u17 races together.  Adara Salvo showed the effects of her consistent training with a clear Gold in the u17 girls race with a strong pace throughout, finishing strongly in 16:14.   Adara was closely followed by Katie Hoare in 2nd and Holly O’Boyle in 4th, in a strong return to fitness.

Despite a caution against a fast start, Liam O’Connell led the field through 1.5km before the sniper hit and he held it together admirably to finish 5th.

Next up was the men’s senior 6km race with a very stacked field.  William Fitzgerald has been out of action since March with a bad achilles injury and this was his first test off about a month of light training.  He came through with flying colours, coming home in 3rd place, just 15s behind the winner.  Patrick Noonan was a further 15s back in 5th.  Ross McGuinness had a storming run to finish in 10th, with Kyle Moorhead in 15th and Mathys Bocquet in 19th.  Mark Finnegan made his cross Country debut for the club to finish a superb 28th.  The men did enough to seal second behind a very strong Ennis team and walked away with 200 euro for their trouble.

The open 2km was a mixed affair with Keelan Moorhead showing real quality in making up a huge gap over the last 200m but was just a second behind the leader at the end for a great Silver.  Cian Conway showed his pace also to close hard and seal 4th.

The u15/16 girls 3km was a thrilling battle.  Smart-running Claudia Coyle got into a fascinating battle for the lead against her Longford opponent in which she was just beaten.

Amelie Bocquet came home in 13th place.  The u16 boys 3k was also a cracker with Lulke O’Sullivan tracking in 2nd all the way only to just get pipped by his clubmate Stephen Ruane in a fantastic last 200m.

Alan Hallinan was an impressive winner of the u13 Boys 2000m in 06:22.  Oisin O’Donovan came 7th followed by Donal Coyle (9th), Zach Keane (10th) and Charlie Daniels (14th).  In the u13 girls, Sophie Meehan was well up there in 6th place, closely followed by Aisling Lavan and Grace Drysdale (22).

Well done to host club Castlegar on another fine event and keep an eye out on John O’Connor’s Flickr page (Photos) to see some quality shots emerge over the next few days!