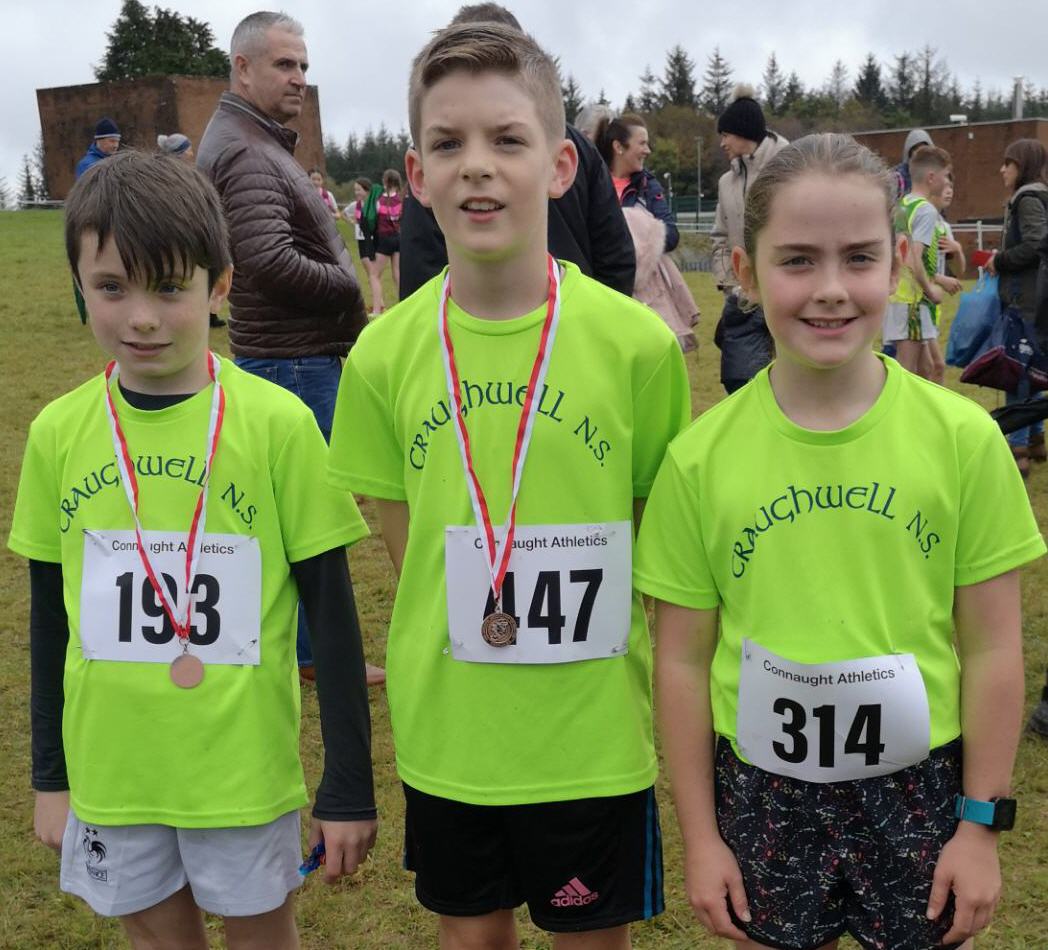 A little late in getting this report up onto the website but here it goes for historical purposes!

The Connacht finals of the primary schools cross country took place a couple of weeks ago at Moyne Community College in Longford. I know, people are always asking when did Connacht take over Longford– I guess with Galway now the 4th most popular place in the world, it’s cool to be from Connacht! Interestingly I see on Wikipedia that it says Longford was added to Leinster by King James I in 1608 and had previously been considered part of Connacht – so I guess the 1607 version of the race might have been held in Moyne too!

There with many superb performances by athletes from the club on the day. Races got underway at noon with the Junior Girls 800m where Craughwell NS’s Mia Hollingsworth was first home from the club in an excellent 15th place, leading her team to 5th place overall just 7 points shy of bronze medals – with Gemma Cloonan 31st, Beth Glynn 40th, Jenna Brady 59th and Aoileann O’Connor 65th. Seven points is nothing in a cross-country, less than 2 places per runner, probably less than 2 metres per runner – so the girls were very unlucky not to score a team medal. It would have extended a 9-year winning streak for Craughwell NS teams to feature in the top 3 in Connacht, but unlucky to miss out on this occasion. 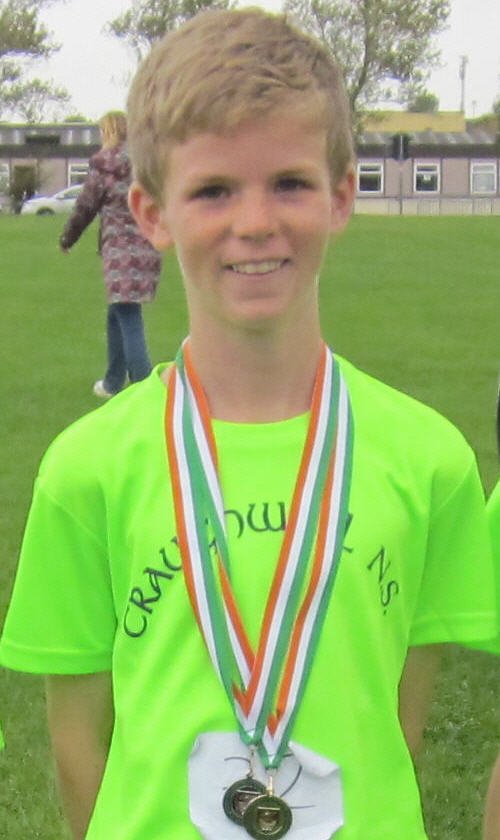 However that close miss was quickly eclipsed by an outstanding run from the youngest member of the Moorhead running dynasty – with Keelan running an absolutely incredible race to place 6th overall in the Senior Boys – the highest place ever achieved by a pupil from Craughwell NS in that race. To do that a year out of age is testament to Keelan’s talent as there have been many fine runners from Craughwell NS taking part in this race down through the years.

The previous best finish was 8th place and was jointly held by Keelan’s older brother Kyle along with Ross McGuinness. We need to bottle the sibling rivalry that brought that run out of Keelan and reapply it as often as possible! If there was a battle for Craughwell’s most talented athletics family, the Moorheads would definitely be up there near the top with all three of Kyle, Jade and Keelan excelling at the highest levels.

Kyle is picrtured across after his 8th place finish in 2014.

Back to the races, Katelyn Walsh (Craughwell NS) had a fine run in the Senior Girls 1000m taking 16th place overall – a super run a year out of age and next year Katelyn will be eyeing up the top placing of 9th place held by Clodagh O’Meara in the senior girls race to become Craughwell NS’s top girl finisher! Full details of previous performances from the school are here.

Ballymana Ns’s Laura Flynn had a strong run in the Junior Girls race placing 32nd while in the Junior Boys race, Stephen Joyce (Scoil Iosaif Naofa Oranmore) has a marvelous run to take individual 3rd place and lead his school to 5th place in the team event. Craughwell NS placed 10th in the junior boys race led home by Alan Hallinan in 14th place followed by Darragh O’Donnell, Sean Colleran, Charlie Daniels and Zach Keane. And misfortune befell the exceptionally talented Ballymana NS senior girls team who were warming up when their races started way earlier than expected and the Galway champions missed out.

Full results of this years Connachts are here.