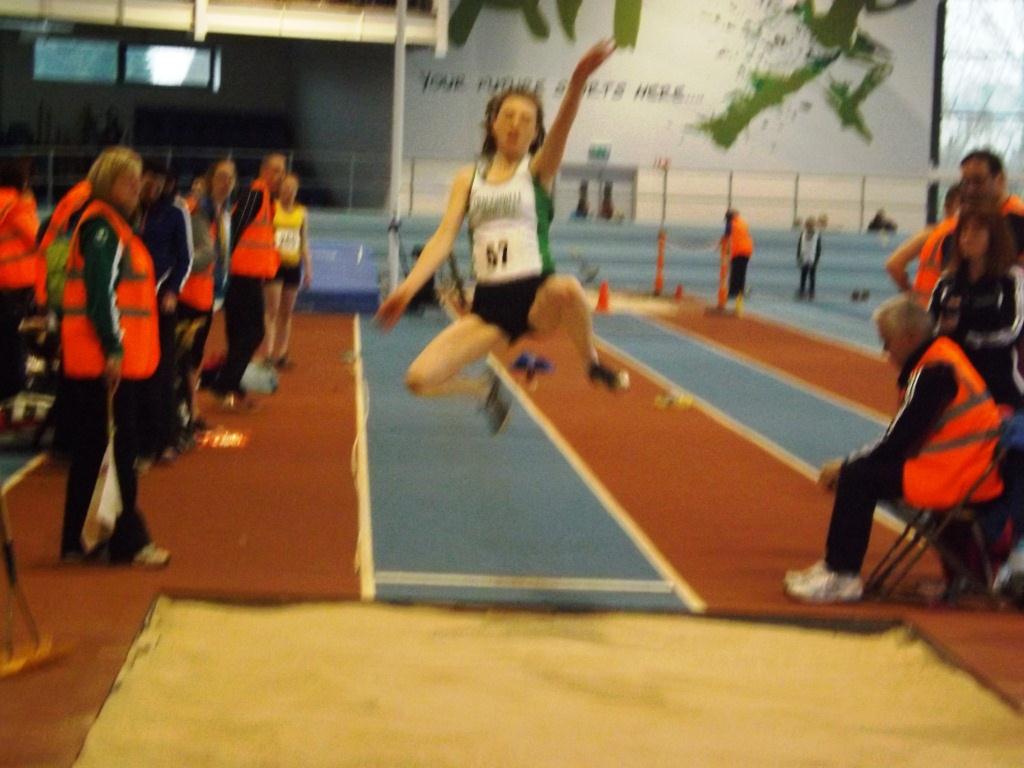 Cathriona Farrell was in superb form at the Galway Indoors at the weekend where she cleared a new PB of 1.80m. The jump ranks her 5th on the all-time Irish indoor list, a remarkable achievement and just a taste of what’s ahead. Cathriona sailed over 1.65m, 1.70m and 1.75m on her first attempt. Catching the bar at 1.80m on her first attempt, Cathriona soared over it on her second attempt to the delight of everyone in the club. Happy with a PB, she retired at that point and will be in action again next weekend in the National U23s.

Cathriona wasn’t the only athlete in flying form. Fresh from a 2-week warm weather training stint in Portugal, Sineád Treacy took to the track in the 60m and in an incredibly tight finish took the Galway senior title ahead of GCH’s Laura Ann Costello by the tiniest margin of 7 thousandths of a second. Sineád’s time was 8.043. If you have your calculator to hand, Sineád was travelling at a speed of 7.46m per second or almost 17 miles per hour and finished about 5cm in the lead by my calculations! Sineád made it a sprint double later in the day with victory in the 200m in a time of 26.19s and for good measure added another gold in the senior long jump with a leap of 5.08m.

Conor Duggan was also in commanding form with victory in the Senior Men’s 60m in a time of 7.28s (a new club record!), with Aidan Conneely placing 5th in 7.51s. Conor also broke the club’s 200m record when adding silver in the 200m in 23.55 with Aidan 4th in 24.28. Both men combined with Kelvin Olayemi and Gavin Cooney to place 2nd in the 4x200m in a time of 1.38.7 which is also a new club record for the indoor relay. A good day for Conor when breaking 3 club records!

Paul Joyce retained his Senior Men’s 800m title with victory in a time of 2.04.0 while Gavin Cooney placed second in a time of 2.11.3 shaving a quarter-second off his recent PB. Damien Larkin wrapped up the senior track action with a 4th place finish in the 3000m in a time of 10.26.4. The club’s junior record fell to Jamie Fallon in the same race with a 3rd place finish in a time of 9.07.2. Caron Ryan made her debut on the track in the Junior Women’s 3000m and took the gold with a time of 14.09.1 just 7 seconds away from the club record held by Maeve Curley, while Ciara Greene placed 2nd in a time of 15.27.2.

And special mention to one more event that electrified the crowd for 4 minutes and 1.47 seconds … the elite senior mile. Organised specially on the day for a number of athletes who were having a crack at becoming the first person to run a sub 4 minute indoor mile on Irish soil, it was a fantastic spectacle for the large crowd to witness. AIT’s John Travers was the man to watch and the elite group wound its way around the indoor arena, the history-making attempt was on ‘track’. Entering the final lap with the magical barrier looking likely to be breached, Travers came up just short by 1.47 second but had the secondary satisfaction of it being the fastest indoor mile ever ran in Ireland.