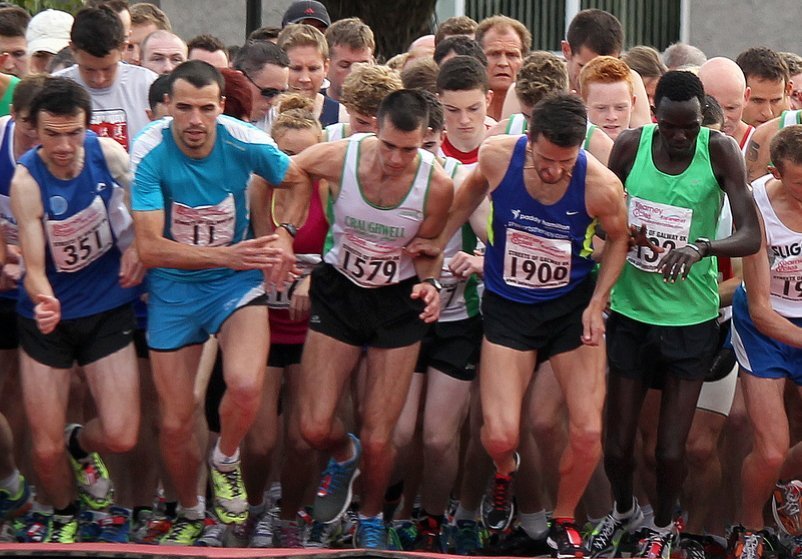 The Streets of Galway is a race that has it all – over two thousand cheerful runners and walkers chatted and packed in alongside a top class field including Olympian Mark Kenneally, Kenyan Freddy Kerron Sittuk and others.  This year the course had changed – the conscensus from those I spoke to was that it was a better course than before, if possibly a tiny bit slower (though this could be the windy conditions on the night).

Almost 50 Craughwell AC runners took part this year – slightly down on previous years, but still a very strong showing.  The Senior men’s team had a new look – without the familiar warriors of Gerry, Martin, Paul, Peadar, Johnny, Mark, etc on the score sheet, but it was still as strong a squad as we’ve put out in a long time!

Jason Broderick led the team by example, running a superb 26:28 to finish as second Galway Man and 9th overall.  This is almost a pb and another brilliant run for Jason as he continues on the comeback trail.  Mind you, he might want to watch out for his mother – Kathleen ran a super 38:00 to finish 3rd in her category, a superb debut in the streets!

Next home for Craughwell was Irish International Jamie Fallon who ran a fine 27:16.  This run was enough to win the Junior prize, a fine achievement for a 16 year old.  Third for Craughwell was Neil Greaney in a solid 28:00.  After an exceptional track season, Neil was slightly disappointed with his time, but took some encouragement from his prize for second Junior.  There’s no doubt that Neil is capable of a much faster time – he has raced a lot recently and this might be part of it.

The 4th scorer for Craughwell was Ollie Mullins who finished his first streets in 32nd position in 28:20 – a fantastic debut.  Ollie started back in the pack and his chip time was actually 28:02, a time that would have put him several positions further up.  I think he’ll be pushing up the next time, he well deserves to be up there!

As a team we came 3rd – just narrowly pipped by a strong GCH team.

All in all – a great way to end the season, after one of the most successful track seasons in the club’s history.  Well done to Harriers – roll on next year!  Full results are up here.  Thanks to John O’Connor for the above picture – check out the famous 77 eden hill for some more amazing pictures from John.