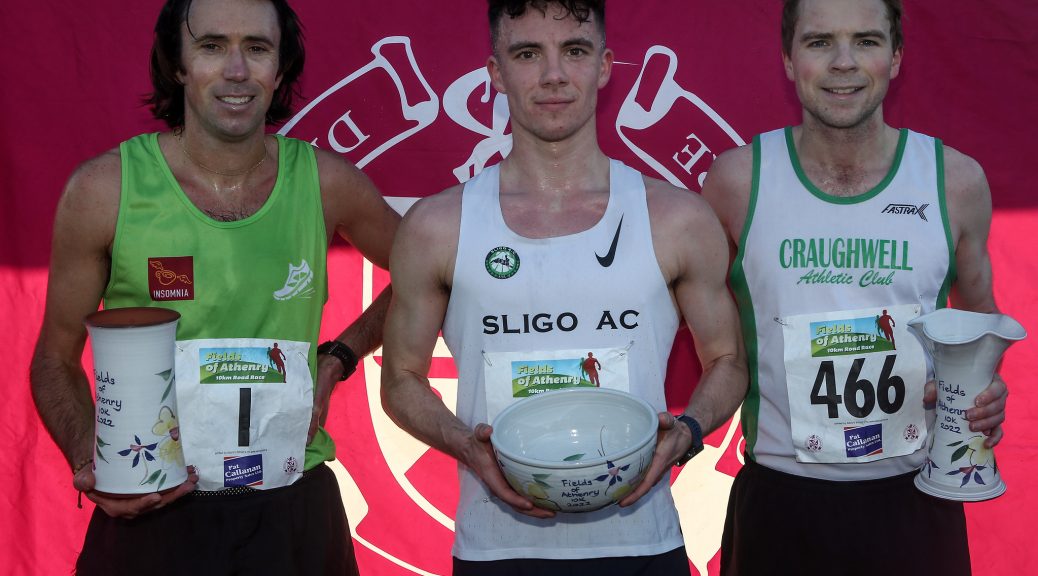 Christmas season brings a rare break in competition in Athletics as the athletes recover from their Cross Country exploits and prepare for the Indoor season to come.  Often the athletes take the opportunity to venture onto the roads for the seasonal road races and this was true again this year.

Jamie Fallon took the trip to Telford in the UK on 11th December to run a high quality 10km road race.  Despite icy conditions, Jamie smashed his own Craughwell AC 10k club record, completing the route in a superb 30:26.  On the same day, Shauna Bocquet travelled to Cork for the Newmarket 5km, her first race in a long time.  Competing in the Wheelchair category, Shauna flew to a huge personal best of 13:57.

Record Entry for Fields of Athenry

The fields of Athenry 10k road race continues to grow in strength year on year, enjoying a record entry this year of over 1200 runners.  Following his Telford time, Jamie Fallon was one of the favourites, but would have his old nemesis Rio Olympian Mick Clohissey to contend with among others.  Knowing there were some big kickers in the field, Jamie determined to settle things by 8k and employed several long surges in the race to break the leading pack.  William Fitzgerald stuck with the leaders for the first 3km, but had been sick over the break and he knew it wasn’t going to be his day so he eased off and cruised home from there.

As the 9th km was completed, Jamie had dropped Mick Clohissey by 30m, but National Steeplechase medallist Finley Daly had managed to ominously get back in touch and after a huge last km he took the win in 30:46, with Jamie close behind in 30:53.  Gavin Cooney (12), William Fitzgerald (13) and Kevin Mooney (15) completed the winning Craughwell AC team.  Gavin ran his fine 33:53 10k in a pair of beaten up old no-carbon Pegasus, showing great fitness. It should be very interesting to see how he gets on in the Scottish Cross Country, representing his Scottish club Edinburgh AC. The season looks very promising for him!

There were many more excellent runs, including a very strong showing from Dave Evans in the M50 category to clinch a top-50 shirt with ease, and a fine outing from Emma Boyle well up in the female category under 39 minutes.

New year resolutions began early with the popular Resolution run 5km in Galway on New Year’s Day.  Craughwell AC’s Patrick Noonan took the win in a compelling battle with Abas Edris of Castlegar AC. Patrick tuned out and sat in for 2 miles and drove home hard when he sensed some tiredness in his competitor to win by 10s in 15:30.  This was Patrick’s first time getting the better of the popular and talented Abas and his final km was a fine 2:53 – he really is in phenomenal shape. The course is flat, but twisty in spots and definitely not short (perhaps even a hint long according to GPS watches) so a tactical 15:30 was a great time. I tracked back through the history of the event on redtagtiming, only the great Gary Thornton has run faster – and likely on the old course, making this a course record?

Two-time race winner, Sean Cotter had been sick the day before so left his racing shoes at home and decided to “tempo” the race with his friend Donie Devane (returning from injury) and Eurocross entrant Laura Mooney of Tullamore Harriers. Freaking out the very-serious and hard-pressed athletes about them by chatting easily through the run, Sean came home as first Junior Male in 16:30.

There was good news at training in Craughwell this week with confirmation of William Fitzgerald’s selection for the Irish u23 team for the Cross Cup in Hannut, Belgium on 22-Jan next year.  William earned his selection in the trials at the recent National Cross Country in Downings, Donegal.