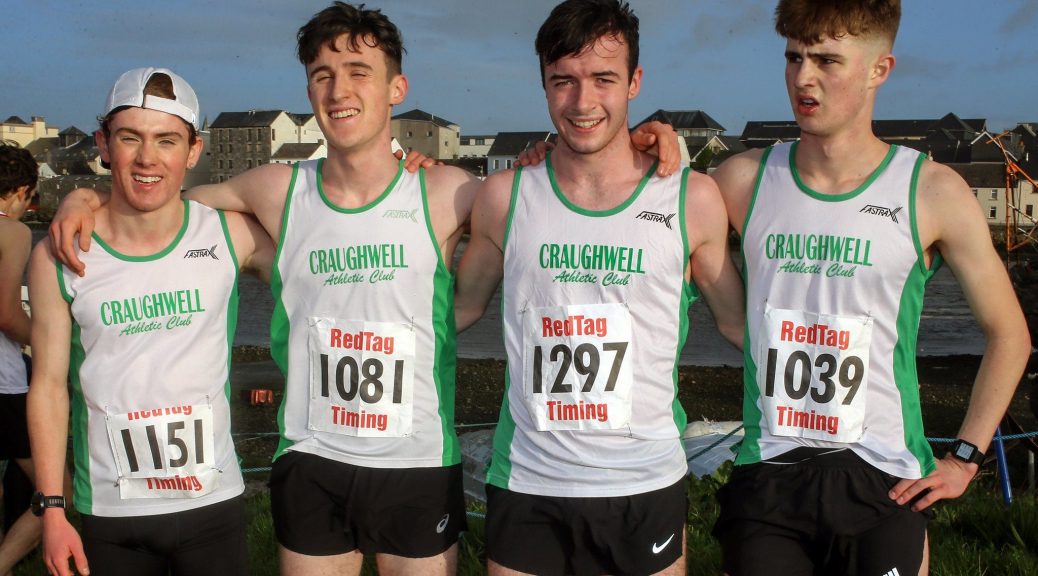 Christmas is a rare quiet period for athletics, and during this gap between Cross Country and Indoors the athletes sometimes venture onto roads for a road race or two to have some fun and gauge fitness for the season ahead. Galway is lucky to have two high-quality races on its doorstep – the Classic Fields of Athenry 10km and the Resolution Run 5km. Thanks to Craughwell AC’s John ‘O’Connor for the photos in this article – check out his other work over on 77edenhill!

Craughwell AC had a record two on the podium for the fields – Jamie Fallon coming home in second with a fabulous time of 31:13, just 5s off the Club record. Jamie ran the first 7km with triple Craughwell-10 winner and Olympian Mick Clohisey, and still looked good going through the 8km mark in 24:48, on course for a sub-31. However, like so many in Athenry the slight drags in the 7th, 8th and 9th km took their toll and Jamie finished just outside on this occasion, but a huge personal best and learned a lot from the experience!

William Fitzgerald wasn’t sure about the early pace so sat back a little from the leading two and ran the race solo just behind. Like everyone else, he felt the drags on the home straight – but probably had the fastest last km in the field (perhaps apart form Mick) with a 2:56 final km. William finished with a fine 31:25, just 12s back from Jamie, an excellent 10km debut! He wondered afterwards what might have happened if we went with the pace but these are the questions with no answer!

Ross McGuinness was 3rd home for Craughwell in a solid 34:30, first u18. Ross was followed by Fergus Kelly in 37:36 – good enough I think to win the team competition by about 6s ahead of a hugely impressive Castlegar. Well done all!!

Sinead Gaffney was 10th female in a very impressive 38:43 personal best. Grainne Tuohy, sporting an ominous sounding 666 bib number ran a hugely impressive 46:16 to win first u18. Congratulations to all the many Craughwell AC entrants.

The new years resolution run took place today in bright but extremely windy conditions in Claddagh. The annual race is an out and back course and there was really no avoiding the “wall of wind” which was a game changer in the 3rd km as they headed towards Salthill from Claddagh. Craughwell AC athletes did well again with the individual winner and 4 finishers in the top 6.

18 year old Seán Cotter sat in the chase group for the first couple of km and went on to win the race by making a big brave move at the 3km mark into the wind. Seán did the Eamonn Coughlan trick of “making one more and making it count” by sustaining his effort long enough to break many of the chase pack and pass the early breakaway leader Dave Carter. Seán finished in a fine 15:45 – a superb performance in the conditions!

Oisín Davis suffered for his early front-running but held on well to finish in 4th place with a road pb of 16:07, closely followed by Ross McGuinness in 16:08, a fantastic run by Ross. Both lads would definitely have been well under 16 on a normal day. 15-year old Mathys Bocquet put a long spell of injury behind him with a fine 6th placed 16:44 which was all the more impressive as he ran the entire distance solo and this was his first ever 5km!!

Not quite related to Christmas racing, but as this is a time for goal-setting, interesting to note that the Craughwell 10 link went live this week!! The early bird prices are in place until the end of January – not sure how much they go up by afterwards though!

Entries are actually rolling in already so it should be good!! We added a new Craughwell 10 page to the site which has past results, details, etc and even better photos, etc from the master John O’Connor which will definitely be interesting to look at for some!!