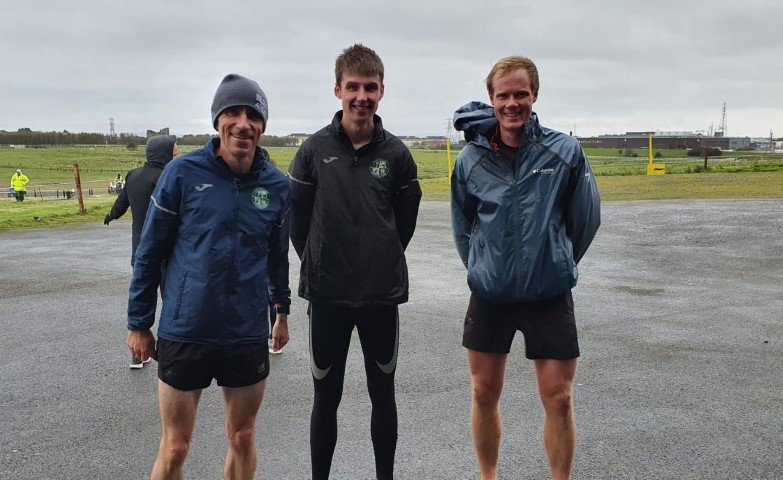 The wind was ferocious and conditions were baltic in Ballybrit, but the forecast rain thankfully mostly held off so it delivered a fantastic day’s running.  Ballybrit proved itself an incredible venue, especially in these strange times.  Everything is perfect about the venue: parking, toilets, an elevated area for spectators to watch the race safely (and dryly!).  The course was a classic XC course, and after the unseasonably dry weather in September was perfectly sound underfoot all around with not a spot of mud.  Host club Castlegar AC devised and marked out a gloriously challenging course – full of long sweeping downhills away from the stand and shorter drags back up, cambered and rough footing in places with no shelter from the driving wind.  We just HAVE to bring a big national event back here some day – it’s just MADE for it!!

The Senior Men’s 8km race was last to kick off and had a very solid field of what looked like 60 participants.  Craughwell were defending champions, but unfortunately were down a man so didn’t quite have a team to defend things with!  Jack Miskella, Mark Davis and Oisin Doyle represented Craughwell.  It was an interesting team competition and with the great Gary Thornton turning up for the first time in ages, it was clear that GCH meant business (cleared bouyed by the news Craughwell couldn’t field a team they felt they had a half decent chance).  Host club Castlegar have been building strongly of late with their squad boosted by recent tranfers like Irish Eurocross International Damian Landers and with Abas getting better with each race it was clear there would be a good battle.  In the end Thornton led his GCH team to a clear victory followed by Aaron Brennan (GCH) and Abas (Castlegar), David Carter (GCH),  Jack Miskella (Craughwell), Mark Davis (Craughwell) and Cian Coyne (GCH) to round out the top 7. Jack and myself had a nice over and back battle as often seems to happen on the country – I thought he was done for about 6km in but when we made the final push it turned out it was me that was finished!  I made the tactical mistake last week of introducing Jack to the inspirational coach Gerry Reilly in Dangan and he told me afterward he used some advice from Gerry to put me away nicely over the last lap!  I won first Masters though which I’m very happy with as I’m getting on and Galway have a lot of really strong Masters athletes at the moment.  Oisin Doyle had a super performance in his first XC in years finishing well up the field – he looks like he could be really good! We had a nice team in the Senior ladies 4km event which also incorporated the u18 girls.  Emma Boyle only found out on Friday that we had mistakenly entered her for the u20 women’s race on Sunday but she gamely turned up for the sake of the team.  Emma had an awesome run, building strongly as the race went on, continuously picking people off to finish a marvelous 4th over all and first under 20.  She looked so comfortable on the final km that she must have been almost disappointed to see the finish line.  Next home was 800m specialist Sinead Gaffney in I think 7th or 8th. Sinead tried to go out easy, but like so many of the field didn’t quite manage it and went went into debt, however following a recovery patch from 1.5-2.5km she rallied strongly and only 2 people passed her in the whole race.  Next home in the senior race was Grainne McDaid followed by Leanne Freaney both firmly building on the comeback trail. Craughwell ladies pulled off a surprise to many and won Silver in the teams, splitting the two GCH teams.  Hopefully this is the start of us seeing some much needed diversity in women’s team running in Galway in the future! Sarah – Most Happiest XC Finisher EVER!!

In the u18 girls which was run concurrently with the senior women, Sarah Kelly had a superb run to finish well up the field.  Not long ago, Sarah was a Camogie player that used to do some headspace runs about the same time as our crew till we coaxed her to join in with us.  Ever full of positivity and laughs she’s been a brilliant addition to the wolfpack endurance squad and now she’s running Cross Country and going from strength to strength.  She definitely looked the happiest Cross Country runner I’ve ever seen as she approached the finish line – after a fine run too! Kyle still rocking his T-Shirt from his time as an U13 Team Member!

The Junior Men and the u18 men had their own race over 6km.  At the moment at this age group Craughwell are very hard to beat.  It turned out that way with the top 6 positions going to Craughwell AC Wolfpack members.  William Fitzgerald running his trademark sit and surge style to win the u20 race clearly.  Behind William a good battle unfolded between Kyle Moorehead, Oisin Davis and Patrick Noonan. On the second lap Oisin and Kyle broke away from Patrick but he had a stormer on the last 2km loop to reel them back in and pass them for 2nd u20.  Next home was Oisin Davis (1st u18) and Kyle Moorehead (3rd u20).  Not far behind Anthony Boyle and Luke Burke had an excellent over and back duel for the final medal positions.  Anthony who was stepping up from u17 seemed to rally strongly in the last lap to win Silver in the u18 closely followed by Luke.  Excellent runs from both men, not least because they had a hard swim session in the morning!  Pff Triathletes! The victorious Junior and u18 Crew along with u16 Winner Mathys

[Slight soap-box moment! – Mark’s opinion, not the clubs]  We have a brilliant Junior crew this year and hope to challenge with them at the nationals .. if it does actually happen which seems unlikely now :(. Sadly the Galway XC was not a great preparation for them as there was only one other athlete in the race – a very fine u18 athlete mind you!  A few years ago a change was brought in at the County Board to reduce the length of the Senior men’s XC to 6km and allow teams to be entered which combined u18/Juniors and Seniors in a single team – kind of like the Women’s format or that used in national Juniors.  This is the same format used in Mayo among other counties.  While the change lasted, it made for an excellent few years of competition with large fields and allowed the best Juniors to try their mettle versus the best Seniors before leaving Galway and Connacht. It was also a draw for Juniors to run to help their clubmates to make up a team and build a rapport with seniors athletes in their area which kept them involved.

Inexplicably despite the obvious success of the format, it was changed back and standards immediately slipped again in Galway to the point where has-beens like me were plodding their way to the business end of things nearly winning overall last year.  There are three 8km races at connacht level so it’s not like Seniors or Masters are lacking for longer XC races, and for most Galway Seniors the national XC target of the year is the 6km Novices in Dec or 7km vets race in Spring.  It is too late for this Craughwell Junior team, but there are always strong Juniors rising all around the county so would be great for the youth from my perspective if we could revert to this format and support the young talent while also making it more fun for new Seniors to try the sport. I could enter them in the 8km to give them a race, but in my opinion 8km is just too far and too slow for most u18-u20s these days. [Soap box over :D]

In the u16 Boys race, 2020 Schools International Mathys Bocquet stepped up in age to tackle the 4km event.  The popular Mathys is a joy to coach and we had decided on a race strategy which consisted of him going with the pace until a certain point and then making his move from about 1300m in (towards the top of the first steep hill).  Mathys pulled the trigger at the appropriate point and didn’t look back.  He didn’t have it all his own way however and had some close company for a lengthy portion from a South Galway athlete and Gearoid King of Castlegar who also wasn’t far behind.  However it became clear after a few minutes that Mathys wasn’t just surging temporarily, he kept pressing relentlessly for the remainder of the race and managed to set a good sized gap on the chasing pack by the end. Holly gets off quick with the u16 girls

In the u16 girls race Holly O’Boyle stepped up in age and almost missed the start as (ahem) someone asked her to do her warmup too late!  Holly went out a little too hard but settled and finished well up the field in 6th position overall. Declan O’Connell had a fine performance in the u14 boys event, battling all the way to win an excellent Silver medal.  Stephen Ruane was 7th and Keelan Moorhead 10th in the same race. Stephen Joyce had a sensational battle leading all the way to win his u12 2km race in a very close race, with Alan Hallinan stepping up in age to win Bronze in the same race.  The other Craughwell finishers were Alan Warde (7th), Oisin O’Donovan (11th), Zach Keane (12th), debutant David Frazier (14), debutant Keelan Griffin (18), Faye Whelan (24) and Killian Burke (29).  The u12 team seemed sure to win with an excellent  22 points but ended up tied on points with a strong South Galway team and took Silver by virtue of the 4th placed finisher. In the u10 girls, Sophie Meehan led the way for Craughwell with an excellent 4th placed finish.  Sophie was 14th last year and her target was to crack the top 10 – she sure smashed that target and by all accounts it made her post-race hot chocolate taste all the sweeter!!  Sophie was followed by Lola Whitney-Mangan (20), Faye Whelan (21), Briana Seoige (30), Maggie Brennan (32), Ava Burke (36) and Leanne Hirst (37). The u10 boys were the first race of the day and the Craughwell quartet of Darragh O’Donnell (4th), Donal Coyle (5th), Sean Coleran (8th) and James Niland (9th) sealed a famous victory in the largest field of the day with 56 finishers.  They were followed home by Lincoln King (13), Ryan O’Donnell (17), Ruairi McNena (23),  Sean Niland (28), Ciaran McNena (35), Luke O’Dea (39) and Cormac Burke (56).
In-Form Damian Wins XC Meet in Louisiana
Meanwhile, over in Louisiana Ragin Cajun Damian O’Boyle had an absolute stormer to win overall in the ULM Warhawk Invite.  In his second outing for his new College, Damian ran the 4 mile Cross Country Course in a fine 20:33 to win by six seconds.  After a long spell of injury trouble it looks like the persistent Damian is finally getting a break and getting into good shape.  Check out the race report and full results here. Putting the Ragin into Cajun!
Comments are closed.