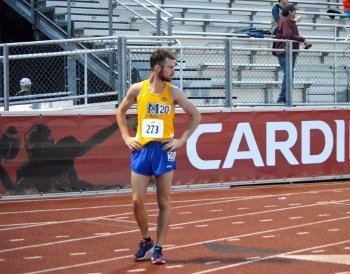 Continuing on his return to form this season Damian stepped onto the Track to Break yet another club record last weekend in San Antonio,Texas at the University of Incarnate Word (UIW), bringing his total to 3 on the year.

Right in the mist of Final Exams, the team made their way across the State Border from Louisiana into Texas for the Pinnacle event of the regular season in the Southland Conference.
With Competition scheduled to begin Friday morning inclement weather and thunderstorms put a hold to proceedings before ultimately cancelling all but one event, the 10,000m.

Damian one of the entries on the starlist for the gruelling 25 lap race, joined only two other McNeese men on the start line, Nathan Jones and Enrique Soto both currently qualifying for the NCAA Regional Championships in the event.

With an 8pm start, darkness had all but descended on the track for the start of the race which went out in typically slow championship fashion. A Breakaway group of approximately 10 athletes began to appear after about a kilometre and this continued to separate further into 2 groups with Jones and Soto trading off the lead at the front and Damian holding strong in the chasing group.

A well separated field after stringing itself out in the later kilometres entered the closing laps and saw Damian making strong moves into 6th place and continuing to close strong into the last lap where he looked to be pulling away to secure the 6th spot only to find himself in a foot race coming off the last bend into the home straight which he ultimately lost by little more than a second on the finish line to finish 7th overall in the race behind Jones in 2nd also losing out on the foot race and Soto in 5th. Damian has again set a new club mark of 31:52.36, breaking the record on the Track of 35:41 by Johny Lane in 2010 at the Galway T&F and smashing his own personal best set on the road in Sligo back in 2016 when he ran 32:32 curiously also losing in a foot race on that day over the last 200m.

However this wasn’t to be the end of the competition for these men on this weekend as they all toed the line for the 5000m event only two days later on Sunday afternoon joined by no less than 5 more McNeese distance men in the 53 man field for this race.
The race appeared to be unfolding in a similar fashion to that of the 10000m with Jones, Soto and O’Boyle coming through in a breakaway top 10 through the 3k mark, but what appeared to be a combination of both the 90°F Texas Heat and a weekend of long hard racing already in the legs, Damian and Nathan dropped back over the last 2 kilometres to both finish outside of the top 8 scoring positions for their team, but with Enrique stepping up and taking the lead to charge home to victory taking 1st place on the podium.

The Cowboys Struggled to secure some vital points on the closing day of the meet finishing them 4th overall in the team scoring after a difficult year.
The Regular season now comes to a close for minority of the Cowboys team with one final meet held at home this coming weekend in an attempt to secure some of the coveted Regional Qualifying Positions ahead of the Regional and National Meets this coming June.