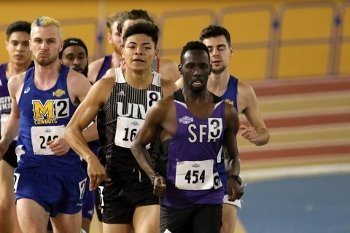 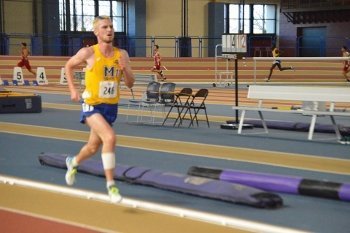 (Bandaged after being spiked in Mile earlier in day)

Last Week saw another successful trip to Birmingham Alabama for the Southland Conference Championships, where our Scholarship athlete Damian O Boyle competing with McNeese State University again represented his school over two separate events, the mile (1609m) and the 3000m.

Day one saw the prelims of many of the Championship events including the mile where Damian toed the line in Heat 1, battelling strongly for fourth place in his heat to qualify as the first fastest loser and fourth overall fastest into the final as the second McNeese man behind Junior Niall Holt and just ahead of fellow Irishman Luke Horgan of Leevale AC.

Day Two of the Championships saw the Finals in all remaining events where Damian lined up in the Nine Man Mile Final in the morning. The pace judgement and tactical strategy combined in this race proving too much to overcome the opposition on this occasion with Damian unfortunately taking the 9th and last spot on the finishing sheet, looking simply like a man that had just been out of the loop a bit too long.

Damian not being one to let one dark result affect him, turned around only two hours later to line up in the 3rd Heat of the 3000m where a very smart and judged race saw the Craughwell Native become the first man to break an official club record on US soil, by no less than 11 seconds in a time of 8:41.53, breaking his own record of 8:52.99 set all the way back in 2014, to finish a closing second place in his heat to rank a very commendable 10th place overall in the event, considering the top 16 men in conference were all in the 1st Heat!

The Cowboys finished as the 5th overall scored in the team event at these championships showing good signs of what’s to come ahead of the outdoor push with no less than five Seniors yet to join the team. This event concludes the indoor season for the McNeese Cowboys, who will open their outdoor Season in only 3 short weeks.

Special Mention to fellow Cowgirl and Irish Woman Grace McKenzie of Belgooly AC in Cork who not only broke the McNeese record for the pentathlon multi-events and won herself the Southland Conference Title, but is also currently on the bubble to qualify for the 2018 NCAA Division 1 National Championships, which would make her the first McNeese athlete to do so in 4 years! Best of luck to Grace and isn’t it great to see our Irish athletes doing so well in their athletic journey.

Coverage of the Events can be found at http://southlanddigitalnetwork.com/ in the ‘On Demand’ Tab