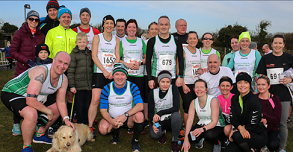 It is a race always marked in my race calendar although with two runners in house I do not always get to run with one of us minding the kids. This year both myself and Helena managed to run and with the great setup and well marshalled parking, it is very safe for kids playing when the event is on. It’s a great race regarding the distance and being the end of January to knock the remaining cobwebs off after the Xmas period. There was Great atmosphere on the day from the kids race, the registration in the hall, the start of race , finish and prize-giving and Tea drinking …a real family friendly event with the kids enjoying the school pitches and yard play areas. Mary Porter keeping the atmosphere exciting with her commentary on the race. It’s great to see that the money raised by the event and with fantastic local support they get in sponsorships making great improvements to the school’s facilities year on year . It was a cold day, temperature reading about 5 degrees but felt colder when warming up, I ran about 2.5km for warm-up and the Race started on good time. I had checked some of my previous year’s times earlier in week and my best was 29.12 in 2013 but closer to 30mins the last two times I ran. Being a local race, there was Loads of familiar faces at the start with plenty of Craughwell AC present again this year. The usual Bit of banter at start and then the pre-race nerves just before you get going as you are half-listening to the road marshall’s instructions. Start of race went out fast with everyone tending to go hard for first 200 metres until the pace settles , the change in direction of the route in recent years means the dreaded wind coming back on main road is gone and I think it’s a much safer option on the main road going out first. My last few races, Athenry 10km and resolution run I tended to be running on my own and struggled to keep pace so I wanted to try keep beside nearest person for this race. I stayed along with Laura porter for first mile and drifted ahead with another runner to the 2nd mile, The roads were mud splattered from the local farming activities adding to the local rural ambience of the race but the footing underfoot was fine. The bends in the road mean you don’t see too far in front at any point and plenty of farmhouses and sights to be seen as you make your way. I Passed a few runners at that point and the downhill sections were a welcome break on the legs and I was happy with my pace at that stage, the coldness had gone and I was actually feeling too hot with the light under armour , I just passed 3 mile marker at 21 mins 15 seconds but was running now on my own , Declan O’leary from the club passed me at speed and I began to dig deep for a few moments but decided not to try follow and just try keep my own pace, Pat Callanan came alongside shortly then who had been sitting behind for a while so I tried keep pace for last mile alongside him, managed to keep pace until last 300m when all the steam ran out , I think mentally when you reach the school you feel you have arrived but you still have a good 400m to go. I lost a good few seconds pace wise in those last 300m as one runner passed me with a sprint finish, I could see I wouldn’t be passed again and just jogged it in ( in hindsight I should have went for it for a better PB). I passed the clock at 28.57 in 28th position, a PB for Coldwood … which I wasn’t expecting but the recent speedwork and quality sessions with great running buddies on Tuesdays at the 400m track obviously paying dividends. At the new finish line, you get to see the runners run in the last loop on the track around the pitch so I was able to cheer the other club members in their last few metres, from the club I saw Ollie Niland with a super run , then Mark Campbell ,Laura Porter and Dean Roche just in behind and not long after that Catriona Leen , 3rd lady from Craughwell in after sisters Linda and Laura Porter, Caitriona has had always a strong run on her home turf, followed in by mere seconds by Treasa Callanan and then Aideen Gillespie having a great battle with James Lundon earning herself a big PB by more than a minute. Paul Miskella back in flying form with a strong finish and a similar very strong finish by Colm McAllen whom blitzed the last loop of the track. Helena had a huge PB finishing in 35.16 , 4 minutes faster than last year, consistent running with Fit4Life continuous running sessions on Mondays and Thursdays now showing. The rest of the Craughwell AC members all seemed to finish strong and comfortable with PBs for this distance by Dean Roche , Ollie Niland , Colm McAllen and Jaco Daniels. All the results can be seen on redtagtiming website. First in from Craughwell, Damien Larkin was in fifth overall position and a strong run from tom Tuohy earned him a 12th position .A fantastic run from Linda Porter earning herself First Lady home with a good battle with the impressive Cliona Hurst, now a regular visitor at the event. There was the usual great spread of food and tea afterwards and a very warm welcome and thanks from all the Organisers. There was plenty of Marshall’s posted at all junctions and a few supporters bracing the cold to cheer us on. Spot prizes for runners were also given out which is a really nice touch. Well done to all the organisers and helpers, we will be back next year.