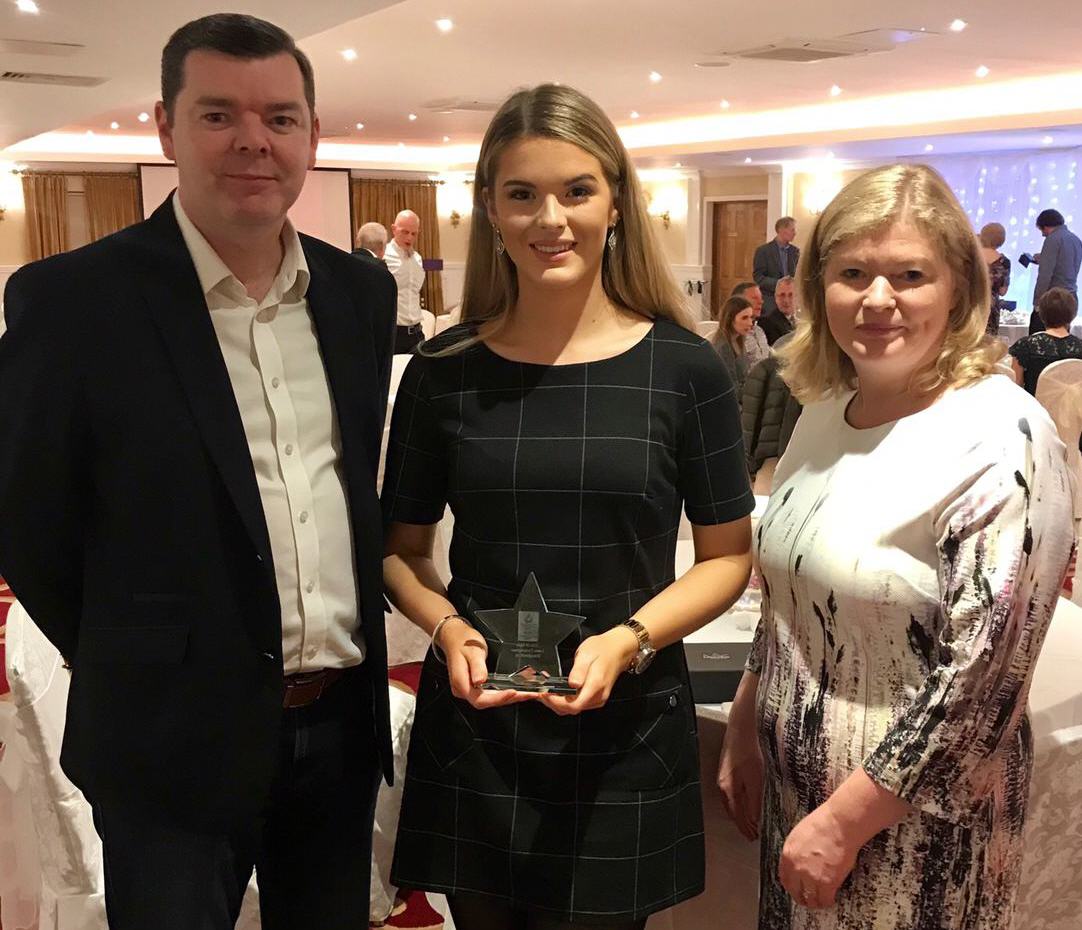 Congratulations to Craughwell AC’s Laura Cunningham who was awarded Galway U19 Athlete of the Year at the County Galway Athletics Awards ceremony held in the Meadowcourt at the weekend. The award marks an outstanding 2018 for Laura with 3 jumps medals in the National Juvenile Indoors in high jump, long jump and triple jump as well as 4x200m relay silver and she followed this up with the National outdoor title in the U19 Triple Jump as well 4th place in high jump and long jump and National relay medals in the U19 4x100m, U19 4x400m and U20 4x100m, an outstanding year by any standards.

Check out John O’Connor’s excellent photos of the event at:- https://www.flickr.com/photos/edenhill77

Laura had an incredible 2018 with no less than seven National medals in the U19 grade at the National indoor and outdoor track and field finals. The indoor season saw her take a brace of silver medals with a 10.38m leap in the triple jump and a 1.55m clearance in the high jump, as well as a bronze in the long jump with a 4.87m leap. She copper-fastened a remarkable indoors when anchoring her club 4x200m relay team to National silver in an excellent 1.47.85. Earlier in the season, she had two 4th placed finishes at National level with 4th in the U20 Combined Events and in the U20 high jump. She was also a leading member of the Craughwell Womens team who won team bronze in the National Indoor League.

The outdoor season saw no let-up in Laura’s top-drawer performances culminating with winning the National U19 Girls Triple Jump title with a leap of 10.58m and two 4th placed finishes in the long jump and high jump. And for good measure, Laura ran the anchor leg for both the club’s 4x400m and 4x100m relay teams, winning silver in the 4x400m and bronze in the 4x100m.

Laura also set a new Galway Indoor Championship Best of 10.02 in the senior women’s triple jump and she continued this form into the outdoor season when repeating this achievement with a 10.90m leap in the U19 triple jump at the Galway Outdoors and added a CBP in the long jump with a 5.02m leap. She won numerous Galway and Connacht titles both indoors and outdoors as well as quadruple Connacht outdoor titles in triple jump, long jump, high jump and relay.

She was also the leading member of the club’s U20 Womens team who were the top club at the National U20 Track & Field Championships, thereby qualifying for the European Clubs Track & Field this year. Laura contested 5 events and the 4x100m relay, placing 4th in the high jump and javelin where she threw an impressive 26.07m and anchoring the relay to the bronze medals. Her willingness to push herself to her physical limits by competing in 7 different events was inspirational for her team.

Laura’s achievements in 2018 are remarkable, particularly winning 7 National track and field medals in the same age group – a rare and perhaps unique achievement in Co. Galway and one that makes her a very worthy recipient of Galway Athlete of the Year.