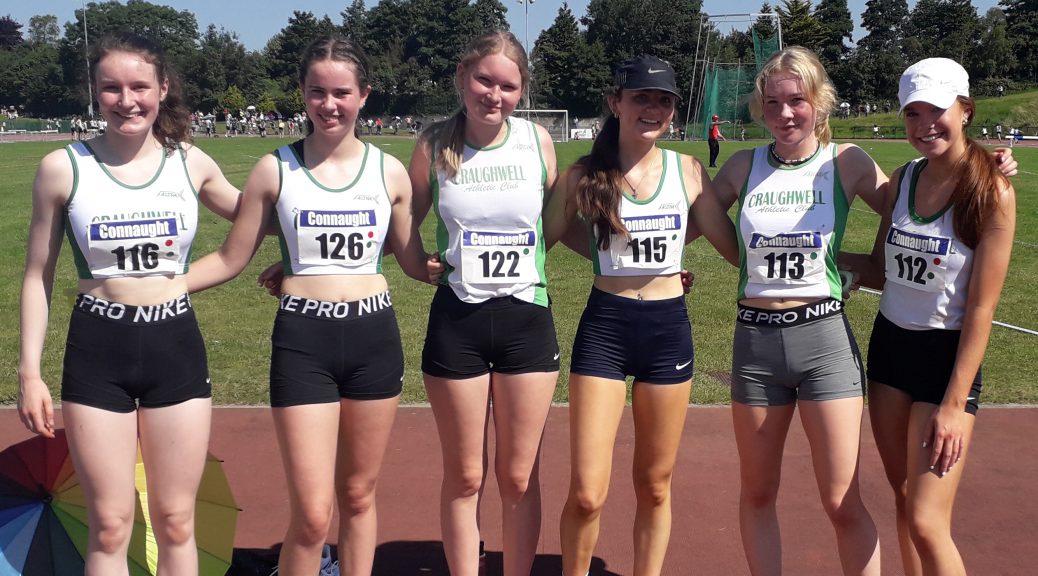 Summer hit with a bang today in Athlone as Connachts Day 1 took place in scorching, sweltering conditions. Despite the blazing sun, the Craughwell AC kids did themselves and their club proud with many superb performances and several qualifiers in all Age Groups.

A riveting U17 boys triple jump event saw the club take 1-2-3 with Evan Quinn taking victory with 10.79m with Evan Hallinan in silver position just 13cm behind with 10.66m and Andrew Power taking bronze just another 19cm behind with 10.47m.

The U17 girls achieved a similar feat in the high jump with Jade Moorhead soaring to the title with 1.61m, Siofra Davis taking silver with 1.45m and Erin Kelly and Leonore Church sharing bronze with 1.40m. Erin went on to record a brilliant 9.46m PB to take gold in the triple jump with Aoibhe Fahy taking bronze with 7.79m. And Siofra Davis hit over 30cm of a PB with a 4.82m leap to take silver in the U17 long jump with Erin Kelly 5th with 4.50m, Leonore Church 6th with 4.36m and Aoibhe Fahy 7th with 3.80m.

Lukas Schukat took a brace of medals in the U18s jumps, taking gold in the high jump with a safe 1.60m and in the triple jump with an equally safe 8.66m, carefully minding an injury that he hopes to have recovered from for the Nationals. Evan Hallinan likewise held back in the U17 Boys high jump due to a recent injury, jumping 1.55m to take silver and later leaped an impressive 5.70m to take silver in the long jump. Evan Quinn took bronze in the long jump with 5.20m with Andrew Power 4th in 4.98m.

In the U16 grade Sean Liston took silver in the high jump with a 1.55m leap and placed 5th in the long jump with 4.43m. Grace Keaveney put in a powerful leap of 4.68m to claim the Connacht title in the U16 Girls long jump on her final attempt – having broken her 2 earlier attempts which put her under some pressure on the final attempt, a great performance and a PB by 1cm ahead of her 4.67 in last August’s Connacht Games. Holly Shaughnessy took bronze with a leap of 3.85m and earlier did likewise in the high jump with a super 1.25 leap. Adara Salvo took gold in the U16 Girls triple jump with a best of 7.43, particularly brave jumping from Adara as she had only switched from the 5m board to the 7m board for the first time in this competition.

The U14s had some tremendous jumps also – particular Conor Penney’s leap of 1.65m to take the Connacht high jump title and SMASH the Connacht Championship best performance by 7cm.

Keelan Moorhead got an exceptional PB of 1.45 in the same event to take the silver. Emma O’Donovan strung a brilliant series of jumps together to take the Connacht title at 1.35m.

Sean Hoade jumped an incredible 5.10 to take the Connacht title in the long jump, setting a new Championship Best in the process. Dean McNally took silver with an impressive 4.54, with Donnacha Lawless 8th with 4.17. Lauren Kilduff, Irene O’Brien, Emma O’Donovan placed 7th, 8th and 10th in the U14 Girls long jump with bests of 4.25, 4.24 and 4.16.

Endurance in the Sun!

Though the heat was ideal for jumping – the same couldn’t be said for the distance events! Even the warm-up was HARD work!!

Oisin Davis was hoping for an easier run but did what he had to to win the u19 Boys 800m in a time of 2.03. Oisin had to fend off a couple of surges from classy u18 athlete William McDonnell of GCH but just about managed to get his chest over the line first.

Emily Miskella found the heat heavy going and just couldn’t get into her 800m race. She finished 4th in a respectable 2.31, well off her pb but a strong run in the conditions.

Ross McGuinness ran very nicely in the heat to win a torrid u18 Boys 3000m in 9:45.16. Though well off a PB, it was a fine run from Ross in the conditions. Mathys Bocquet found the heat tough going but held on well to take 3rd and qualify for the all-Irelands. This was also a great achievement from Mathys who is still building back after breaking his femur this year in a cycling accident.

Sprint Success: Farrelly and Hoade to the fore

The talented Ella Farrelly topped up her amazing Long jump with a dominant 100m win in 13.31.

The u14s had a great day in the sprints with a highlight being the fantastic battle over the 75mh between Sean Hoade and Connor Penny. Sean just grazed the win with a superb 12.16 on this occasion – a championship record!!

Donnacha Lawless taking Silver with a superb 10.68 at the 80m. Cian Brady was not far behind, taking second in his heat in 11.07 for 4th overall.

Aoibhe Fahy won the u17 girls Javelin with a strong throw of 26.7m.

Great Day for the Irish!!

While all the action was going on in Athlone, over in Estonia one of the greatest ever days for Irish Athletics was taking shape!! I took shelter for the big races in the tree and had the best possible company while watching the stream – the legendary Paddy McPhillips, a tireless servant of Longford and Connacht Athletics who was there to watch his Daughter compete settled down like the rest of us to watch his son Cian’s marvelous victory on the stream. And what a victory!

Cian has deservedly earned the heavy mantle of “the future” of Irish distance running, but he now has company holding that burden of expectation in the equally sensational Nick Griggs who lit up the stream afterwards in a 3000m performance like none I have seen in years. The two lads and the incredible superstar Rhasidat really put Ireland on the map yesterday!! What a time to be an Irish Athletics fan!!