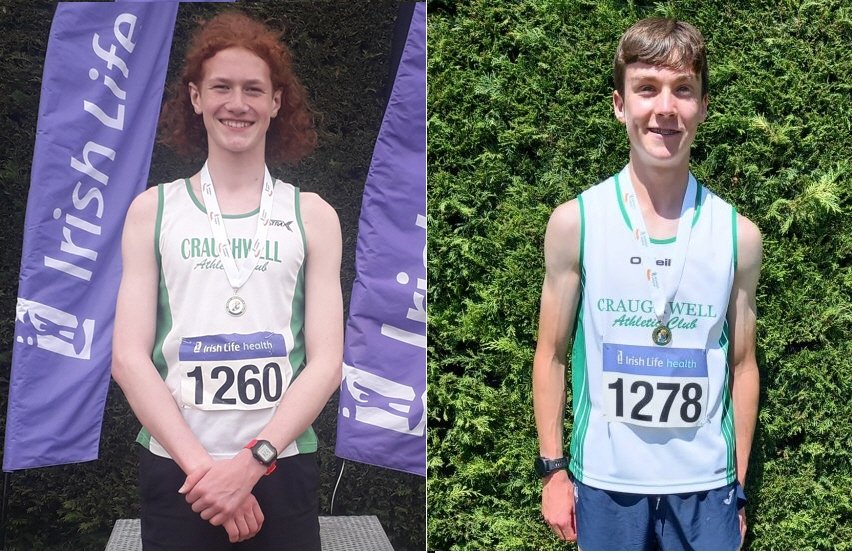 Congratulations to Conor Penney and Declan O’Connell on their selection for the Irish team going to the England U15/17 AAA Championships at the end of August!

The AAAs are widely regarded as the top open Championships on these islands and are notoriously difficult to qualify for with only a handful of our athletes ever achieving the standard including Anne Loughnane (U20 race walk), Cathriona Farrell (U15/17/20 high jump), Aidan Conneely (U15 sprints), Laura Cunningham (U17 triple jump), Jerry Keary (U20 High Jump), Evan Hallinan (U20 high jump) and Jade Moorhead (U20 high jump).

While several more achieved the standard, Aidan Conneely was the only other athlete from the club to compete in the AAAs, competing in the U15 Indoors in Birmingham in 2012 where he recorded a PB of 7.77 in the 60m sprint.

Declan’s qualification was achieved at the National U15 Championships this year in Tullamore when he raced to a blistering time of 4:19.58 to take the National U15 1500m title comfortably inside the 4:30 standard.

Conor achieved the standard on a few occasions, most notably with his Championship Best Performance of 1.88m to take the National U15 title in Tullamore, having earlier done 1.84m at the Connacht’s and 1.81m in the National Indoor Pentathlon early this year – comfortably over the 1.70m standard. In fact Conor has been over the standard in most if not all of his competitions this year and will also be in the U15 age group next year for UK competitions as they have a different age cutoff date to that in Ireland.

The best of luck from the club to both athletes on their trip to Bedford UK at the end of this month!