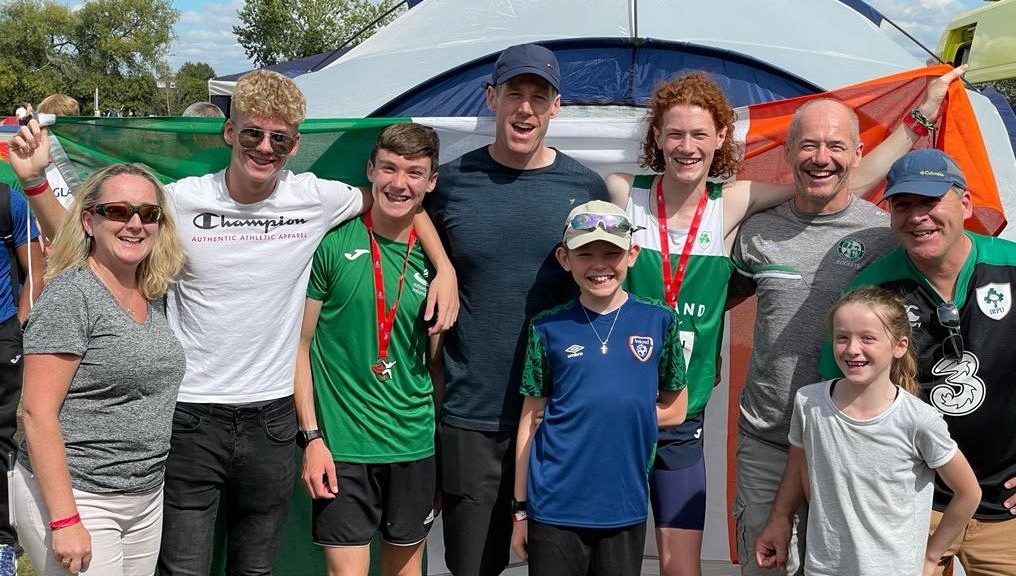 The English U15 and U17 Athletics Championships took place this weekend in the beautiful town of Bedford just north of London. This year, Athletics Ireland decided to enter a team of Irish Athletes to compete and selected the best in the country from the recent National Championships.  From Craughwell AC, Irish Champion Declan O’Connell was selected in the 1500m and Irish Champion Conor Penney was selected in the High Jump.

British Athletics is on a massive high at the moment and is probably the strongest nation in the world when it comes to middle distance running.  Declan’s race was a straight final on Saturday, and the field was stacked.  Declan is known for his front-running style, but the quality of the field was such that he hung off the pack in last for the first two laps.  In the third lap he gradually worked his way up the field to 5th at the bell, with the front group of three a long way clear.  Declan kept running strongly and eventually the gap closed and with 60m to go he worked his way into a marvellous Bronze medal position, and a huge personal best of 4:15.90. This is a top-class time for an U15, definitely the fastest ever in the club and with the tactical nature of the race he is definitely capable of going even faster (the lad in 4th had a 4:08 pb coming into the race).

On Sunday it was Conor Penney’s turn.  Conor started at 1.68m and worked his way up to 1.82m, which he knocked on the first attempt.  At this stage there were only two left in the competition and his competitor cleared 1.82m to put Conor under pressure.

Conor calmly cleared 1.82 on his next leap and followed it up with a 1.85m on his first attempt, a height his opponent failed to clear.  Another fantastic Gold for Conor to cap off an incredible season!

It is an incredible achievement to win medals in England. In fact it’s more than England as Athletes from Scotland and Wales were also in attendance so the competition came from a potential population of 70 million or more. If you consider that the population of Craughwell itself is 769 (as of last census, though of course we also service the surrounding townlands), the odds that athletes from the club could take not one but TWO medals is insane, and a huge credit to the coaching team of Ronnie Warde, Brendan Penney, Evan Morgan and Michael Tobin.