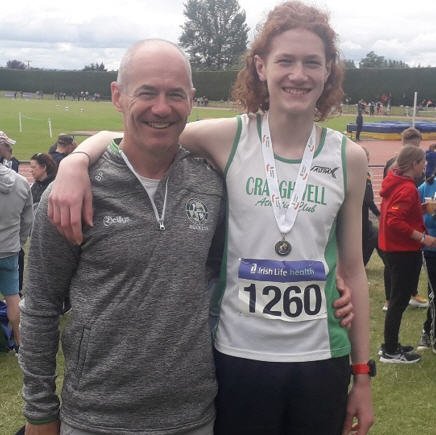 Massive congratulations to Conor Penney who was announced last week as the recipient of the Athletics Ireland Juvenile Star Award for County Galway for 2022. Conor is pictured above with his dad Brendan following his National record in the U15 high jump in July.

These awards are almost impossible to win, with the most successful Galway juvenile athlete (male or female, U14 upwards) in AAI competitions been picked based on medals won at National level.

Athletes from the club have won the award on 3 occasions in the past with Cathriona Farrell winning it in 2008, Sinead Treacy in 2015 and Laura Cunningham in 2018. Conor becomes the first male athlete from the club to win the award, an outstanding achievement

Conor joined the club as an U11 in the Autumn of 2018 and in the following indoor season, Conor’s exceptional talent for high jump was immediately apparent when he leaped 1.35m to take the silver medal at the National finals. He got off to a rocky start that day as you can see from the jumps record below!

The outdoor season didn’t go quite as well that year with a 7th place finish in the National finals with a jump of 1.25m. The pandemic then got in the way of further success with the 2020 indoor season cancelled prior to the All-Irelands and the same fate befalling the outdoor season. 2021 also saw the indoor season cancelled so it was only summer 2021 that Conor got to compete again at National level. By now, Conor had added another string to his bow with the sprint hurdles under the expert tutelage of Ronnie Warde and he proceeded to take double gold in the U14 High Jump with a best of 1.66m and in the 75m Hurdles in a time of 12.04.

Similar success followed in 2022 with double gold in the indoor season in the U15 Boys High Jump with a clearance of 1.74m and in the 60m Hurdles in 9.33. And history repeated itself yet again in the outdoor season where Conor raced to victory in the 80m Hurdles in 12.34 and leaped a Championship Best of 1.88m to claim the U15 High Jump title, as well as adding bronze in the 250m Hurdles for good measure. His 1.88m leap is an all-time Connacht record for that age group! Conor was also a key part of the club’s 4×100 U15 team which won the National title in the outdoors.

And August saw possibly his biggest achievement of all when battled against the best in Britain to take the English AAA U15 High Jump title with a brilliant leap of 1.85m. All the more impressive given that Conor has actually another year in that grade for UK competition!

And pictures of our previous award winners below that captures the moment.