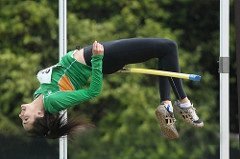 The County Junior/Senior/Masters Championships were held over two very pleasant, balmy days in June recently, and saw a strong Craughwell presence across the three categories. The weather merely reflected the fantastic, friendly atmosphere between competitors – if you haven’t gone to these events before, it is well worth checking out next year. Nobody takes themselves – or the competitive aspect – too seriously, and there is a support and encouragement for all competitors from both fellow-athletes and officials. It’s always good to see the club’s top young performers support their county championship – and Craughwell were exemplary in this regard, with the likes of Cathriona Farrell, Conor Duggan, Damian O’Boyle, Aidan Conneely and Peadar Harvey all turning in star performances. Not only do Craughwell athletes get to watch and applaud their own club’s efforts, but also those of other clubs – for instance, new GCH star, Aubree Piepmeier and Athenry’s Jane-Anne Meehan in the 5k and perennial multi-event winner Mary Barrett.

By far the largest entry (a huge field of 29 men plus the 2 aforementioned Women) on the opening Tuesday night assembled for the 5k race on Tuesday night, where our own Damian O’Boyle really turned on the style to lead home in a superb 15:41, with Peter O’Sullivan impressive in his slipstream, while Peadar Harvey ran a very solid race over the longer distance to just pip Ollie Mullins, who was the first Masters athlete to finish. That made it a 1-2-3-4 in the 5k, with 1sts in each age-band, a testimony to the club’s strength across a wide age-range.

Michael Walsh finished a commendable 3rd of many Masters over 50s athletes in a very good 18:50.

Dearbhaile Walsh ran a very strong 3000m earlier to win in 12:20.00, underpinning her real potential in the distance events and rewarding her impressive dedication.

In field events, before she went and won the Senior Shot Putt, our own Sarah Finnegan not only officiated but also won the Triple Jump with superb technique and a best of 9.77m.  Sarah picked up multiple medals (6 or 7 by my reckoning) with very fine performances across the 2 days and exemplified the spirit of the event by competing and officiating in equal measure.

Seamus Lynch was 2nd of both Seniors and Masters behind Athenry’s impressive 49 year-old Bob Bailey in the Men’s Triple Jump.

On Sunday, it was great to see Cathriona Farrell at her best with 1.75m in the High Jump, while Conor Duggan – just before sealing his place on the Irish relay squad – lit up the track with yet another scintillating sprint double.  His 100m time of 11.05 is one of the best ever 100m runs by a Galway athlete. The same can be said of his 200m time of 22.80, where Rob Hogan hugely impressed as the first Senior past the post in 27.10.

Sinead Treacy was further evidence of Craughwell’s incredible sprint talent when winning her 100m in 12.79 ahead of Sarah Finnegan, who was the first Senior home. Sinead completed the sprint double with a fast 200m time of 25.87; she was pushed by guest athlete Louise Holmes of Kilkenny City Harriers. The guest athletes from outside the county is another nice feature of these events, and here, Sinead was given a better run-out due to the KCH athlete’s decision to enter.

In the Women’s 400m, Rachel Finegan was first Senior and Dearbhaile Walsh 2nd in Junior – both with times not far from the magic 1 minute mark. 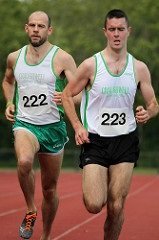 Peadar Harvey’s 800m victory was in perhaps one of the day’s most exciting races, where his fine 2:02.02 pipped GCH’s excellent Conor O’Rourke in the Senior section. This was matched by Dearbhaile Walsh’s star turn in winning the Women’s equaivalent by a clear 40 second margin. All the more impressive given that Dearbhaile had also done the 400m that day.

The Men’s 1500m was another exhilarating display of middle distance running from the irrepressible Peter O’Sullivan and clubmate Jason Broderick who scored a fine 1-2 for Craughwell.

Rob Hogan did something few athletes do, which is to win medals in the shortest AND the longest race of the day! His 2nd place in the Senior 10,000m was on the back of an excellent 100m run earlier. The first two runners home here were the aforementioned Peter O’Sullivan, who completed his own fantastic distance double on the same day, with 35:44. Ollie Mullins was next and first Masters over 35 on 36:52.

To cap the Men’s track events off nicely, the Craughwell 4 x 100m team was 7 seconds clear to win the Relay.

In Field Events, Aidan Conneely showed his quality in leaping 6.09m to win the Long Jump, far more than a metre ahead of the first Senior athlete. This was just one of a series of exceptional outings for Aidan in a great year for him, culminating in his success at the All-Irelands a few weeks later.

Sinead Treacy and Sarah Finnegan served another 1-2 as Top Junior and Top Senior in the Women’s Long Jump. Again, both athletes have had a super year in their respective endeavours. Sarah was also a fine 2nd place behind Cathriona Farrell in the Women’s High Jump, demonstrating her all-round ability across multi-events.

All round, a superb 2 days of competition that highlighted the talent in the county old and young, but also showcased the goodwill, fun and friendships that clearly bind our county’s clubs & their athletes.

Apologies for any inaccuracies or if anyone’s name is missing from the above report…full details are courtesy of Athenry AC @: