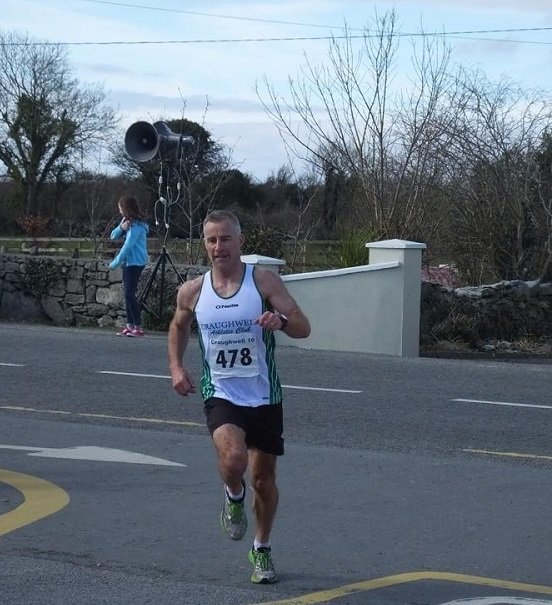 So, here I was at the start line of my first Craughwell 10 wearing a Craughwell AC singlet, but a complete stranger-almost. Having only joined the club 3 weeks ago I hoped this would be a successful homecoming. I hoped the Garmin would locate a satellite before the gun in 2 minutes!
Lots of guns here today, Raheny, Tullamore, Limerick, Mullingar, Roscommon, Templemore more Raheny… but this is my backyard. Galway’s’ finest are on show today. From Athenry-Rohan, Meehan, Healy, Somers, Deakin, from Maree, Mc Donagh, Kerrin from G.C.H. Bidwell, Brody, Carty, Phelan and some heavy local artillery in the form of Larkin and Mullins.

Two hours earlier at number collection I didn’t have to introduce myself as the lady issuing the numbers recognised me. It turns out Mairead Lane and I shared the same school bus when I did the leaving cert in ’87. Mairead must have been in 1st year! So at least one person in a Craughwell singlet knows who I am! Having worked all morning in administration Mairead went on to post a superb 1hr 29mins.

BANG! We’re off. I have a plan… run with my head and ignore the Garmin for the most part. Nobody is overtaking me in the first 500yards, that’s because I’m moving too quickly and need to slow it up. Where’s the plan now? I have overtaken quite a few and decide to sit it in, albeit 20yds behind my friend Brendan Mc Donnell. Brendan finished the Kinvara half two minutes ahead of me a fortnight ago, I won’t see him for long. A young lad shoots past, down the centre of the road and continues at an electric pace. It was Oliver Mullins- he quickly fades in the distance.

Mile 1 complete 5’52”- not good, what am I doing? I’m 46 and with only two years running under my belt even I realise that this is far from intelligent running. So I pull in the horns. Mile two is flat and I decide to ignore the Garmin, reduce the effort and the pace, no overtakes 6’15”. Two down and I can look forward to a drink soon.

The headwind is cooling though, just need to rinse the mouth. The runner behind me is starting to pound the tarmac, I can’t live with this, two choices, no – one, he’s not getting past…I squeeze the throttle. His noisy footfall fades. The three mile marker 6’04”. Ah, the water station, all is good again, or is it? I try to take a drink but nearly choke. I’m moving too fast again and my mouth is for breathing, not drinking this time. We turn right for Roveagh and the breeze is no longer in our faces, found a comfortable pace now. Brendan is not really increasing the distance between us. I admire the scenery-almost 30 years since I travelled these roads. I’m moving well.6’13” for mile four.

The fine day means there are people at almost every gateway encouraging all the runners. They were there for the first four miles too but didn’t get the appreciation they deserved as I was trying to referee a conflict between my head and my heart. Mile five has a gentle incline and I pass a runner whose game is clearly up! He wishes me well as I pass, he’ll be back. I’m now starting to appreciate the advantages of being a club member running on home ground as cheers of “C’mon Craughwell”, “Good man yourself” and “Fair play to ya” ring in my ears at every gateway. 6’14” for mile five and so far so good. We soon take another right turn and the initial breeze in our faces is now on our backs. Brendan is not stretching his lead over me but is actually within touching distance. He looks over his shoulder for the first time. He sensed it was me gaining on him, “I’m cattle trucked Tom” or similar sounding words came from his mouth. I pass my friend, tell him to tuck in and I’ll take him to the finish. I’m 5’8″ -he’s 6’4″! He ordered me to “GO”- I did- mile six – 6’03”

I was moving well, legs were strong my breathing controlled. Mile seven has a hill, I like hills, and a water station. Brendan recedes behind me as I recognise the runner 200yds ahead-Jane Ann Healy. My only other race over the distance was the Galway Simon 10 last summer -I finished in 1:06:20 with Jane Ann 40 seconds ahead in 3rd place overall. I’d settle for that today but had a goal time of 1:05 for Craughwell. I wouldn’t be checking my overall progress till race end. Mile seven 6 minutes flat.

Three miles from home and I was enjoying this. I managed to take on water during mile 7 and keep the pace. I managed a wave or two and a few “Thank you’s” to the many encouraging well-wishers along these last few miles. This Craughwell singlet is making me run faster and stronger-I’m flying now. As I near the right hander just before the eight mile mark there’s a shout “C’mon Tom, you’re flying”. It was the endorsement I needed, it was my old school class mate and Craughwell A.C. stalwart John Fitzpatrick.

I put mile eight aside in 5’54”. Keep it cool now, don’t blow up 2 from home. Jane Ann wasn’t getting any closer… she was gliding along gracefully. All quiet in the rear-view mirror! There’s a downhill section in mile nine and halfway down we take the only left hand turn onto the long home straight. There are lots of cheering onlookers now and I’m feeding off them 6’02” for mile nine.

And now one last effort, stay focused and finish strong but carry on enjoying the moment. I don’t think the next runner is close enough to challenge my position in the field and I know I have got the fuel reserves spot on. I’ll empty the tank now and float over the line. 200 yards to go and I disengage cruise control and fully open the throttle.

A marshal shouts my bib number ahead and the P.A. announcer is on the wrong page …declaring “Next home is… (ladies name) from Ballyhaunis meet and train”. The large crowd near the finish had such a laugh at the ugliest woman they ever saw running! I managed a smile and lifted my vest to expose a hairy belly for them, proof enough that she had made a wrong call. There quickly followed a correction and an apology over the P.A. system with the announcer rectifying her mistake declaring aloud that number 478 was in fact a MAN, me, TOM PRENDERGAST OF CRAUGHWELL A.C. 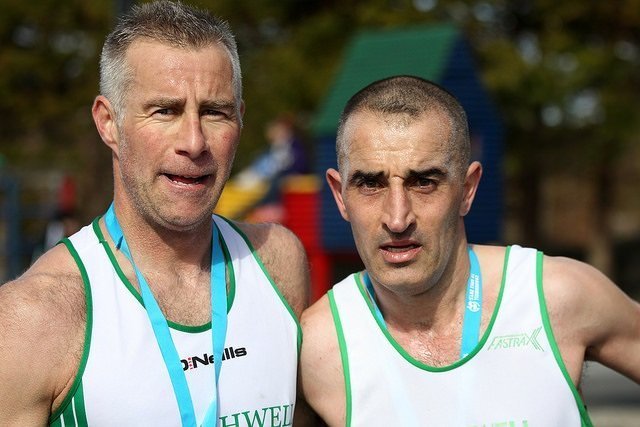 As I completed mile 10 in 5’57”, I glanced contentedly at the clock overhead 1 hr 0mins 55 seconds. A 5 minute PB. I had absolutely no idea that I had such a time in me, but have since realised that the time was always there. It just took every man, woman and child along the route to draw it out of my willing legs and lungs, for that I shall be eternally grateful to everybody who made it for me, the race of a lifetime and for instilling so much pride in me through the club colours!

What a day! What a club! What a brilliant organisation. To the volunteers who probably outnumbered the runners “take a bow “and thank you,