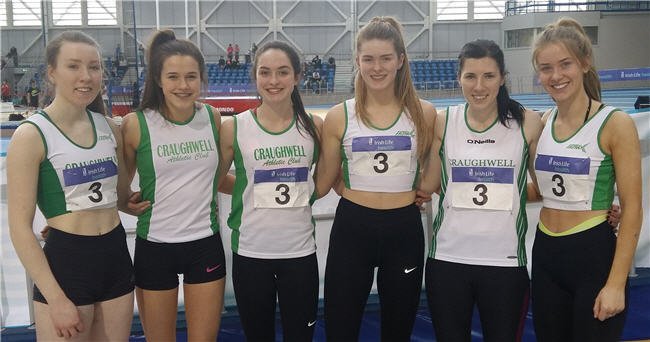 The National League is the preeminent club competition in Ireland where seniors and juveniles aged u17 or older compete for their clubs, scoring points for their team based on their placing in each individual event. It comprises two rounds with the top placed teams progressing to the final. Craughwell AC has fielded a team in the event since its inception a few years, managed by Sarah Finnegan. Last year the team (pictured below) placed 8th in the final.

Round 1 this year saw some excellent performances from the team with Sinéad Treacy taking 2nd place in the long jump with a leap of 5.12m and placing 5th in the 60m sprint in 7.98, Sinéad Gaffney 4th in the 800m in 2.22.62, Eva Kelly 5th in the shot putt with 6.75m and Sarah Finnegan 6th in the 60m hurdles in 11.07. Special thanks to Eva Kelly who lined out in the shot putt at short notice to score valuable points for the club.

Round 2 takes place in Athlone IT on 27th January with the events being contested including 200m, 400m, 1500m, high jump and triple jump with guests permitted and in addition a guest 800m and 3000m. The club hope to have a strong team out in round 2 and hopefully progress to the final which will be held in Dublin on 3rd February.