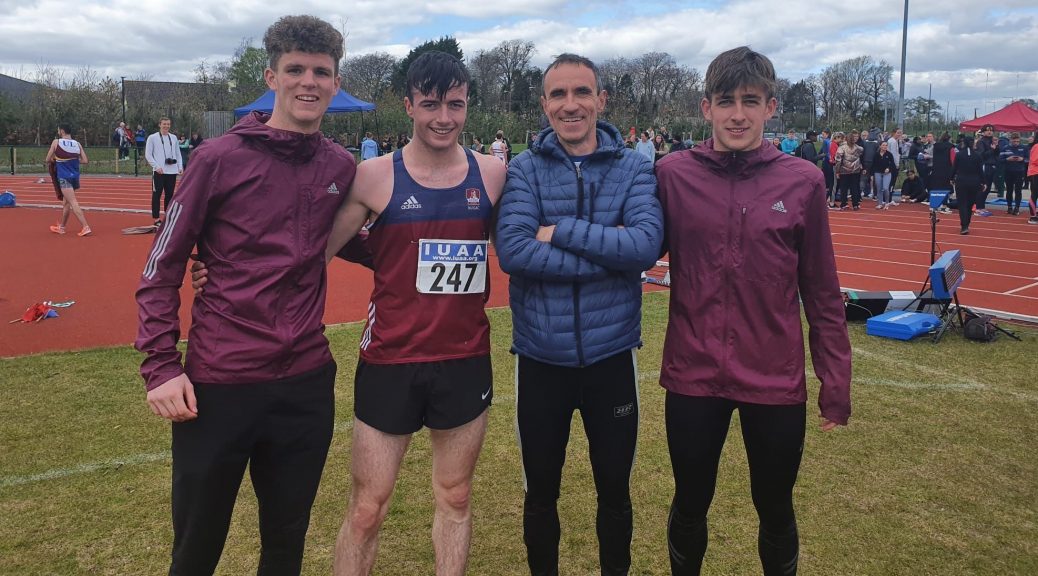 On Saturday, the finals of the Intervarsity Track and field took place and we saw some absolutely incredible results from Craughwell AC Athletes.

Sinéad Treacy on her “one year down” finished her fantastic IUAA career for NUIG on a massive high with a superb victory in the 400m in a brilliant new Club Record time of 56.15, knocking a huge chunk off her 2021 mark!!  We are all so thrilled for and proud of Sinéad!

Caron Ryan has had a hard few years with injury but looked healthy and strong as she blazed home in 3rd place to win a bronze representing Trinity College Dublin, running 10:42.  She has the air of someone rediscovering her love of running and very excited to see what this year brings for Caron!

Kyle Moorhead qualified comfortably for the finals of the 800m with a 2:01.64 outing.  Kyle stepped it up a notch in the final to run a superb 1.55.93 to win national varsity Bronze.  The race had a very similar feel to the u23 race in the indoors, with the same three lads breaking away to battle it out for top spots in very similar times.

U23 1500m champion Patrick Noonan decided to take on the 3000m steeplechase this weekend and he looked strong and comfortable over the barriers in the famously tough event.  Even by the last water jump, Patrick still looked smoooth and controlled and didn’t have the “this event has stolen my soul” look that is common in first time steeplers! Patrick finished 3rd in his debut race with an incredible time of 9:30.27.  This time knocked a whopping 23s off the club record of 9:53 set by US Collegiate Damian O’Boyle earlier this year and is also an NUIG record.  Not a bad debut!!

U20 Seán Cotter lined up in the 5000m in a stacked field of 20 athletes which included no less than FOUR u23 medallists from December’s European cross country.  The race started slowly, passing 2km in 6:20 – Sean tracked eventual race winner Thomas Devaney for much of the race as it wound up.  In the end, Seán finished 5th in a fantastic finish to end with 15:08.41, just 4s off Jamie Fallon’s u20 Club record.

Laura Cunningham (UL) and Leanagh Gilligan (TUS Athlone) scored well in the triple Jump clearing distances of 10.31m and 10.04m respectively. Laura was a narrow 4th and was very unlucky not to score in a phenomenally high standard competition.

It’s a hard life being in University Track and Field and the guys had to unwind after in the Sauna and at the Varsity banquet!! Happy days!! It’s a great time to be an athletics student, or a parent of an athletics student and full credit to all the college coordinators and coaches all around the country who give their time to work with athletes and club coaches and help support this great addition to college life.