Day 2 of the Galway Senior League took place last Thursday evening with some super performances and great team spirit amongst the Craughwell AC men and women leading to a series of victories and top 8 finishes to put the team into a commanding lead of over 30 points ahead of second-placed GCH and third-placed Castlegar AC. Craughwell AC took victory in no less than 10 of the 22 events held on the day and second place in 6 of those events giving it an unassailable lead on the day.

Dearbhaile Walshe and Catherine Noonan were next into action where they had strong runs in the women’s 3000m taking 2nd and 3rd places overall in times of 12:04.90 and 12:29.78, and 1st and 2nd juniors home. William Fitzgerald had a fine run in the senior men’s 5000m to claim 4th place overall and 1st junior in a time of 16:04.67. The jet-lagged Damian O’Boyle ran a solid 16:34.70 to take 5th place overall – clearly tired from his recent transatlantic travels and also despite the warm Irish summer, still acclimatising to our lower temperatures when compared to the sunny southern state of Louisiana. 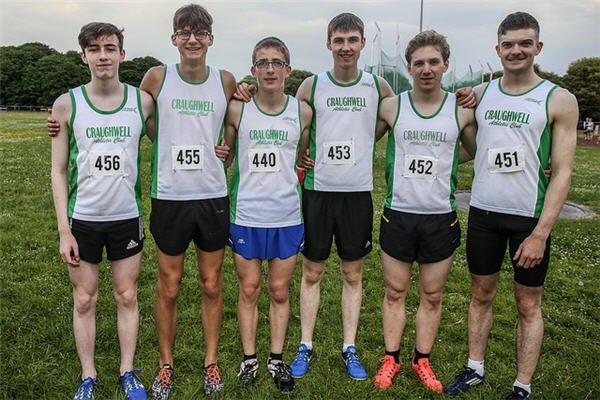 The senior men’s 800m threw up one of the highlights of the evening with a closely fought battle at the front between GCH’s Neil Keane and Craughwell’s Gavin Cooney and Jack Miskella with Gavin and Jack having to settle for 2nd and 3rd place in a tight finish in times of 2.03.90 and 2.04.37 and John Cormican recording a season’s best of 2.07.48. Luke Evans took 2nd place in the junior men’s 800m and 4th place overall in 2.07.39 nipping John Cormican on the line. Luke and John were followed closely by Patrick Noonan in 2.08.64 and by Finbar McFadden in 2.14.36.

The track events were wrapped up with the highlight event of the evening with the 4x100m and 4x400m relays. The women’s 4x100m got away first where the club had 2 strong teams in action with Sinéad Gaffney handing off to Sinéad Treacy to Orla Ryan to Katie O’Donoghue and Sarah Finnegan handing off to Laura Cunningham to Lorraine Delaney to Arlene Earls. Both teams ran superbly with both in contention as they rounded the final bend and Katie taking the baton in the lead and holding off a fast finishing NUIG team to claim the Galway title and Arlene battling hard down the home straight to take third place. The teams’ times were exceptional with 51.64 and 52.14 – both just marginally outside the club record of 51.49 set by our U18 National Champions back in 2016 with Caoilin Milton, Aisling Keady, Laura Cunningham and Michelle Duggan. The men’s 4x100m saw a combination of sprinters and distance runners race to a fine time of 48.05 to take 2nd place behind GCH and ahead of NUIG with Conor Duggan, John Cormican, Patrick Noonan and Luke Evans.

Onto the 4x400s where both teams provided an exhilarating spectacle. The womens team lined up as Arlene Earls to Sinéad Gaffney to Dearbhaile Walsh to Sinéad Treacy. Up against a strong NUIG team, Craughwell got a powerful first 3 legs in to be on NUIG’s shoulder as we entered the final leg where Sinéad Treacy tucked in behind her NUIG colleague until the home straight where she took the advantage and held on to take the victory in a superb time of 4:09.60 – a new club senior record by 12 seconds! The men’s 4x400m provided an equally exciting race with Craughwell racing into a strong lead with Conor Duggan on the 1st leg, handing off to Luke Evans who battled hard against GCH’s sprint team and held a slight advantage handing off to John Cormican. John powered around the track opening up a sizeable advantage when handing off to Jack Miskella. With one of Ireland’s finest U20 sprinters Cillian Greene on the last leg for GCH, the gap narrowed and narrowed but Jack rallied hard on the final 150m to take the victory in a time of 3:37.30 with GCH second in 3:42.63. The team also set a new club senior record but this time by the slenderest of margins with the old record being 3:37.88 set by Nicholas Sheehan, Paul Joyce, John Cormican and Damien O’Boyle back in 2013. 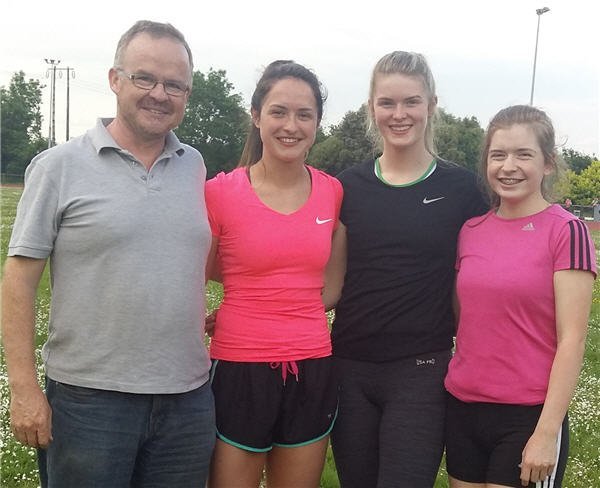 In the throws, several of our athletes took part in unfamiliar events with some excellent throws. Luke Evans won the Junior Men’s Discus with a throw of 15.70m and added the Weight for Distance title with a throw of 4.06. Gavin Cooney placed 7th in the senior discus with a best of 17.82 while Jack Miskella and John Cormican skimmed the unfamiliar disc out to 15.14m and 14.74m. In the women’s discus, Laura Cunningham demonstrated her multi-talents when throwing furthest with a best of 16.66, taking the junior title and also 9 valuable points for the team. Shauna Tobin was second on the juniors with a best of 15.48 which was 3rd best overall while Lorraine Delaney took junior bronze with a best of 14.22. Katie O’Donoghue took senior silver with 14.05 and Orla Ryan bronze with 12.32. Katie and Orla swapped positions for the weight for distance with Orla taking gold with a best of 4.29 (a club senior record!!) and Katie silver with 4.10. It was the first time a women’s Weight for Distance has been held in the Galway Championships so a nice achievement for Orla to be the first ever Galway champion. Gavin and John heaved the 56lbs weight out to 2.96 and 2.36 in the men’s event. 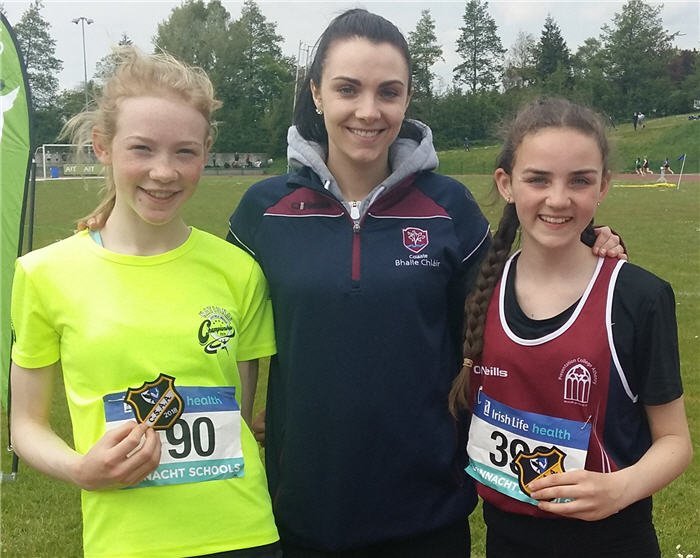 In the triple jump, the club were again reliant on some of our middle-distance stars for points scoring and they didn’t disappoint. Luke Evans leapt to a massive 10.22m to take 7 points for the club and the junior title to add to his collection of Galway titles on the day (5 by my count … 4×400, 400mh, discus, WfD and triple jump!). Gavin Cooney and John Cormican also showed great potential for the event with bests of 9.54 and 8.67 from well behind the board. Sarah Finnegan took the Galway title in the women’s triple jump with a best of 10.05.

The club dominated the women’s high jump with Laura and Lorraine taking 1st and 2nd in the juniors with bests of 1.55 and 1.45 and Katie and Orla doing likewise with similar jumps in the seniors. Ryan Gallagher scored valuable points for the team with a 3rd place finish in the senior high jump and first junior with a best of 1.60m.

Check out John O’Connor’s Flickr page for some great photographs of the event.