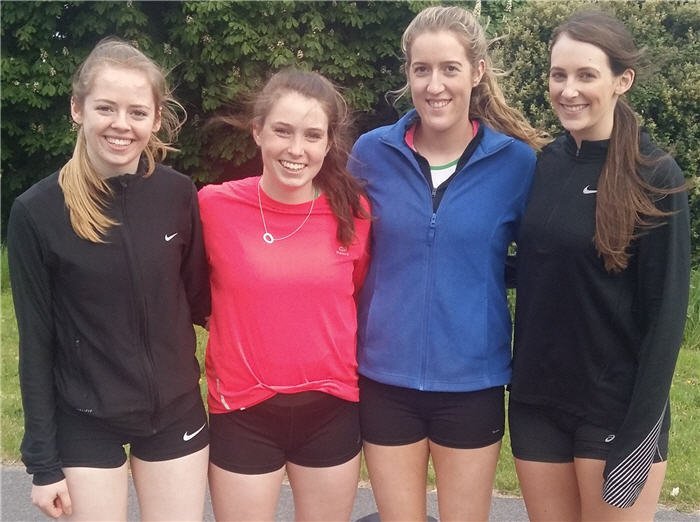 Some exceptional performances from Craughwell AC athletes on day 1 of the Galway Senior T&F in Dangan saw the club top the newly introduced Galway Senior League which will be ran over the 4 days of the senior track and field. This is a new initiative by Galway County Board to encourage participation across a larger number of events and it was a very enjoyable evening with alot of competition in all of the events. The format of the league is that a club’s highest finisher scores points if they place in the top 8, with 9 for a win, 7 for 2nd, 6 for 3rd etc down to 1 for 8th. And it is a combined team of men and women. Craughwell AC proudly top the table after day 1 with nothing between them and second-placed GCH so all to play for in the next round which is on next Thursday,

Despite clashes with secondary school exams, the club fielded a small but powerful team of 11 athletes. Sineád Gaffney got the evening off to a roaring start with victory in the women’s 1500m in a time of 5:20.55. Catherine Noonan and Ciara Sheppard completed a clean sweep of the top 3 places in the 1500m when placing 2nd and 3rd in times of 5:44.86 and 5:48.55. Sinéad’s victory scored the maximum of 9 points in the League.

Up next, Jack Miskella and Patrick Noonan raced to brilliant times of 4:26.16 and 4:28.78 to take 2nd and 3rd places overall, great times considering there was a decent wind into their faces on the backstraight. The 100m got underway as soon as the 1500s completed where Conor Duggan powered his way to victory in the men’s race with an impressive 11.20. In the women’s’ race, Katie O’Donoghue paused momentarily after leaving the blocks as she thought it was a false start/recall but then had to chase after the departing sprinters where she placed 4th in a very impressive 13.74 considering the start she had. 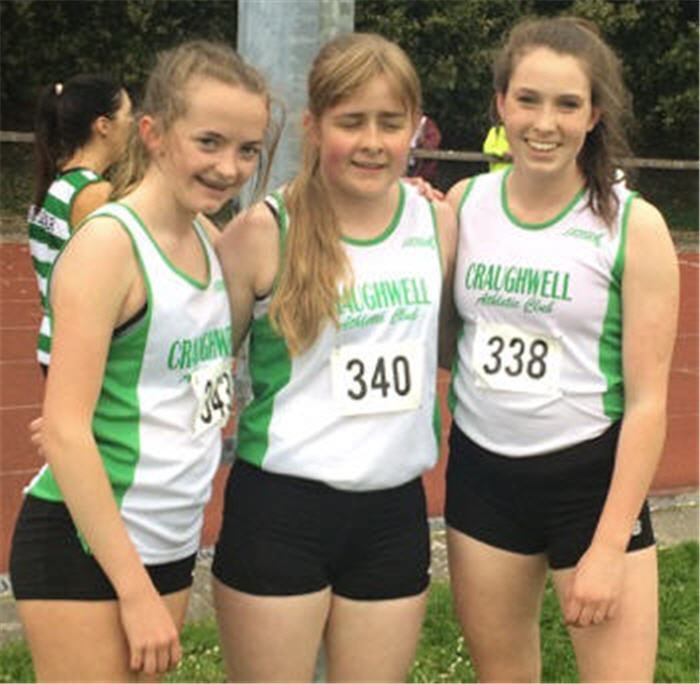 Top 3 in the Women’s  1500m at the Galway Senior T&F Championships in DanganCiara Sheppard, Catherine Noonan and Sinéad Gaffney

Meanwhile when the track action was in progress, the field events were also underway. The women’s long jump was all Craughwell with Katie O’Donoghue leaping to the Galway senior title with a super PB leap of 4.92m … taking off from at least 30cm before the break-line so the magical 5 metre mark beckons for Katie sometime soon.  Aisling Keady took victory in the Junior category with a fine leap of 4.62 while Sinéad Gaffney make a rare appearance in the long jump with a superb 4.69m leap with Orla Ryan in close proximity with a best of 4.58 – a great competition between the 4 girls. Gavin Cooney was another to make a rare appearance in the long jump, taking 6th place with a best of 4.92m and scoring valuable points for the team.

The in-form Katie continued to clock-up the Galway Championship titles with victory in the women’s shot putt with a throw of 8.49m and in the process breaking the club’s senior record, a record which was already held by herself with 8.36m in 2012. Aisling Keady took victory in the Junior grade with a fine 6.38m – a PB for Aisling with the 4kg shot. Gavin Cooney took 9th place in the shot putt with a best of 6.90m – a great example of team spirit as he had never done the shot before and the 7kg weight is a considerable challenge when you have never done it before.

The last event of the day was the javelin where again our athetes were throwing it for the first time in some cases. John Cormican who was a late arrival due to work hours running late, glided the javelin out to a PB of 14.19 and 10th place. Jack Miskella threw it an excellent 20.60 to take 5th place. And Katie O’Donoghue completed a memorable day for herself with her 4th Galway title of the day when sending the javelin out to 18.51m to take the victory.

And great work done by the competition secretary Iain Shaw on organising the day and getting the league standings and results out so quickly after the event. Results are here: Day_1_Results_v2.pdf