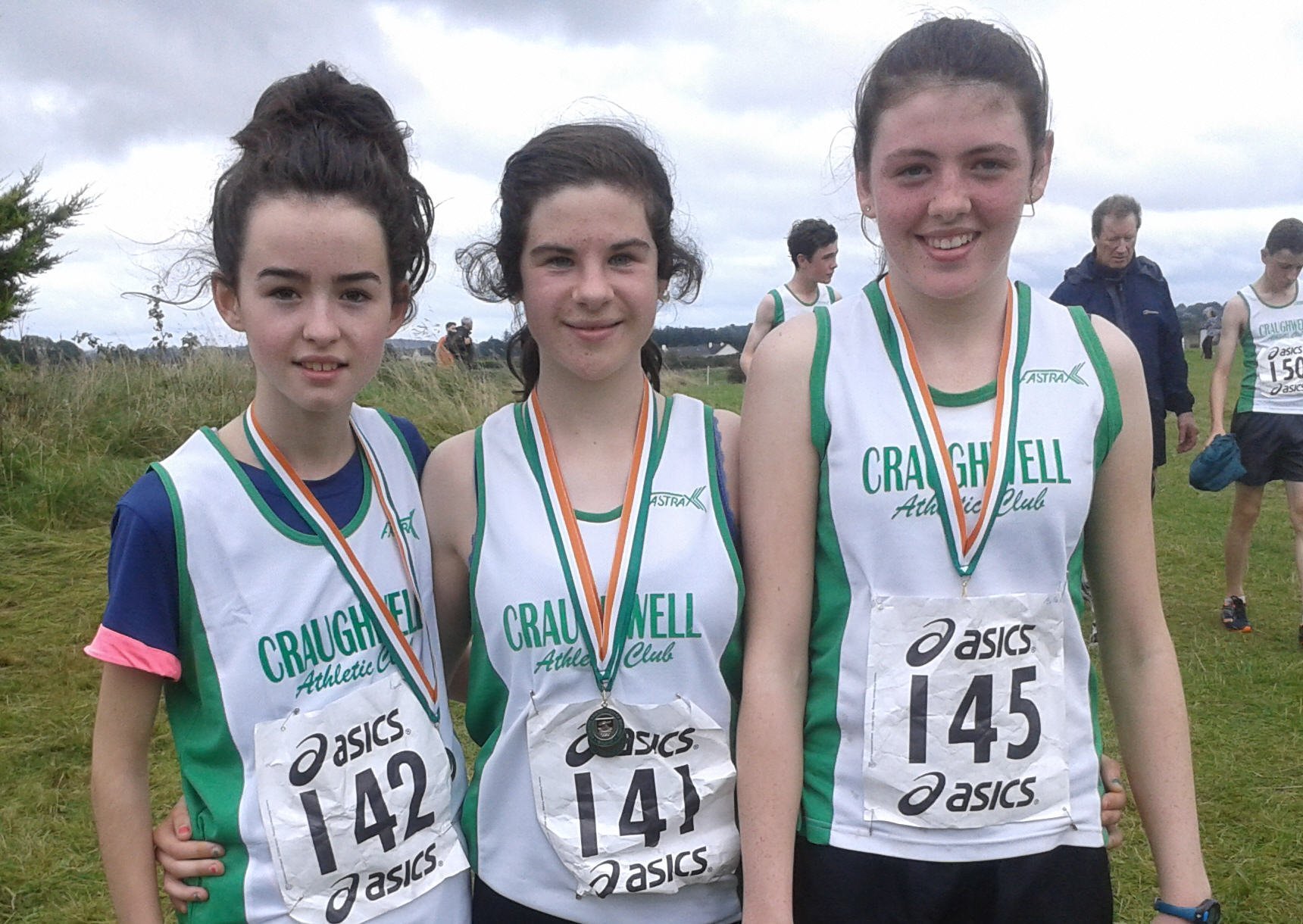 Craughwell AC had another outstanding day yesterday at the Galway Even Age Groups and Adult Cross Country Championships which were held on Loughrea AC’s challenging course at Bushfield.

The day got off to a great start for Craughwell with Rebekah Flynn comfortably taking the Galway U10 title and Emily Miskella getting up to take the silver with a fine performance over the 800m distance. The Craughwell AC U10 boys also performed superbly with Liam Mulveen first home in 5th place. Check out Seamus Lynch’s article for full details on the U10 performances.

The U12 girls 1500m provided one of the highlights of the day for the club where Craughwell AC athletes recorded an individual 1-2-3 in a strong field.

Niamh Niland took the individual honours to add to her recent Galway East Primary Schools title, with Ailbhe Miskella placing 2nd in one of her best races to date and Jennifer Hughes just pipping Connacht 600m Champion Chloe Casey of Loughrea AC for the bronze medal. And the top-drawer performances didn’t stop there with Mia Waters taking 5th place for the unbeatable team score of 11 points. The rest of the girls also ran impressively with finishing order as follows: Sarah Woods 11th, Sarah McCartin 14th, Aoife Kelly 15th, Eva Kelly 18th, Sinead Keane 23rd, Emma Jane Moran 24th, Erin Dolan 29th, and Lauren McNally 35th. The boys U12 also saw some great performances with Finbar McFadden taking individual bronze and leading the team to silver medals, tying with GCH on 23 points but just losing out on the 4th placed scorer. The rest of the team came in as follows:- 4 Sean Cannon, 6 Kyle Moorhead, 10 Gavin Kelly, 11 Liam Leen, 12 Shaun Gilligan, 13 Jack Farrell, 15 Eanna McDaid, 17 Eoin Staunton. It was a particularly impressive run for some of the U11s in the field for both girls and boys. 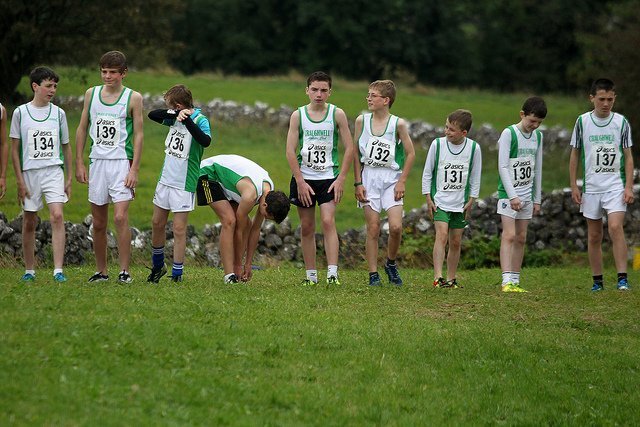 Craughwell U14 Boys line up at race start

In the U14 girls, another strong team performance saw another team title come our way with Rachel Hughes leading the way in 6th place following by Sinead Kennedy 9th, Catherine Noonan 11th, Sarah Phillips 12th, Fiona Commins 13th, Tara Farrell 16th and Saoirse Coppinger 18th. The team took the Galway title with 38 points, just ahead of Athenry AC by the narrow margin of 3 points. The U14 boys comfortably took their team title, with Oisin Lyons cruising to victory. Conor Lee made a welcome return to cross-country action with a 5th place finish while U13s Adam Heneghan and Galway Primary Schools Champion Patrick Noonan stepped up to take 6th and 8th places for a low team score of 20 points. Sean Delaney placed 10th, a fine performance in his first cross country race in a while. With 5 more runners in the field, the club also took a set of bronze medals in this race with Luke Finn placing 14th, Sean Noonan 16th, Gavin Forde 18th and Brian McKermitt 19th.

The U16 girls continued the welcome trend for our girl’s teams with another Galway title, this time just pipping GCH for the title by a single point with a score of 24 points. Dearbhaile Walsh led the team home with a 3rd place finish. Aoife Greene had one of her finest runs over the cross country turf with a 6th place finish. Grainne McDaid took 7th place, plenty more to come from this fantastic runner later in the season, and Laura Keane in her first cross country race ever took 8th place with a very comfortable performance and loads of promise for the future.

The result of the team competition for the U16 boys was a foregone conclusion with a fantastic team out from the club. Liam Moran took the individual victory in this occasion with a fine run, James Cahalane 4th, Oisin Doyle 6th, Matthew Barrett 7th, Diarmuid Harvey 9th, James Delaney 11th and Brian Loughnane 12th. Ben Garrard had to withdraw during the race due to an asthma attack and Diarmuid Harvey suffered similar difficulties at the end of the race. Thankfully both athletes are fine and particular thanks to the paramedic from Loughrea who attended to Diarmuid after the race.

The final 2 races of the day were the women’s 4k and the men’s 6k. Ellen Treacy made her return to cross country after a number of years absence to run in the U18 category and had a solid run. In the men’s 6k, see Mark Davis’ article for full details of our performance. We had a very strong team in action and were one of the unluckiest teams ever with injuries forcing a number of our leading athletes out of the race. Mid-way through the race, it looked as though the club would take the top 4 places but alas on this occasion that was not to be and we will have to wait another year to wrest the Galway title away from GCH! And a big well done to Jason on taking his first senior XC title … making it 3-in-a-row indiivdual titles for Craughwell AC!

Full results of the races are at :-