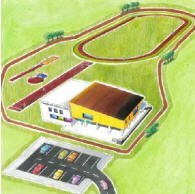 Exciting news reached the club this evening with the announcement of the 2017 Sports Capital Grants which included a grant of €72,000 to Craughwell AC towards the provision of an indoor athletics training hall!

The club is indebted to Junior Ministers Ciaran Cannon, Seán Canney and Seán Kyne for the invaluable advice they provided during the preparation of the grant application. Our members’ catchment areas span the constituencies of all three Deputies and on behalf of these members, the club wish to again express their gratitude for their help.

The grant was applied for in February of this year and following assessment by the Department, the Minister today announced the awards. The grant is one of the largest awarded to local projects in County Galway under the 2017 Sports Capital Program and is testament to the marvellous work being done by the coaches and committee within the club, the tremendous dedication shown by our athletes and the fantastic support that the club has received from the parents and the community for the facility development to date. It is also worth noting the diligent work of the civil servants who evaluated the 1000s of applications for grants – something that perhaps we forget about at times as I am sure its a herculean effort to evaluate and score so many 1000s of applications in order to come up with a prioritised list.

The club are fortunate also to have the support of Community Finance Ireland who have agreed in principle to provide a further loan to the club as part of the next phase of development. CFI’s mandate is to lend to the community and voluntary sector and the club have found them to be excellent partners in its facility development. In fact, the club has already received 3 loans from them in 2014, 2015 and 2016 to assist in the development.

Most of all, the club is indebted to the fantastic team of over 40 coaches and committee members who drive the club forwards and to the many wonderful families who financially support the club’s facility development.

The club’s Executive Committee are currently looking at all aspects of the funding of the next phase of development and will shortly be communicating the details of the proposed facilities to include in the next phase to members and seeking financial support.  It is hoped to address all of the facilities prioritised by the survey conducted by the club during the summer, including the athletics training hall together with a 4-lane 400m track, throwing areas, a perimeter walking/jogging pathway and toilets/changing room facilities. Given the progress the club has made in the last 4 years, we are very confident that we can deliver these facilities in a short number of years. But it will require a major commitment from everyone within the club.

The grant award is wonderful news for the club and the first step on the way to the next phase. It is also a big vote of confidence in what we are doing both for the social and recreational health of our members and also the development of athletes to their potential, some of whom will hopefully go on to great things as young adults and many of whom will have developed a great habit of regular exercise which will stand to them for their lifetimes.