Promising start to the 2018 XC Season

X Country season kicked off today in the Palace Grounds in Tuam with Day 1 of the County Championships.

We had a fantastic representation from all age groups and it was wonderful to see so many Craughwell vests. The day was perfect for x country running, although a little blustery, temperatures were mild and the rain held off.

The first race of the day was the U10 Girls. This would be considered to be one of the tougher courses with plenty of long hills. However, all girls battled bravely and each and everyone of them had fantastic races with 6 of the runners finishing in the amongst the top 16 runners. Running today were Aeveen Kelly, Aisling Lavan, Gemma Cloonan, Laura Morgan. Mia Hollingworth, Megan Smith and Remy Alymer. They were all delighted to finish the race and even more delighted to discover they had won the U10 Gold County Team Medal.

Next were are U10 boys team was made up of all U9 warriors; Daragh Higgins, Calum McMahon, Alan Hallinan and Sean Cloonan. These boys would only have a handful of races beneath their shoes, and yet still understood and embraced the challenge. Alan ran a brilliant tactical race to finish 1st overall and his team mates had strong performances and although they missed out on a team medal they managed to storm into to 4th place overall. 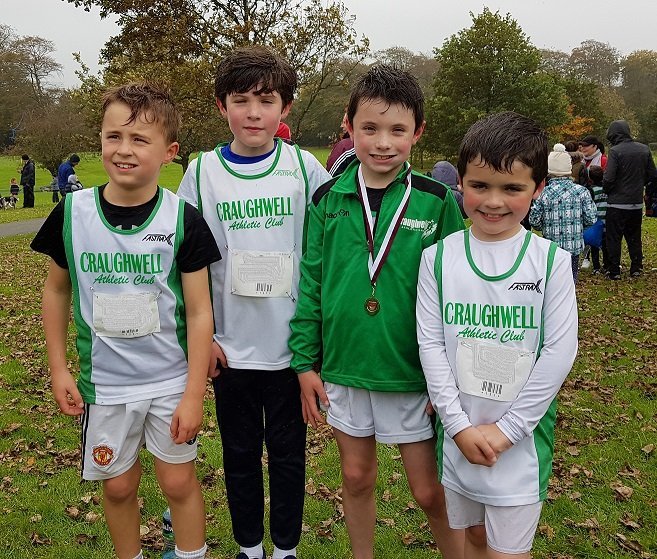 In the U12’s girls race we had only 2 runners and Ameile Bocquet (younger sister of Shauna and Mathys) had a strong race to finish in 19th place followed by Claudia McGuiness with a fine finish in 24th place.

Although U12 boys were unable to field a team, 3 brave runners (Fionn Higgins, Keelan Moorhead, Darragh Kelly) battled hard throughout the race to come in 6th, 16th and 26th positions.

The girl’s u14 was a close contest over the 3000m course with Craughwell girls winning Silver in the teams.  Despite having just run a big new 800m pb two days ago, Fauve Aylmer had a fine battle at the front all the way with eventual winner Isabella Burke of GCH.  A gap built, which Fauve was making inroads into over the last 500m, but not before the finish line arrived!  Clodagh O’Meara also ran a standout race, building from the mid pack and catching athletes all the way. With 100m to go she caught and passed the 3rd placed athlete from Ballinasloe, but was unable on this occasion to hold her off for the Bronze, finishing 4th.  Next home for Craughwell was Siofra Davis in 16th place, followed by Alana Grogan (18th), Holly O’Boyle (19th), Erin Kelly (21st) and Muireann Leen (23rd). 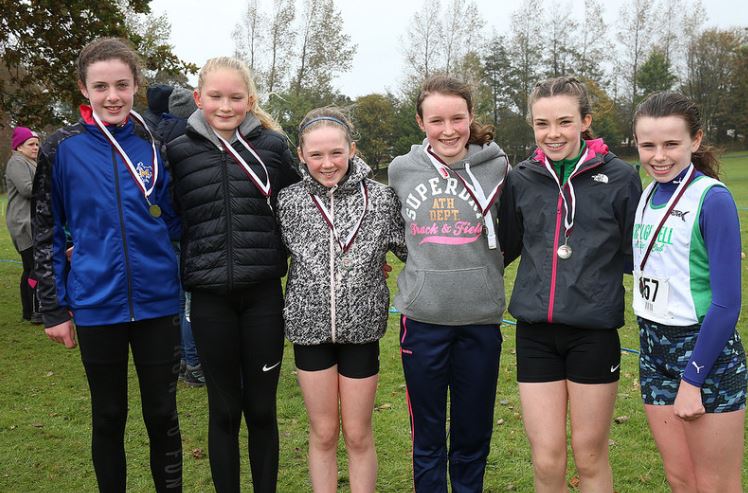 In one of the performances of the day, Mathys Bocquet stepped up in age from the u13s and put on a masterclass of front running to win with ease.  The talented athlete dominated a strong field of older athletes from the start, building an unassailable gap early on and extending it all the way. Cian Lavin shook off a recent injury to power his way to a strong 7th place finish, not far ahead of teammate Evan Hallinan (9th). Sean Liston (12th) rounded out a very strong Craughwell performance good enough to take Silver. 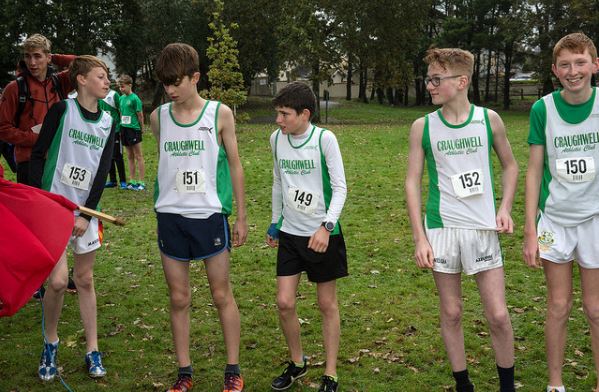 Silver Winning u14 Boys Team including Athlete of the day Mathys

The Craughwell U16’s boys had only 3 athletes in this one, but they made up for the lack of a team by taking all the individual medals.  With his excellent track season, Sean Cotter of Craughwell was the clear pre-race favourite and he lived up to his billing by taking clear victory.  Running together with teammates Oisin Davis and Ross McGuinness, they used excellent teamwork to reel in and overtake the early South Galway leader and continued to extend their lead until Sean made his solo break with 1km to go. Oisin finished second with Ross a very close third. 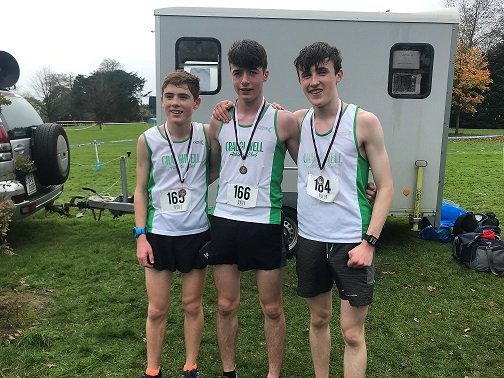 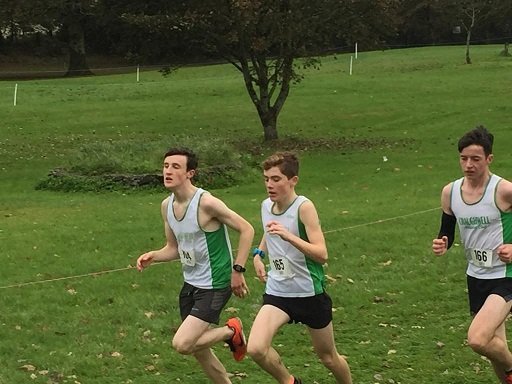 U16 Boys at half-way 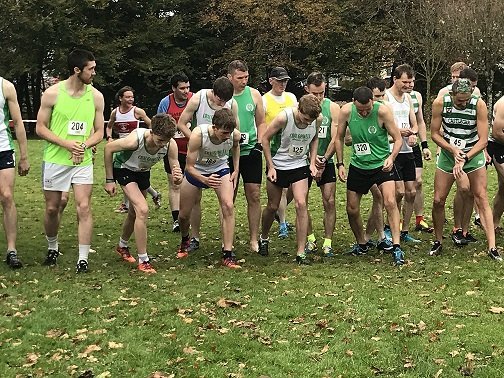 Patrick Noonan (U18) immediately took off like a bullet and charged away from the crowd down the first hill. He soon settled into a very steady pace along this hilly 6km route. He maintained a fine position throughout the race and appeared very comfortable coming in the final straight to take a Bronze County Medal. Next across the finish line was Kyle Moorhead (U17) who stepped up from U17’s to help field a team and had a solid run and just missed out on the medals coming in at 4th place.

William Fitzgerald (U18) who is normally seen taking the lead and dominating the race, went out hard, but found it difficult on this occasion to stay with the leaders as fatigue in his legs set in quickly. Nonetheless he had a great  6th finishing position.

Sean Noonan (U18), has taken almost a year away from distance running and we are delighted to see him back in the field. After only a week’s training he agreed to run and help make up an U18 team. He retained a steady position throughout the race and coming into the home straight charged up the hill to take over a runner and finish in 8th place. 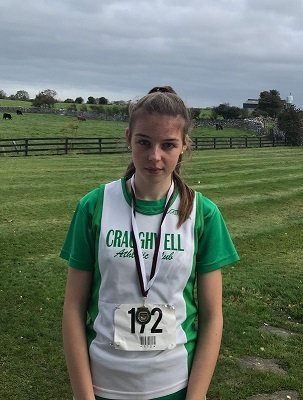 This is a superb start to Ailbhe’s X Country season and a deserved award for an athlete that has put tremendous effort and demonstrated both patience and consistency in her approach to training. Ailbhe stepping up from U17 to U18 dominated her age group from gun to tape. Each Km split was run with precision. Amongst a field of athletes ranging from junior to senior athletes she placed along with her Gold U18 medal, 4th overall in the race showing a very promising season for her.

A big thank you to Mark who provided information on many of the races above and for the report below.

The Senior Mens team is finally starting to show “Green Shoots” after a few years and a changing of the Guard in the squad. Jamie Fallon, ever-brave took to the front of a high-quality field and led strongly the chasing pack of Brendan McDonnell and Keith Fallon for the first 3km of the 8km course.  Young American McDonnell of GCH & NUIG showed incredible class to take charge from half way despite the weight of a 70-minute half marathon in his legs from yesterday.  He was irresistable on the day and when he made the push he quickly built an unassailable lead on his rivals for the remainder of the course.  Despite getting passed, Jamie pushed on and appeared to solidify Silver with a lap remaining, the gap growing to 15 seconds between himself and Keith.  However, stranded in second without a target is a hard position to defend and Keith is a formidable athlete with a “rabbit” to chase!  In the home straight Keith duly struck home to nick Silver.  Bronze for Jamie, but another brilliant performance from a man still very early on his comeback trail.

Jack Miskella had a lovely performance to take 8th overall and 7th Senior (which I think secures a position on the Galway County Cross Country team).  Jack had a great first half and conceded some positions in the second half and is only starting to scratch his potential.  Another 800m specialist with even less endurance work under his belt is Gavin Cooney – Gavin put on a sterling performance to come 16th overall and 8th Senior.  Despite his reservations, David Evans answered the call and without him we wouldn’t have had a team.  The M50 athlete is made of incredibly tough stuff and ran brilliantly to take 22nd position – he embodied the spirit of cross country and emptying the tank.  The results are provisional but David almost certainly secured an individual M50 medal, I’m unsure yet of the colour.  The team score was 49 points which was 3rd, ahead of big town teams like Tuam and just two behind Castlegar on 47..

Overall – to me, Galway Cross country running is starting to look a little healthier!  Some positive signs for me: 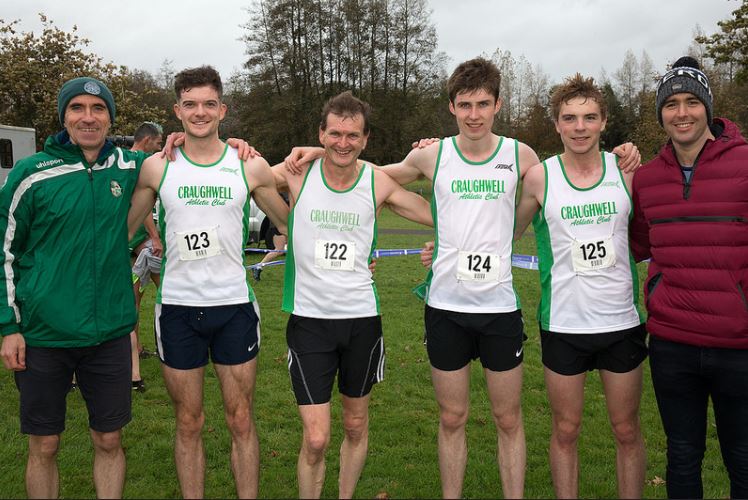 The Senior Team with a couple of fans!