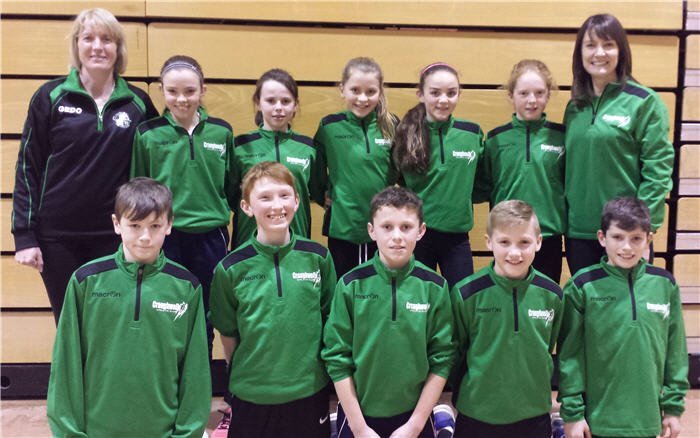 On a marvellous night of athletics at the AIT Grand Prix, the cool calm and clinical Craughwell U13 relays stole the show in the opening events of the night when winning both relays with an exquisite display of sprinting and baton changing from all members of the 2 teams.

The girls were on the track first and with Katie Scully handing off to Jade Moorhead to Aoibhe Carr to Fauve Aylmer the team combined to build a substantial lead over the other teams and win in style. Ablely backed up by substitute Clodagh O’Meara, the team ran an impressive time of 2.02.

The boys were up next and put in an equally powerful display of sprinting with Evan Moran handing off to Evan Hallinan to Conor Gilligan and to Cian Lavan, recording a time just under the 2 minutes and winning by a substantial margin and again with a very strong substitute Eoin Spellman waiting on the wings should anyone get injured.

It was a super experience for the athletes and a great honour for both them and the club to take part and come away with 2 victories. In the 3 years since this event was part of the progam, this is the second time the club took both victories, winning both races in 2015 and 2017 and placing 3rd and 4th last year.

And well done to AIT on putting on a tremendous show yet again with a dazzling array of international stars in action. And hopefully we will all be back again next year for the yet another amazng night of athletics!

And if you missed the action, you can get it here:- https://www.youtube.com/watch?v=6vwV5Jw7OxM. The relays are the first event but unfortunately don’t seem to have been on the live stream.

I have uploaded a video of the 2 races here:-