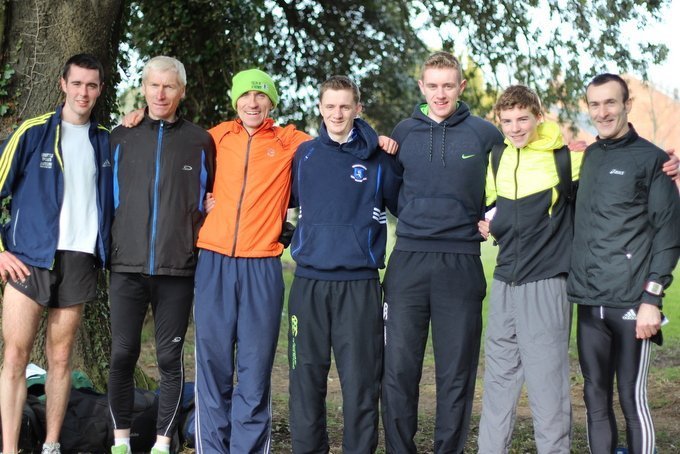 Despite injuries, last minute bouts of sickness and general disorganisation, Craughwell AC fielded two strong teams at the national road relays in Raheny today.  In perfect if breezy conditions the veteran men’s team of Mark Davis (1 lap), Gerry Ryan (2 laps) and Martin Corcoran (1 lap) won a historic Bronze in the M35 in 20:00 exactly.  We came up hopeful of a chance, but doubts quickly crept in when I lined up at a very crowded and youthful looking startline!

The medal was a great achievement considering the average team age of 47, and we beat several strong relatively young teams including Clonliffe Harriers and others :-).  I actually led for about the first 800m and as the unfamiliar pace started to bite in slipped back to about 5th or 6th at the changeover.  It’s a good feeling knowing you are handing over to the likes of Gerry Ryan!

Gerry duly ran the fastest two mile leg of the vets event in 9:58, hauling us up into 3rd position.    (he gets a nice mention in the AAI report here).  Each lap is about 15-20m longer than a mile.  Martin Corcoran took the charge from Gerry with a decent but not unassailable lead on the 4th placed athletes.  Martin hasn’t been training hard since the cross country, but the man is made of incredibly tough stuff and he somehow found the reserves to hold off the challenge of the Clonliffe Harriers athlete and hang on to a historic Bronze, and surprised many by breaking the Dublin dominance in the event. 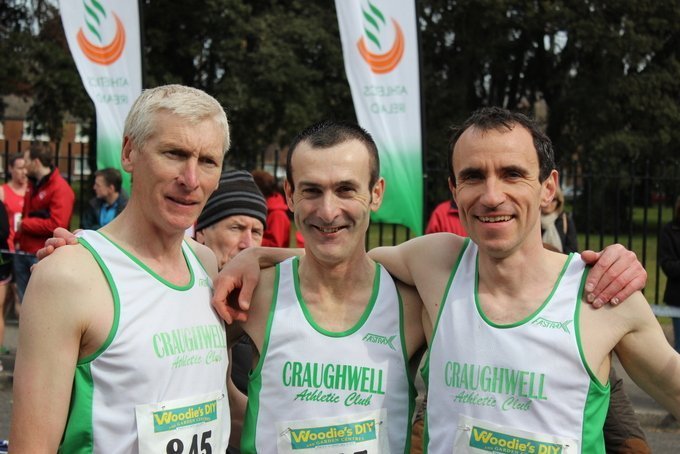 We had two Senior teams entered, but in hindsight this might have been a bit ambitious – relays are very tricky to get teams together for, particular when they are all the way across the country.  The standard in the road relays is top notch, and there is no doubt that the standard in the Senior event this year was also far higher than last.  The field was littered with athletes of the highest national caliber including the likes of John Travers, Alberto Sanchez, Mark Kirwin and others.  There were no weak teams in the field – all of them were deep with running talent. 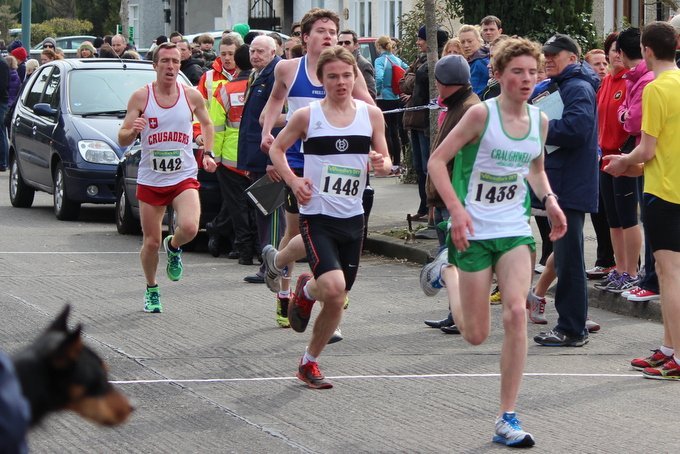 The youthful Craughwell AC team wasn’t intimidated however and performed brilliantly.  Jamie Fallon-Spellman laid it out there leading the chase pack with a strong 5:01 first lap.  With a hard week’s training in his legs, Jamie found it tough to maintain the pace but handed off nicely to Conor Gillen (seen below battling with Kevin Chesser) who had a fantastic leg, maintaining his position to hand off to Neil Greaney. 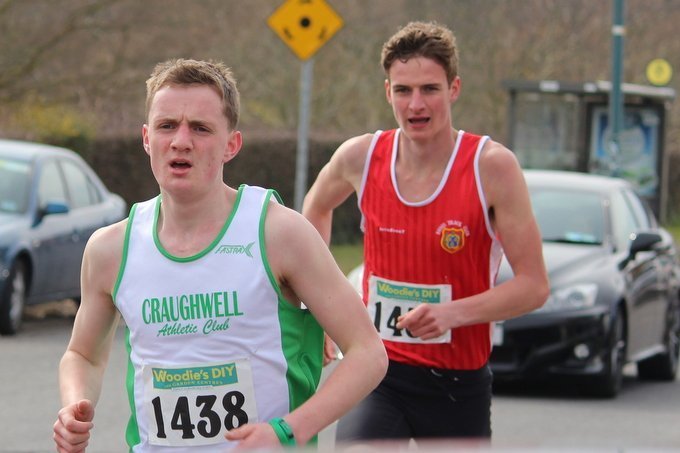 Neil also ran strongly in his first ever 5k holding his place to offload to Jason Broderick for the final two mile leg.  All in all it was a superb performance. 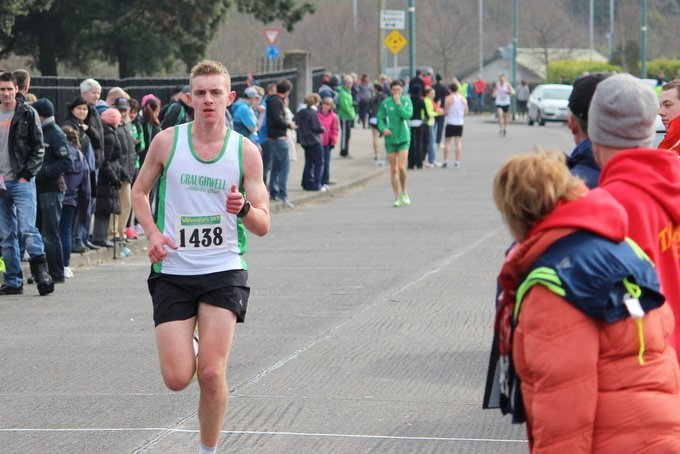 Special mention has to go to Jason who got the call this afternoon to run (when Peadar was struck down with a bug), and left his training course early to drive across the city to meet us an gamely see out the relay in solid fashion.  After the recent pressure of the all-irelands, it was great to see the young team run in an event without any burden of expectation. Apologies also to all those fellows who made themselves available for places as I tried in vain to assemble three teams.

The road relays is a fantastic event and it was a great achievement for the club to get two teams in it – the only Connacht club to do so.  I’m not sure when the last time a Galway club took a medal in the event is.. perhaps there’s some statistician out there who knows..?