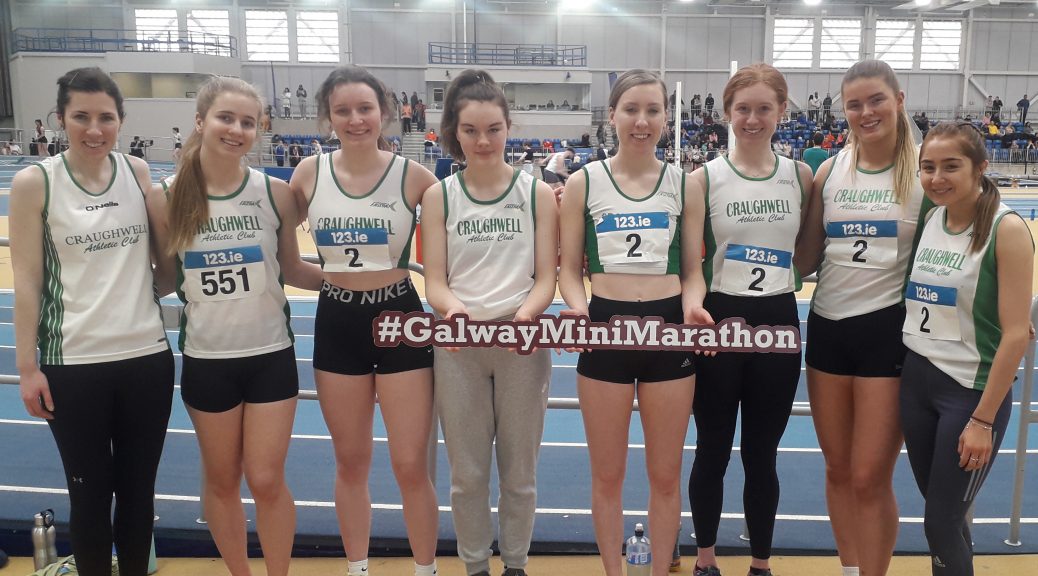 Round 1 of the National Indoor League took place at the National Indoor Arena on Sunday in Abbotstown in Dublin where Craughwell AC dug deep to record some fine performances across the events which should place them amongst the leading clubs on the day. With 16 clubs entered, it was probably the highest numbers ever in this event.

Siofra Davis was first into action where she was taking part in the Pole Vault. Siofra is new to the event and only had the opportunity to practice it into the sandpit in Craughwell up until now so this was her first time competing on the actual mat. In a gutsy performance, Siofra cleared both the opening height of 1.50m and then 1.70m to place 5th and score valuable points for the team. Caoimhe Kilkenny was next into action for the club where she was our scorer in the 60m – Caoimhe had a fine run to place 4th in her heat in a new PB of 8.24 and 7th overall.

Meanwhile at the shot putt, Laura Cunningham threw the shot out to a massive 9.08m PB on her first attempt to take 3rd place overall. Her next best throw of 8.80m would also have been a PB – significantly ahead of her previous best of 8.33m. Laura only had a short break of 15 minutes from the shot before the long jump competition commenced where she jumped a solid early-season 4.86m effort on her first attempt before drifting back from the board a little on the remaining attempts – placing 7th overall in a high-quality event where the top 5 all went over the 5m mark.

Next to the track, Sinead Treacy ran a blistering race in heat 3 of the 200m, coming from behind in the final metres to take victory on the line by the smallest of margins with one-hundredth of second separating Sinead from the 2nd-placed athlete in times of 25.44 and 25.45. Sinead’s time was good enough to take victory overall and score a valuable 17 points for the team. The team scoring works with 17 points to the victory, 15 pts to 2nd place, 14 for 3rd, 13 for 4th etc. down to 1 point for 16th.

Caron Ryan took to the track next for the Womens 3000m where a leading group of 5 broke away early in the race and Caron putting in a strong performance on the gruelling 15 laps to take 5th place in a time of 10:41.67. In the individual races, Etaine Moran made her debut for the club in the 60m sprint with a solid finish to place 4th in her heat when clocking a time of 8.72. And later in the day, Caoimhe Kilkenny raced to an impressive 200m PB in a time of 27.96 – a PB of almost half a second for Caoimhe.

The final league race of the day was the lung-busting leg-wrecking 4x400m relay where Siofra and Laura bravely joined Sinead and Arlene who are well used to 400s but Siofra and Laura rarely run them. The team are pictured below before their race when they were still smiling!

Arlene led the team off with a blistering first leg in around 63 seconds before handing off in 2nd place to Siofra who ran a fine 67 seconds. Siofra held that place to hand off to Sinead who raced around the track in a blistering 59 seconds to solidify our place before handing off to Laura for the final leg. Laura started out like an express train before easing off a little after 100m and ran a fine 65 seconds for her leg to hold second place in their heat. The team’s time of 4:15.34 took 5th place overall. And a new club senior record into the bargain!