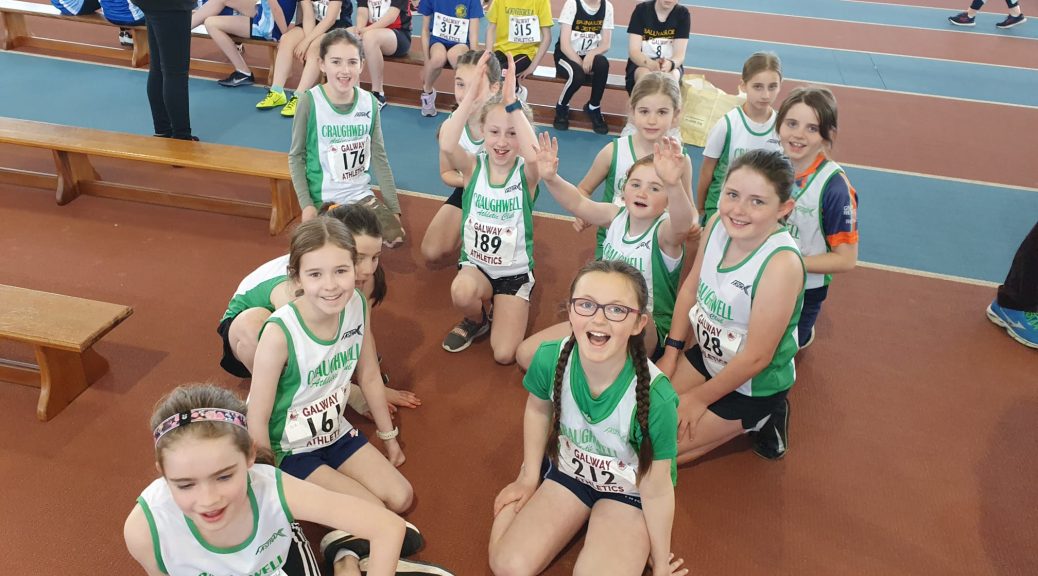 Craughwell AC’s younger age groups descended on Athlone IT in their scores for the rescheduled Galway Indoor Championships where were held on Sunday for the U9, U10 and U11 age groups.

Due to the pandemic, it was the first indoors championships for most of these athletes with only a small number of the U11 group having competed here 2 years ago as U9s.

The action kicked off with the U10 relays and the U11 girls at the long jump. We had large contingent of U11 girls in action in the long jump, with the group split between 2 pits. Lola Whitney-Mangan was in fantastic form at pit 1 with amazingly consistent jumps of 3.31, 3.31 and 3.32 metres to take the Galway title – a title Lola had also won as an U9 in 2020. An impressive performance ahead of 37 other competitors.

Also in flying form, Laoise Colleran raced to a fantastic Galway title in the U110 Girls 60m in a time of 9.78. Ruby Maher was very unlucky to finish just outside the medals in the same race in a brilliant time of 10.02 – only 8 hundredths of a second from the medals.

Ruby, Laoise and Lola combined with Reailtin Ward and sub Zara Kearney to take a convincing victory in the U11 Girls 4x200m in a time of 2:16.70 – almost 5 seconds clear of the 2nd place team.

Jack McNena has an impressive performance in the U11 60m sprint, taking the silver in 9.64, just 4 hundredths of a second from taking the gold.

The U9s also had a great showing in their debut on the track with Ava McGlynn taking a brilliant silver medal in the U9 Girls 60m in a time of 11.01 while Cathal Niland repeated that feat with 10.78 to take the silver medal in the U10 Boys 60m and a fine performance from Oran Gillespie to place 5th in 10.89 just 0.04s from the medals. Cathal Niland followed up his sprint performance with bronze in the long jump with a leap of 2.31 while it was unlucky 4th again for Oran Gillespie just 2cm further back with a leap of 2.29m. Rachel Cronin had a fine 5th place finish in the U9 Girls Long Jump with a leap of 2.26m. And in the relays, the U9s put in some super runs with both the boys and girls teams finishing in 5th place in times of 2:48.86 and 2:53.01.

The U10 girls took to the track for the first event of the day where a brilliant performance saw the bronze medals in the 4x200m taken by the team of Emma McGovern, Muireann Kelly, Roise Beattie and Isabel Maher in a time of 2:36.75.

The U11 Boys landed the club’s 3rd relay medal of the day with a super bronze medal with their team of Conor and Nathan Quinn, Conor Mannion, Jack McNena and sub Erik Daniels – making the podium in a time of 2:15.77.

There was hard luck also for Roan Healy and Aaron Burke in the U10 Boys Long Jump where they placed 4th and 5th with leaps of 3.13 and 3.12 only fractionally outside the medals. It was a similar experience also for Erik Daniels with a 5th place finish in the U11 Boys Long Jump with an excellent leap of 3.20.

There were many many more fine performances throughout the day, read on for the full details.