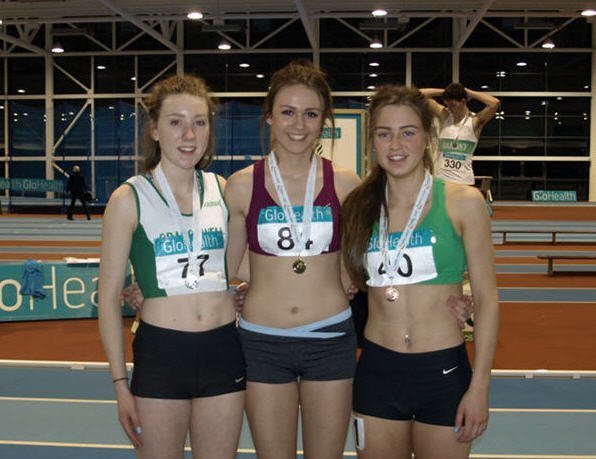 Sinead Treacy resumed her National medal-winning ways at the National Junior Track & Field last weekend with a fine silver medal in the Junior Women’s 200m in a time of 25.20. Sinead is in breath-taking form having earlier won her heat in 25.41 and having run 25.57 last weekend in the Galway Indoors. Earlier in the day Sinead narrowly missed out on making the final of the 60m by the slim margin of .03 seconds when placing 4th in her heat in a time of 8 seconds flat.

Sinead’s good form continued in the National Senior League today where she raced to victory in the 200m in a 25.32 to earn the maximum 9 points for the Craughwell team. Sinead was joined in the action by Aisling Keady who was making her debut in senior competition. Aisling took part in the high jump in the absence of Cathriona Farrell due to work commitments and jumped exceptionally well at this level to take joint 1st place with a leap of 1.46m. Their scored combined with a 3rd place finish for Sarah Finnegan in the triple jump with 10.13m, a 5th place finish from Sinead Gaffney in the 400m in a time of 64.02 and 6th place for Ciara Greene in the 1500m in a time of 5.37.22. The team’s performance over the 2 rounds of the league puts them unofficially at the top of the league table going into the final on 7th February.

Another athlete in blistering form at the National Juniors, Conor Duggan placed second in the heats of the 60m in a time of 7.12 before going on to race 7.09 to take 5th place in the final. By our reckoning Conor is now the 2nd fastest man to ever come out of Galway behind Olympian Paul Hession – we don’t have the detailed statistics to prove it but we are not aware of anyone faster other than the legendary Paul! Later in the day, Conor raced a time of 22.90 in the heats of the 200m, 0.25 seconds off the qualifying time that made the final.

There was good news also for both Sinead and Conor during the week with their selection onto the National Junior Relay Panel. This is a huge achievement for both athletes and comes on the back of years of steady progress under the guidance of their coaches Eddie, Martin and Patricia. All going well, both athletes will feature on Irish junior relay teams during the year leading up to the European Junior Championships this July in Sweden if the Irish team qualifies.

Also at the National Juniors, Damien O’Boyle had a fine 1500m with a time of 4.21.56 in the heats and followed it up with a blistering 4.08.40 to place 4th in the final, just missing out on the podium. John Cormican who is making the transition from middle to shorter distances ran a strong 400m to place 5th in his heat in a time of 54.38. Nicholas Sheehan was our last man in action with a time of 2.02.23 in the heats of the 800m, missing out on the final where his time would have taken the silver medal.